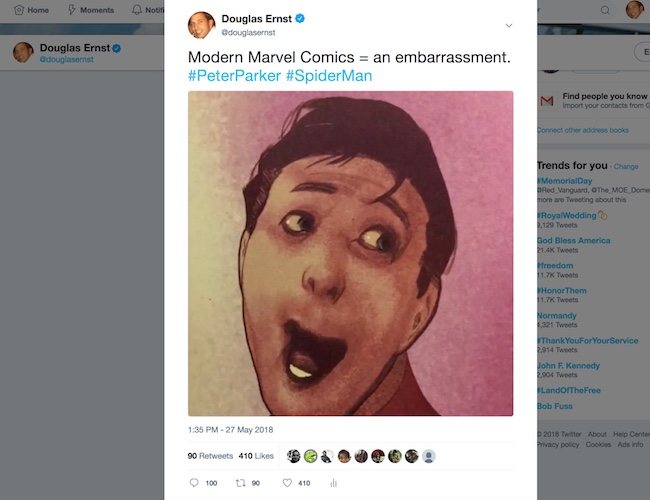 Your friendly neighborhood blogger has covered all things “Spider-Man” for many years. Readers are familiar with the charge that Peter Parker has been emasculated in his own book, but inevitably there are always skeptics.

“Doug, it’s just one issue!” they essentially say. Whether it’s Captain America turning into a de facto Nazi, Iceman randomly turning gay, Iron Man being replaced by a teenage girl for years, etc., the refrain always comes up that Comicsgaters are “exaggerating” or “seeing things that aren’t really there.”

The past few weeks, however, presented the world with ThunderCats Roar — a bastardization of the original and the 2011 reboot — and now Peter Parker in all his “soy face” infamy.

The image is so striking and so telling on a deeper level that a single tweet from my account has reached nearly 30,000 pairs of eyes and over 400 likes in less than 24 hours.

This isn’t a one-time thing. Over … and over … and over again the creative teams assigned to watch over the character have found ways to turn him into an absolute buffoon.

Ask yourself this question: Why are all fictional heroes who represent many aspects of traditional masculinity being stripped of their credibility and turned into gags for ironic hipsters?

Check out my latest YouTube videos on both Spider-Man and ThunderCats for a clearer picture as to what’s going on.

As always, I invite you to leave your feedback section in the comments section below. I’d really like to hear what you have to say.

ThunderCats Roar: SJWs and the Sword of Bad Omens: