It was just one year ago that I made the leap to YouTube and began a channel with the intention of providing honest reviews of comic books and the industry at large. I met up with a small group of individuals who sought to counter the Marvel-approved content that was published by mainstream websites, and before long we started to gain traction.

I knew it was only a matter of time before our collective efforts struck a nerve, and July seemed to be the first of many industry-wide screams by its ideologues.

My latest YouTube review covers the reaction by Dan Slott of The Amazing Spider-Man to guys like Diversity & Comics and Captain Cummings. His obsessive blocking of fans and critics on social media has even earned him a new nickname: Slotto Octavius.

Tune in for all the details on Slotto Octavius, the decision to liken his efforts to Judge Dredd, and the Twitter hashtag #BlockedByDanSlott. As always, feel free to sound off in the comments section below. I’m always eager to hear what you have to say.

Editor’s Note: I’d like to say a big thanks to Mr. Dystopian for the artistic compliment below! 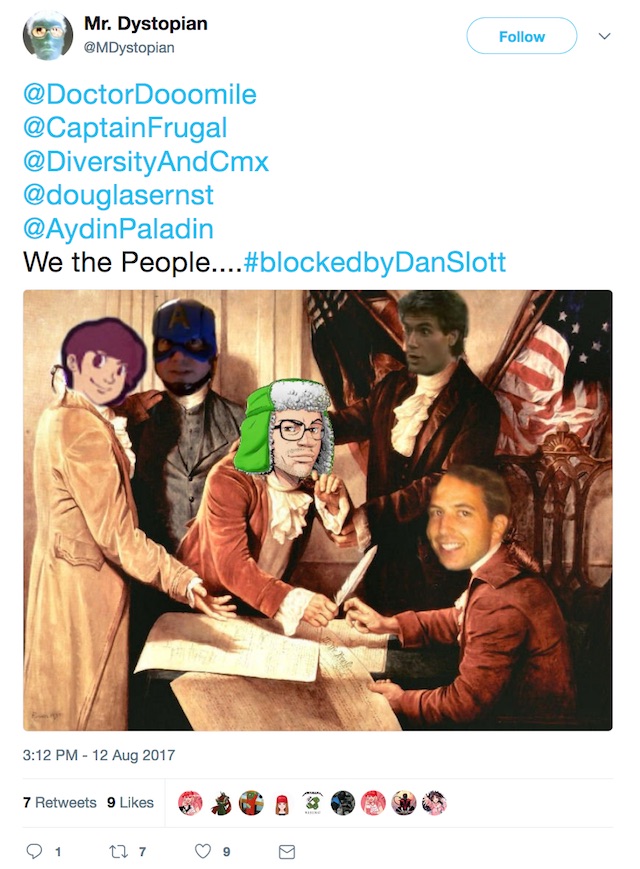 Members of the comic industry recently got a little testy when Chuck Dixon and Paul Rivoche went to the Wall Street Journal about a bias against conservative creators in the industry. Marvel’s Tom Brevoort quickly assured everyone that no “blacklist” exists at Marvel (Can you name one openly conservative writer who is employed there?), and then surmised that it wasn’t conservatives that editors have a problem with, but certain kinds of “behavior” **cough** that might translate into not getting employment.

Sure, no “blacklist” exists, as long as you don’t consider The Amazing Spider-Man writer telling Christians to move to “Christ-land” as evidence that maybe — just maybe — Marvel isn’t too friendly towards guys like Messrs. Dixon and and Rivoche.

Here is Dan Slott’s response to the SCOTUS ruling on the Hobby Lobby case.

Imagine if I found out that my local pool was going to have very specific “women-only” hours for Muslim women, who don’t want to be seen by men outside their immediate family. We’ll use Seattle as an example:

Seema is from Pakistan. Sahra is from Somalia. Both are Muslim. They say having a women-only swim program allows them to get some exercise while observing their religious customs. Seema says their religion requires them to cover in front of men. “We don’t cover our heads in front of our husbands, our dads, brothers,” she says. “But when we go outside we’re supposed to cover for woman’s modesty.”

What if I pulled a Dan Slott-like move, stretched my bigotry muscles, and told Muslim women: “This is America. Go find pools in ‘Muslim Land.'” I’m pretty sure my employer would fire me.

And then there’s this gem:

The thing with Hobby Lobby and other small religious businesses is that they took their grievance to court — and won. They followed the rule of law and the highest court in the land agreed with them. That is not an “asshole” move, but yet Dan Slott likens Christians to “conquistadors” and “assholes.” It’s incredibly mean, but also cartoonish; it’s reminiscent of 1992’s Office Space, where the character Peter Gibbons says “You know, the Nazis had pieces of flair that they made the Jews wear.”

Speaking of the Jewish faith, it’s now well-known that Dan Slott is very protective of his ancestry (just don’t mention that his own characters get taken to task by Bleeding Cool for engaging in “Nazi-like experimentation”). How would the Marvel scribe react if someone went full-Dan Slott on Jewish people like he does on Christians and Americans who are strong advocates of the Second Amendment?

Here we see another example of Dan Slott’s intolerance: 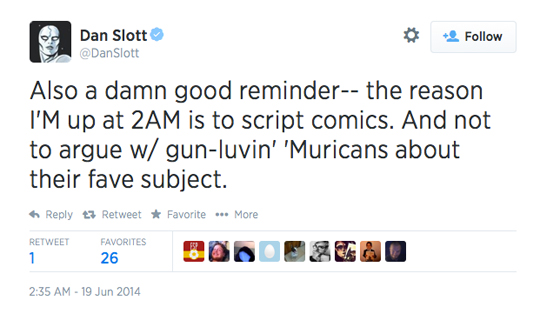 Hube over at Colossus of Rhodey made a good point shortly after the tweet went live: How would Dan Slott react to someone who tweeted him in a New York Jewish accent about money?

The tweet was deleted — down the Memory Hole — Dan Slott’s go-to move when he gets caught saying things that reflect poorly on his employer. It’s a good thing the Internet is forever.

If you are a fan of Marvel comics who just so happens to be a Christian, a Second Amendment advocate or simply someone who just doesn’t like seeing bigotry broadcasted via social media, you should probably think twice about buying products put out by Dan Slott. You might want to also consider contacting Marvel. It doesn’t have many standards these days, but there are a few that are hanging by a thread. 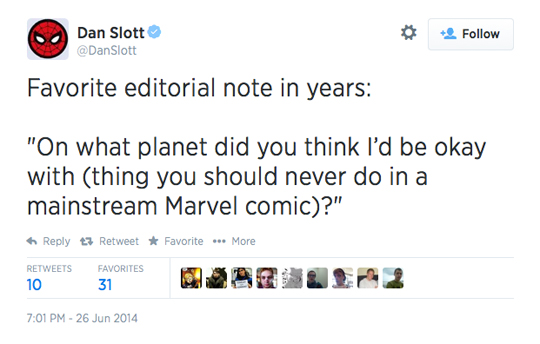 Slow clap for Dan Slott. He’s the guy you want to find when you want tweets infused with anti-Christian bigotry, or Marvel comics that are consistently trying to see how low the bar can go.

Update: Dan Slott continues to read this little old blog and attack it from afar because, as we all know, it’s much safer to allow Twitter groupies to massage your ego than to actually defend the indefensible.

Question for Dan Slott: If I just had a beef with a few Jews over a religious issue with political implications, and I told them to go to “Jew-land,” how would you respond? How would my employer respond? That’s right — you’d go ballistic. And then my employer would fire me. But you get to tell a bunch of Christians to go to “Christ-land” without consequences. Hypocrite. 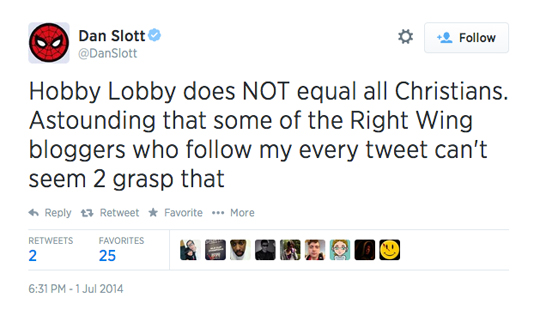 Update II: Marvel’s Tom Brevoort has weighed in. No response to the question “If Chuck Dixon told Dan Slott to go to ‘Jew-land’ over a religious gripe, would he still get work?” Telling. 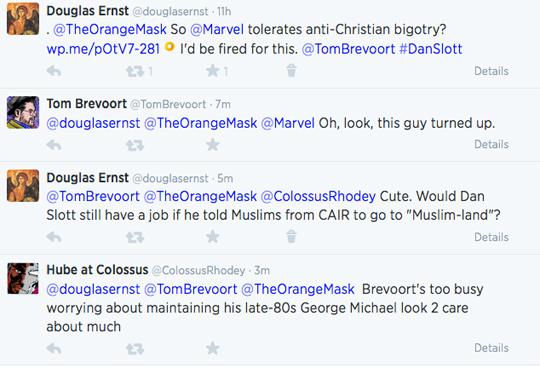 Someone else brought up similar sentiments about Marvel’s creators over at the New Brevoort Formspring. It turns out that Mr. Brevoort really does embrace the the strange business model “needlessly alienate potential customers” to grow the company.

The New York Comic Con is on, which means that comic fans get to view internet photo galleries of beautiful Cosplay ladies dressed as Power Girl, and Peter Parker fans get to read Dan Slott interviews where he inadvertently telegraphs to the world what he really thinks of the character.

Caps-lock abusing Dan teased things to come for Superior Spider-Man this weekend, and his state of mind couldn’t be clearer. ‘The Superior Freaky Friday Spider-Man’ takes on the Green Goblin in the months ahead, but before they clash Dan Slott wanted to set the record straight for posterity: He is the guy whose editorial judgment was so sound he decided to let a megalomaniac use Peter Parker as a “meat puppet.”

CBR: We know what the Green Goblin meant to Peter Parker, but what does he mean to Otto Octavius?

Dan Slott: I don’t want to give stuff away. You’ll have to wait and see, but one thing to keep in mind is Doc Ock killed Spider-Man, took his life, and carried on. So he’s had the ultimate victory over Spider-Man.

When you look at the rankings, I’m sorry but everything he’s done from the “Dying Wish” arc of “Amazing Spider-Man” on moves him up in the rankings. Norman Osborn is like, “Ha! I threw your girlfriend off a bridge.” And Dock Ock could reply, “You know what? I RIPPED HIS BRAIN OUT OF HIS SKULL, PUT MY MIND INSIDE, AND WORE HIM LIKE A MEAT PUPPET! TOP THAT!” [Laughs] So at some point you go, “You know, I think Doc Ock might just be the #1 Spider-Man villain of all time.” It’s like, “Suck it Goblin!”

Slow clap for Dan Slott. He is actually proud of allowing Peter Parker to be treated like a “meat puppet.” If you take to blogs, twitter and other comic forums to voice displeasure with his Peter Parker meat puppetry, he mocks you. Question for long time Peter Parker fans: Did you ever think things would reach this point?

How do you top that? In Dan Slott’s mind, one would assume that making Peter Parker into The Green Goblin might be an option. There are probably all sorts of dastardly things one could do to Aunt May that could “top” it, but do we really want to go there? Anti-heroes are still, on some level, supposed to be heroes, and if Dan Slott thinks Doc Ock can exist as one in Peter Parker’s body for such an extended period of time, what now constitutes a villain?

Read the full interview and you can’t help but notice that Mr. Slott seems to have concluded that if he can’t generate sales by uniting all Spider-Man fans (those who love Peter Parker and those who really just want to see someone in the costume swinging around the city with spider-powers), he’ll do so by creating events that a.) have far-reaching implications for the entire Marvel Universe, and b.) tormenting readers. People filled with anger and people filled with inspiration can be moved to action, but it is much easier to upset readers than to uplift them — hence, Superior Spider-Man.

Again, the question becomes: Where do you go from here? At some point in time Peter Parker will have to come back, and a poor writer will have to figure out a way to undo the damage. Dan Slott’s work on Spider-Man is reminiscent of the woman who tried to restore a 19th-century fresco of Jesus and turned it into an abomination. The finished product isn’t popular because it is beautiful, but because it is so incredibly weird and bizarre.

Dan Slott is the Celia Gimenez of the comic book industry, even if he doesn’t realize it yet.

If you are a fan of Peter Parker, I high suggest taking to social media platforms to let your voice be heard. There are few comic book characters that can be considered American cultural icons, but Peter Parker is one of them. When the history books are recorded, it should be a mark of shame upon the creative team that allowed him to be treated like a “meat puppet.”

Barack Obama apparently believes bankruptcy wormholes will save the nation. Here’s how it works:

WASHINGTON – President Barack Obama says he did a full court press for a health care system remake because “this country was going to go bankrupt.”

“You had others who said this is the end of freedom as we know it…so after I signed the bill I looked around…and I looked up at the sky to see if astroids were coming, I looked at the ground to see if cracks had opened up in the earth–and you know, it turned out it was a pretty nice day!”

Did you get that? The federal government had to take over 1/6 of the economy in order to prevent us from

going broke. Silly me, but I thought we already are broke. And since we’re going with the celestial terminology, one might want to consider the upcoming liabilities of established entitlement spending and how it dwarfs the stomach-churning spending of the Troubled Asset Relief Program (TARP).

It’s rather humorous that President Obama made light of the environment —the environment of that very moment—as he signed the bill. He’s very fond of living in the here and now:

“Do it for the people who are really scared right now…because of an accident or ailment they’re about to lose their house…do it for the American people; they’re the ones looking for action right now.”

“All I can do is try not to screw this up again…and just be friends.”

A Conservative can hope, can’t he?