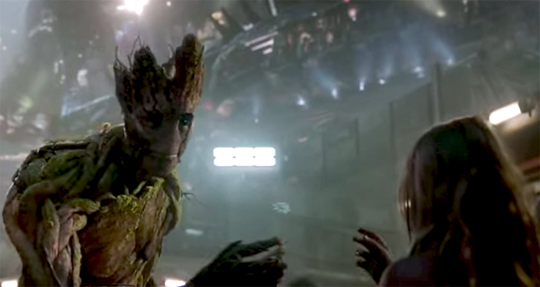 Before the weekend was out on the Guardians of the Galaxy’s successful box office debut, Marvel Studios released some news the size of an oak tree. Or, perhaps a Groot. The reasoning is also likely to enrage DC fans. Marvel’s Phase 3 will include ‘I am Groot,’ to be released in the summer of 2017, which all but guarantees that the plant from Planet X gets his day in the sun before “Justice League.”

“We are Groot!” Marvel Studios President of Production Kevin Feige said at a press conference late Saturday. “It’s a go. It’s happening. I know a lot of people are wondering how we’re going to pull this off, but I assure you that ‘I am Groot’ has an amazing creative team behind it. The screenplay is great and we’re close to sealing the deal with a director who I’m sure will knock it out of the ballpark.”

The Hollywood Reporter reached out to ‘Man of Steel’ producer Wesley Coller for a response and was told that a reply would be forthcoming. Entertainment Weekly likewise said that calls to DC’s front office were not returned.

DC’s silence, in many ways, speaks louder than words. ‘Batman v Superman: Dawn of Justice’ is scheduled to be released May 6, 2016, which would put Marvel Studios in a position to have ‘I am Groot’ in theaters before fans ever get a chance to see an official Justice League movie. While all comic fans can rejoice at the sheer volume of superhero films being made, it’s sure to inflame the rivalry between the two industry giants.

In a recent article with the Belfast Telegraph, actor Vin Diesel said that playing Groot was a challenge for him as an actor, due to the character’s limited vocabulary. When asked about the ‘I am Groot’ movie by the Los Angeles Times, he said “I love the character. He’s challenging, but it’s worth every second. The world fell in love with Groot this weekend because he’s innocent and pure and good. I consider it an honor to be able to bring this character to life in his very own movie.”

“I…I can not get behind this,” said Eileen Einhorn, a Gender Studies major at U.C. Berkeley. “It’s troublesome that although Vin Diesel is not white that his true nature must be hidden behind tree bark. I’m worried that Groot’s limited vocabulary sends a coded racial message about the mental acuity of minorities and, worst of all…Groot is a man. Until Black Widow gets her own movie I urge anyone who loves diversity to boycott ‘I am Groot.'”

When asked during his press conference if Rocket Raccoon would be getting his own movie, Feige just smiled and said, “Phase 4 may have some surprises to your liking. That’s all I’ll say right now. Sometimes I feel as if all of this isn’t real. Like it’s satire. The fans have been good to us. As long as they keep seeing Marvel movies, we’ll keep making them.”

Related: Guardians of the Galaxy: Marvel gets its heroic misfits right on the first try