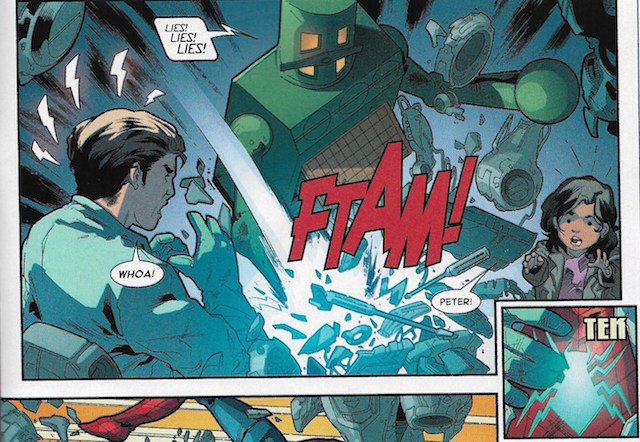 The Amazing Spider-Man #18 is an issue that has been building since the end of Spider-Verse in February 2015, so it stands to reason that writer Dan Slott would put extra care into the product. Still, it seems undeniable that this Doctor Octopus-centric tale possesses the most energy the creator has brought to the title in months. Fans of The Superior Spider-Man will be thrilled with the flashbacks and the loose ends that are tied up, while others will be left wondering, “Why can’t the book have this much life on a regular basis?”

Here is what you need to know about ASM #18:

Does that sound like a mouthful? If so, that’s because it is — there was a lot going on in ASM #18. To Mr. Slott’s credit, he organized his thoughts about as well as could be expected with the plot threads at hand.

As was said earlier, fans of SSM will enjoy this issue. There really isn’t too much to ding it on aside from the fact that once again people must act like morons to move the plot forward.

“Please, he won’t hurt me. He never would. Don’t ask me how I know. I just do. Trust me!” Anna says while trying to convince Peter to get closer to a rampaging Living Brain — but it might as well have been Dan Slott speaking to the readers.

Translation: “Don’t ask too many questions. I don’t. Trust me!”

And Dan is right: If you just want a “wacky” adventure and don’t have a desire to think too hard, then this issue is a fun read. Don’t ask why Anna and Peter give the equivalent of, “Huh. That was weird,” after Living Brain’s meltdown. Don’t ask questions about the nature of life and if humans have a soul, and don’t ask how Otto literally had Peter’s entire life beamed into his mind and didn’t change one bit.

Answer: No, because readers were given no reason to believe Otto had changed in the previous 29 issues. It just happened.

Regardless, as already mentioned, ASM #18 is worth buying for anyone who has been eager to see the series once again focus on Doctor Octopus. It is rather intriguing to think about a man who cannot have the woman he loves because he is trapped inside an “inferior” body, and the villain’s plans to resurrect himself are a good tie-in to Dead No More.

If you plan on buying Dead No More, then ASM #18 is worth picking up this weekend. If not, then you still might want to give it a read. The author seldom is capable of packing pathos, organized thought, enthusiasm, and action into a single issue of ASM, and it might be months before such a feat is witnessed again.