At some point in time fans of The Amazing Spider-Man have to wonder if writer Dan Slott has a thing against women. Every woman Peter Parker brings into his inner circle at his company seems intent on destroying the operation. A similar conversation can be had on Silk and her embarrassing sex-pheromones, but I digress.

The seventh issue of ASM moves the plot along as it is revealed Mr. Negative wants to take down “China’s favorite son, Shen Quinghao” by having Peter slip him the designer drug Shade. Luckily, the villain’s “corrupting touch” only works once, so he is unaware that when he previously took control of Spider-Man during Dark Reign: Mister Negative Miniseries, he lost his chance to do the same to Peter moving forward.

The real reveal of ASM #7, however, is that once again another woman is actively trying to sabotage Parker Industries.

Let’s look at the history:

The problem with the whole set-up is that Lien has barely made any appearances. Readers were told she and Peter were “close,” but yet none of it was shown in the actual book. No one cared about their relationship — or her character in general — and yet they’re supposed to be floored by her betrayal. The scene falls flat because Dan Slott never put in the work to credibly establish her character. It’s a repeat performance of Sanjani’s fall from grace. She couldn’t “fall” because she never had a pedestal to stand on to begin with. 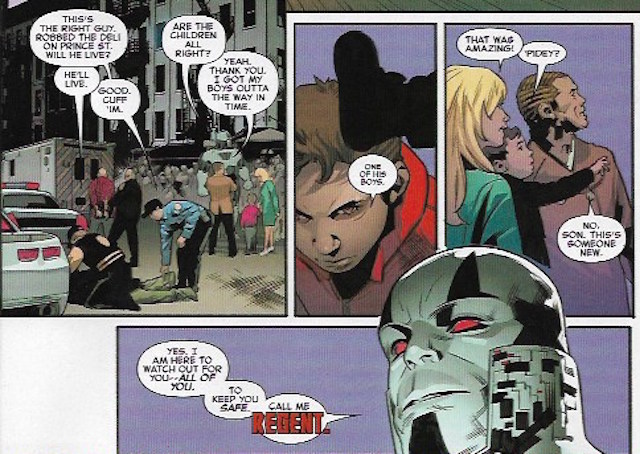 Two other scenes worth mentioning are the return of Regent — one of the few low points of Renew Your Vows — and Dan Slott’s continued insertion of the the perfect technology for any jam Peter finds himself in.

Last issue it was Quick-drying web-cement webbing and Acid-webbing. Now it’s “Micro Spider-Tracers.” Before that it was a Spider-plane that shot non-lethal web rounds, a Spider-submarine, and a handy-dandy Spider anti-toxin.

Question: At what point in time will fans be introduced to the Spider-Tank, and when will Peter introduce the Single Cell Spider-tracer?

If these are the ASM stories you’re looking for, then more power to you. However, one still can’t help but wonder: Where is all the feminist rage over the way Dan Slott writes female characters?