Joe Quesada, Chief Creative Officer of Marvel Entertainment, took to Tumblr on Friday night to bemoan the way comic industry “professionals” are treated by fans. He played the world’s smallest violin for people like Steve Wacker, Dan Slott, Mark Waid, Erik Larsen, Gail Simone and countless others who say incredibly nasty things via their social media accounts. When confronted about his silence on the despicable behavior of his buddies, he chose to play dumb.

“It has never ceased to amaze me how some people, in defense of their favorite fictional characters or stories, treat creators and each other, flesh and blood people living actual lives with actual feelings and families, with such disrespect and cruelty as though they were two-dimensional, fictional villains who merely exist on a page or the imagination.”

A fan then called him out on the laughable attempt to play the victim.

Joe Quesada’s response: What you talkin’ about Willis?

I don’t know what inexcusable behavior you’re referring to, but I known that they all love this medium and the fans as well. I see them at conventions and online, they’re giving of their time, funny, even cheeky at times, even when provoked in horrible ways. But, I’ve never known them to behave inexcusably.

Let’s take a trip down memory lane just for Joe, shall we?

There was that time Dan Slott stalked and upset a random woman on Twitter.

And then there was that time when Dan Slott told Hobby Lobby supporters to go to “Christ-Land.” 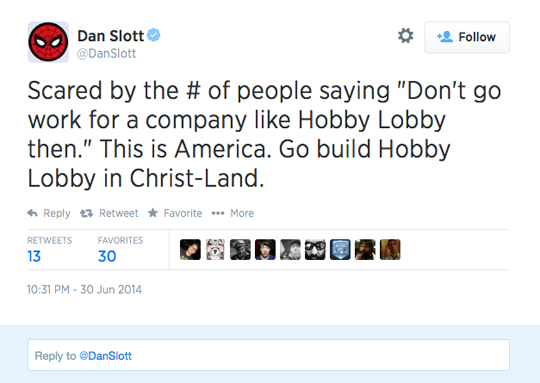 Note: I’m pretty sure that if a group of mostly Jewish individuals won a court case and I told them to go to “Jew-Land,” Dan Slott would find that rather repugnant. The same goes for a request to go to “Muslim-Land” to a group of Muslims. But hey, Mr. Quesada has “never known” Dan Slott to behave inexcusably.

Moving on, we have Erik Larsen last year letting all his Christian fans know just what he thinks of their faith by posting an Easter bunny ejecting bloody eggs out of its butt, which then hatched different versions of Jesus. But again, Mr. Quesada has “never” known comic book industry “professionals” to behave inexcusably. 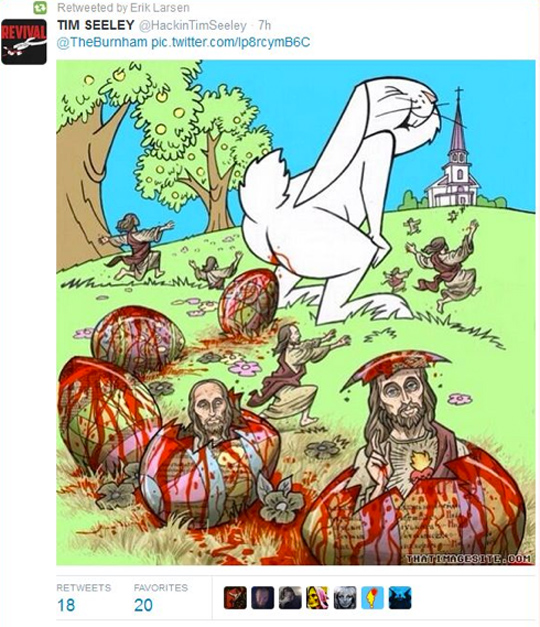 What about if you’re a conservative comic book fan? How do writers and artists comport themselves online, then? Since Mr. Quesada has “never” known creators to behave inexcusably, let’s see a snapshot of Mark Waid’s online behavior. Ah yes, he wants Republicans to go “f**k themselves.” How quaint.

Speaking of conservatives, how many conservatives work with Joe Quesada? I know he likes to talk about diversity, but I seem to have trouble finding one comic book writer employed at Marvel who is openly conservative. I guess ideological diversity doesn’t count.

I can go on and on, but since Mr. Quesada struggled to find comic book industry “professionals” acting inexcusably I’ll even add in an example from Gail Simone. Apparently it’s okay to start resorting to personal attacks against combat veterans if they disagree with Ms.Simone’s politics. 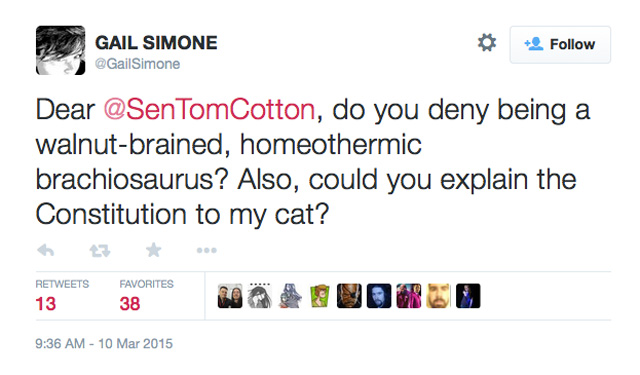 If I called Ms. Simone a “walnut-brained woolly mammoth” over a disagreement on politics or comics, I suppose Mr. Quesada would lecture me on how I need to treat her like “flesh and blood” with “actual feelings.” We all know that he won’t give that lecture to Ms. Simone, though — he agrees with her politics.

Here’s the bottom line: At Marvel, tolerance, tact and understanding are all part of a one-way street.

If you agree with them on politics or the creative direction of their books, then they’ll laugh and giggle and chortle along with you all day long. If you happen to think that young women who work the late shift at a hospital should be able to carry a handgun, then things start to change. If you think having Peter Parker make a deal with the devil goes against everything the character stands for, then it’s a different story. Steve Wacker and Dan Slott and Tom Brevoort and the whole Marvel crew can make smarmy, condescending cracks in your direction all day long, but if you’re a smart guy who has a few intellectual nuclear warheads in your back pocket, then suddenly you need to be concerned about “feelings” and “families.”

Joe Quesada is the guy who burns bridges and then berates fans for not making those bridges out of stronger material in the first place. Joe Quesada is the guy who eggs on his buddies to act like bullies, and then when fans give them a verbal beat-down he gives lectures on inflammatory rhetoric. The brown-nosing comic book and entertainment “journalists” who will do anything to cozy up to a few Marvel writers and artists may not call out inappropriate behavior, but bloggers will.

Keep playing dumb, Mr. Quesada. Keep going with the Arnold Jackson “What you talkin’ about Willis?” strategy. This isn’t 1990. The digital trail doesn’t go cold very quickly, and bloggers are always ready to chronicle your hypocrisy. If you want to know why you’re not treated with respect by countless fans — or why the comic book industry is a shadow of its former self — all you have to do is look in the mirror.