Brian Michael Bendis is one of Marvel’s key writers, but in a previous life he may have been a circus juggler. Spider-Man #8 somehow manages to move the title’s plot forward, set the stage for Champions, and seamlessly tie into Civil War II. Technically, Mr. Bendis hits all of his marks. Creatively, however, SM #8 once again shows why many older Marvel fans are fed up with the company.

Here is what you need to know for SM #8:

This sounds like a great issue, right? Well, sort of. One’s enjoyment or hatred of SM #8 really hinges on his or her opinions on Civil War II. Bendis — and artist Nico Leon — do an admirable job showing young heroes who struggle to find their place in an “adult” world, but at the same time it all comes at the expense of classic characters. 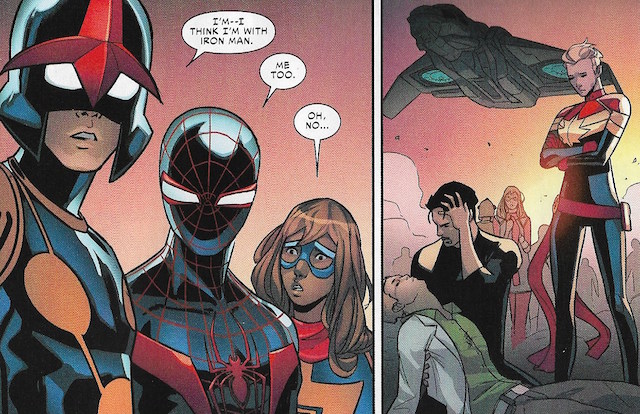 There is a scene after Banner’s death where the three kids come together to comfort one another that is incredibly poignant, but the feeling disappears the moment one realizes that Captain Marvel and every superhero who sides with her has taken on a goofy position to make Civil War II work.

In short, Mr. Bendis has nicely set up an “us against the world” dynamic for the future “Champions” that will also serve Spider-Man well, but in many ways he is doing so at the expense of icons like the original Spider-Man, Peter Parker.

If you are an older reader, the best way to show your displeasure is to withhold your wallet for any title that engages in character assassination of the heroes that made Marvel what it is today.