‘Totally Awesome Hulk’ totally makes sense; Axel Alonso should shut up so he doesn’t ruin it 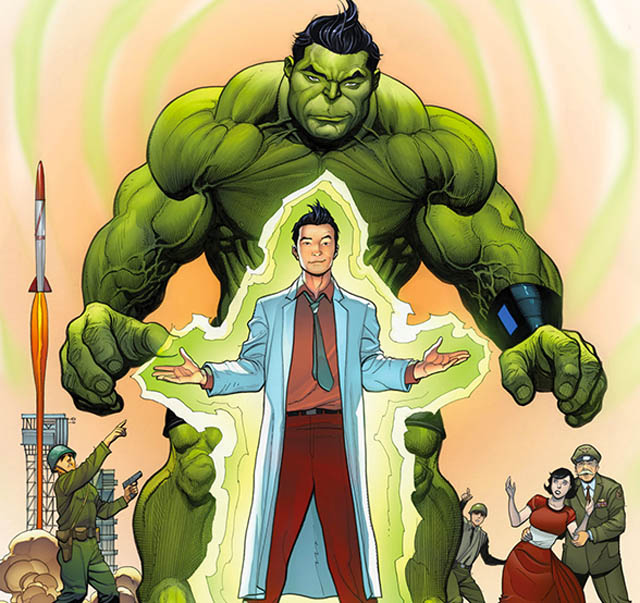 Marvel announced Friday that the world was going to get a new Hulk: Amadeus Cho. The move follows a whole host of odd decisions by the company — diversity for the sake of diversity’s sake — but this one actually makes sense. The only problem is that the guy who should be able to properly promote the story, Marvel editor-in-chief Axel Alonso, can’t help but stick his politically correct foot in his mouth.

Consider the difference in language between writer Greg Pak and editor Mr. Alonso in their Entertainment Weekly interview. First we have Mr. Pak, who serves as a fine ambassador for his upcoming project:

PAK: I actually co-created Amadeus back in the day, 10 years ago — it’s coming out around the 10th anniversary of the character’s first appearance. And Takeshi Miyazawa was the artist and I was the writer, and we introduced this Korean-American kid into the Marvel Universe. It’s been a blast to write ever since. We did a lot of stuff with him over the years in the Hulk universe. This is also a character, by the way, who has a long history with Banner and the Hulk. He basically started out as Hulk’s number one fan because he’s a crazy teenager with as little impulse control as the Hulk, so he kind of identified with him. But the character always meant a huge amount to me. When I had the opportunity to create this new character, I realized there aren’t specifically that many Asian-American characters at this time in the Marvel Universe, and it was sort of a niche. I also wanted to write a character who talks a lot. I was writing a lot of Hulk stuff, I was writing very closed-lip surly characters. But it’s been tremendous. I go to cons and people come up to me dressed as Amadeus Cho, and that blows my mind. And then the character’s also been picked up in some of the cartoons that Marvel puts out, and in one of the DVD movies they did. It’s kind of tremendous when anything you work on kind of resonates with people and goes on to be used by other creators as well.

The other thing is that this felt like a natural next step for both the Amadeus and the Hulk stories. It wasn’t what we imagined 10 years ago when we created the character, that this is exactly where he would end up. But just given the character’s history, it makes total sense. And the story is totally true for both the Hulk story and the Amadeus story, so it’s a lot of fun when those kinds of things can naturally come together for something this big.

Indeed, it does make total sense. At least it did until Axel Alonso weirdly had to emphasize that the character isn’t simply a Hulk, but the Hulk.

Readers can’t simply enjoy a story that makes sense — they must be beaten over the head with a message that Tumblr kids with low self-esteem want to hear. Marvel does not inch closer to Diversity Utopia unless the language used to discuss the new Hulk arbitrarily elevates him to a status at or above the classic white character.

Alonso: I also want to say that he will be the only Hulk in the Marvel Universe. He will be the Hulk, the green Hulk, that will be him. Just like there’s one Thor in the Marvel Universe and she’s a she, there is one Hulk and it is Amadeus Cho. But I also want to say that there is a story to be told for Banner. Banner’s story is not over. And I don’t want people saying, “Oh, these guys hate Banner, and they don’t like him and they’re sick of him.” No — we love Banner.

Mr. Alonso takes a rhetorical dump on Bruce Banner and the character’s fans to score points with the social justice crowd, and then he says “No — we love Banner.” It doesn’t work that way. He “loves” Bruce Banner like people say they love Dunkin’ Donuts coffee on Monday morning, which means that he merely has appreciative love.

Greg Pak should be given a pat on the back for the work he’s done at Marvel. Mr. Alonso, however, might want to consider locking himself in the closet any time someone asks him to comment on upcoming projects. There are many readers who want to give writers like Greg Pak a chance, but refrain because guys like Axel Alonso are in monomaniacal pursuit of political activists’ approval.

Exit question: If there was a Tumblr campaign started to create “The Totally Tubular She-Hulk” — and make her a lesbian black little person who liked to surf, what are the chances that Axel Alonso would take it seriously?