Issue No. 3 of The Amazing Spider-Man: Renew Your Vows is out, and fans get another dose of Peter Parker doing anything to protect his family. Writer Dan Slott’s “No one dies” philosophy for Mr. Parker has been replaced with “No one dies — unless you threaten my wife and kid,” which gives readers plenty to talk about. Just like issue number two, the writer does a decent job exploring the Parker family’s attempt to survive in an Orwellian nightmare. It’s a shame that its lame main villain, Regent, continues to drag down the quality of the tale. 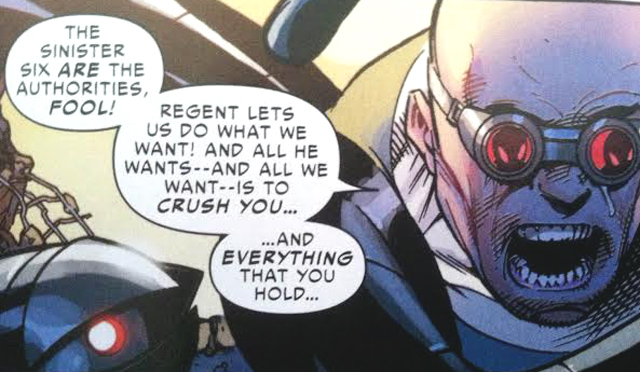 There is something incredibly satisfying about seeing a part of the enforcement arm (no pun intended) of a totalitarian police state getting ripped to shreds by a true hero. Unfortunately, the reaction by characters like Doctor Octopus to Spider-Man’s no-joking demeanor — only moments after telling the hero that he and his family would die a gruesome death — comes across as too comical.

If a man’s stock-in-trade is to hunt down and murder entire families, then he can’t be surprised when the head of the household — yes, even Spider-Man — counters deadly force with commensurate power. 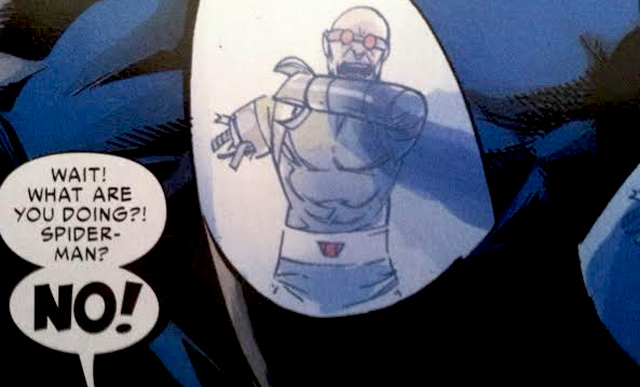 Would it be logical for Doctor Octopus to be taken aback by Spider-Man’s sudden willingness to use deadly force? In a world where state-run televisions turn off and on like something out of George Orwell’s “1984,” no. In a world where superheroes (and their children) are summarily hunted down and executed, no. In a world where Spider-Man lived after the entire Avengers team, Professor X, and The Hulk fell to Regent with seemingly little effort, no. Regardless, in this instance Dan Slott can be forgiven if his handling of Doc Ock’s response to “dark” Peter was a bit clumsy.

For those who didn’t get the message earlier in the book, Mr. Slott hammers it home in the final pages when Spider-Man webs an activated pumpkin bomb to Hobgoblin’s hand. “BWHOO” translated into writer-speak for this issue of Renew Your Vows is “If you mess with Peter Parker’s family, then there is a good chance that you will die.” 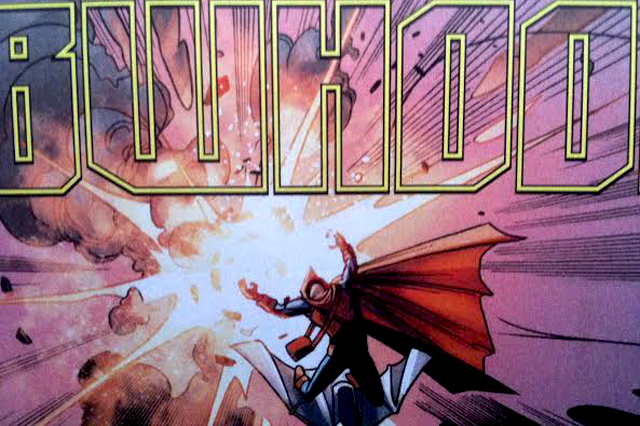 It is unfortunate that Regent is such a generic villain. Readers are left in a weird state of cognitive dissonance because on one hand the character is tied to a story that shows Peter and MJ at their best, but on the other he is a creative millstone around the neck of writer Dan Slott.

If Regent is another man’s creation that Mr. Slott has been forced to use, then I feel bad for him. If Regent is Dan Slott’s creation, then he shouldn’t complain when digital tomatoes are thrown his way for months to come.

In short, Renew Your Vows continues to be a story worth reading if you are a fan of Peter Parker. It has its flaws, but it’s better than 95 percent of what Dan Slott churned out for the entire relaunch of The Amazing Spider-Man in 2014.