Dan Slott trolls random woman on Twitter, then has the gall to bash GamerGate supporters

If comic book industry journalists did their job, then they would take Dan Slott to task for behaving like an immature clown on social media. The appropriate websites have abdicated their responsibility to discuss what it means to be a professional, so douglasernstblog.com will fill the void.

Those who follow The Amazing Spider-Man scribe probably remember the time he stalked The Main Event and got smacked down via YouTube. Readers of this blog will remember the time he tried to sic his Twitter followers on yours truly. Fans of Spider-Man Crawlspace and a host of other message boards undoubtedly have their own tales to tell. Now comes the time when Dan Slott tracked down and trolled a random woman on Twitter who said that The Superior Spider-Man sounded lame, and then afterwards he had the gall to bash GamerGate supporters.

I’m not sure when a man’s behavior qualifies him to be labeled a “douche canoe,” but it seems as though Dan Slott’s online impulse control problems can serve as a sound litmus test. 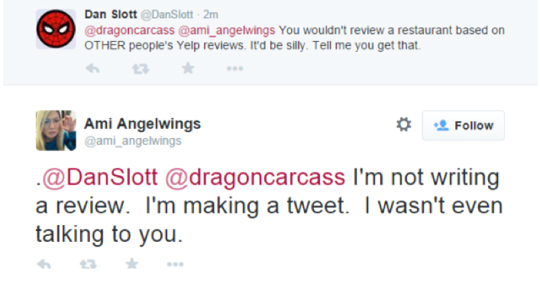 Ami Angelwings took the high road and simply pointed out how ridiculous and weird it is for the Marvel comic books writer of The Amazing Spider-Man to be manically searching through Twitter streams for criticism that he can use as an excuse to lash out at young women in front of his 65,000 + Twitter followers.

Slott, rightfully feeling shame, apologized. Then, without even picking up on the irony, he soon was bashing GamerGate supporters.

Despite the fact that GamerGate supporters are both men and women from a variety of different backgrounds, and despite the fact that many of them — including the Main Event — have very legitimate gripes about the gaming industry and the journalists who cover it, Dan Slott then goes on to slime all of them. Dan Slott — the man who just moments before found a random woman online and made jokes about the value of her life — said he will block people who merely defend guys like The Main Event. Telling. 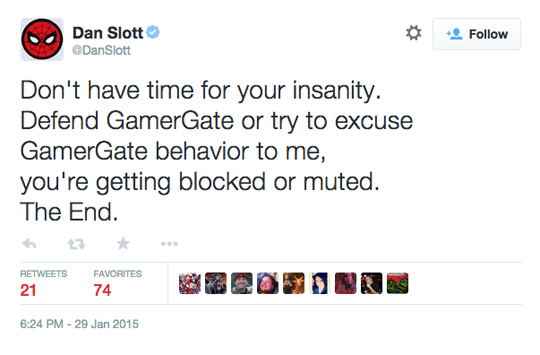 Luckily, guys like Raúl get it: “She didn’t even tag you. You actually searched for people to bully. How is that okay?”

It’s not okay, Raúl. You are 100 percent correct. The problem is that Dan Slott — the guy who complains about deadlines — is busy finding random women on the internet to spout off to because they didn’t like the premise of The Superior Spider-Man.

The next time you read The Amazing Spider-Man and ask, “Isn’t that sort of lazy for a writer to literally insert a deus ex machina into his big Spider-Man project,” you can now say “Yes” without skipping a beat.

The reason is simple: Thin-skinned writers who feel the need to sift through Twitter streams looking for women to troll are not very efficient with their time.

In the future, Dan Slott can go back to stalking random Twitter users and then mocking them in his own Twitter feed without identifying them by name. The thing is, he doesn’t even realize that such a bizarre way of fishing for compliments is just as sad.

Exit question: What are the chances that “Mister Mets” over at Comic Book Resources will ever take Dan Slott to task over his online behavior? And if you talk with Mister Mets, ask him what I’ve done on Twitter that comes remotely close to Dan Slott’s behavior. I’d really like to know. Please, go through my feed. All of it. Or not, because I don’t act like Dan Slott.

Notice that Cameron Samuri was banned? Why do I think it has more to do with him not adhering to Orwellian message boards rules than actually speaking out of line? 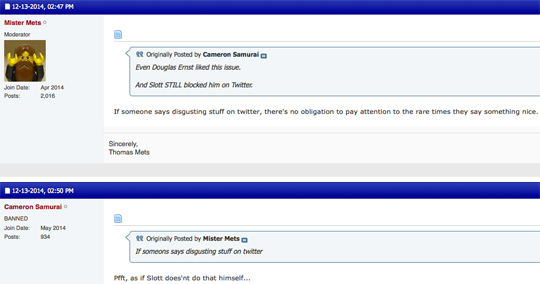