Superior Spider-Man #30 is finally here, and with it comes the guy we’ve all been waiting for: Zombie Peter Parker. Fans are supposed to rejoice now that Dan Slott’s “memory fragment” of Peter Parker has assumed the role of Spider-Man after Doctor Octopus decided to call it a day — conveniently as everything was crumbling around him.  With great power comes…ducking responsibility? Since the real Peter died in Amazing Spider-Man #700 and the downloaded Otto maybe-sorta-kinda just committed suicide, fans are left to wonder: Does Spider-Man have a soul or is he an empty husk whose able to say witty one-liners and think about Uncle Ben from time to time? I suppose it’s possible that the real Peter Parker was simply brainwashed the entire time, which would mean that Dan Slott made him do all those dastardly deeds over the course of SSM’s run, but that’s a whole other can of worms.

Regardless, for those who want to know how SSM #30 transpired, all you need to know is that Otto’s love interest, Anna Maria, is being held hostage and will die unless Spider-Man finds her. As all the evil Ock has done as Spider-Man has come back to haunt him, he realizes that only Peter Parker could save Anna, and thus he relinquishes the role of the hero back to Peter.

Fans of the book are supposed to sniffle just a wee bit as Otto disappears into a Dr. Manhattan-blue mind dust and gets wind-swept into the super unknown. This fails because people who aren’t suffering from anterograde amnesia remember that this is the same character who blew a guy’s face off at point blank range only months ago. 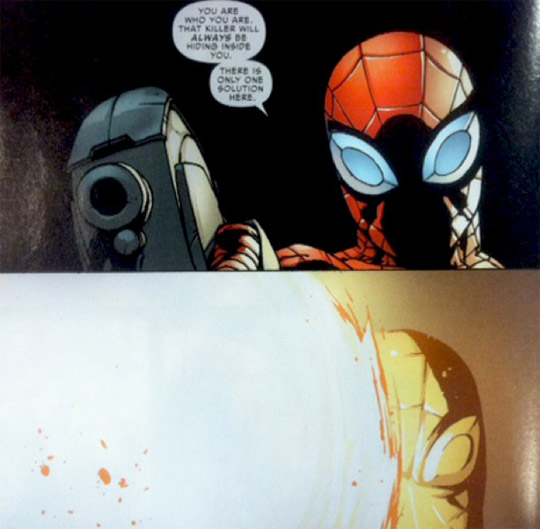 And it’s the guy who wanted to surpass “Pol Pot, Hitler and Genghis Khan” in terms of evil perpetrated upon the world — “combined!” just over a year ago. 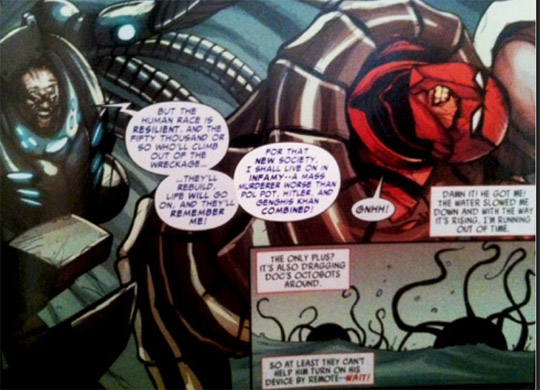 So the question becomes: Was it worth it? If you’re like Dan Slott and you only think in terms of sales, then yes.

If you’re like the retailer who went online to criticize the book because some things (i.e., the integrity of a character) are more important to you than a buck, then no.

Justin Bieber sells a lot of tickets, but the world knows he’s no Jack White. Dan Slott sells a lot of comics (by 2014 standards), but the world knows that sales are but one metric by which success is measured. As the years go by, critics will come to regard the Superior Spider-Man more as a bizarre embarrassment in the character’s rich history than a run to be treasured and adored.

To make matters worse, there’s also collateral damage to consider. Take how dumb The Avengers have become during the course of Superior Spider-Man. Their stupidity reaches a crescendo in issue number #30 as Iron Man and Captain America freak out about an “illegal medical facility” that Spider-Man turned a blind eye to. Blowing off a guy’s face as he’s on his hands and knees in front of you? Eh. Taking a page out of President Obama’s NSA spying scandal playbook and putting an entire city under surveillance? Zzzz. Amassing a militia of thugs and arming them with an arsenal that would cause Libyan Islamic terrorists to giggle like schoolgirls (if they allowed girls to attend school)? Yawn.

Didn’t go through the proper bureaucratic red tape necessary to open a medical center? Gasp! Dan Slott’s and Christos Gage’s Captain America wants to “arrest” that man. The Department of Health and Human Services is going to hear about this one, buster.

Should the world be happy that Peter Parker is back? Sure. But the problem is that we don’t know if he’s back because, as far as Dan Slott is concerned, a “memory fragment” without a soul is just as good as the real thing.

H/T to Colossus of Rhodey for the “sales” tweet.

And with that, I give you a preview of Jack White’s new album “Lazaretto.” Dan, since I know you’re reading this, I suggest listening to “High Ball Stepper” while imagining me doing the vocals two inches from your face. As long as you continue to write Spider-Man, I will continue to write high ball steppin’ reviews. Cheers.