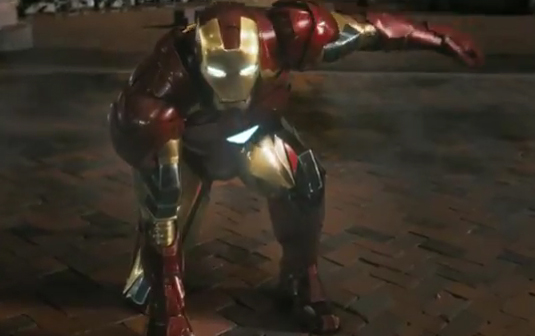 The word is out: Iron Man 3 is going to have more Tom Clancy and less Rock ’em Sock ’em Robots. Robert Downy Jr. is almost always amazing and so is the character of Iron Man (when he’s done right), so this is probably good news. The problem is, Marvel has a track record of sometimes allowing liberal claptrap to soak into its products. Sometimes, as with Summer 2011’s Captain America, they succeed despite their best efforts at self-sabotage. Due to this, let us revisit a Tom Clancy interview with Charlie Rose to get an accurate glimpse of who the man is and what he’s stands for:

Tom Clancy on Iraq: I think we won. Look, the real world is not digital, it’s analog. That means it’s fundamentally untidy. And so, the Iraq situation is going to remain untidy for quite some time to come. At the end of it Iraq is going to be a free democratic society, and that’s a win for us and for the whole world…. Democracy works. America has proven that to the world. Now some parts of the world are a little retarded on that, like China, North Korea and a few others. But democracy and the American model works better than any system in the world.

Tom Clancy on The French: [They’re] like a big sister. They think they know better than us, but we’re the one’s who made the money. They’re offended we don’t take their advice. Well, tough world. We’ve grown beyond that. … They eat McDonald’s, but they burn the places down. They ask Walt Disney to invest in their country, but then when it’s done they call it a cultural Chernobyl. … It’s a love/hate relationship. When the Germans are making noise, they love us.

Tom Clancy on terrorism: The first line of defense against any foe, particularly terrorists, is intelligence information, which means human intelligence, which means the operation starts with the CIA … that was hammered by Frank Church in the early 70’s and then the Jimmy Carter administration in the late 70’s. … Our ability to do [gain intelligence] was gutted almost 30 years ago … The CIA is an agency of about 17,000 people, of whom maybe 500 are field spooks. That’s a big tail on not a big dog. We threw away a lot of our human intelligence capabilities over 20 years ago, and although we’re just now starting to hire people and bring those people back it takes awhile to bring that capability back, it takes upwards of five years for these guys to be effective officers. Just because we’re funding it now, it’s not like flipping on a light switch. It takes time. Some terrorists organizations are actually family members, and it’s kind of hard to infiltrate a family. And the other thing that members of Congress have trouble with is, quite simply if you want to go down a rat hole you better have some whiskers, and they don’t want any good, upstanding Americans to have whiskers. …

The FBI had an agent named Joe Pistone who infiltrated the mafia. And he wrote a book about it titled Donny Brosco … and he got in so far that he almost became a made man, at which point there was a collective panic when the Director looked up and said, “How do we tell a federal district court judge that a sworn Special Agent in the FBI is now a made man in the mafia?” And that’s when they had to cut the information off, and we got a lot of useful information. That’s what the CIA does, but on an international basis…and it’s vital to get that information. The way you get that information might not be aesthetically pleasing, but the real world, contrary to what a lot of people on the political left think,  is not the Olympic skating championships.

Got that, Marvel? Tom Clancy is not liberal. He’s a very successful writer who doesn’t fill books with politically correct pap. If you’re going to allow Director Shane Black go on record with the Clancy-plan, then there’s no going back. However, since Black also directed Robert Downy Jr. in Kiss Kiss, Bang Bang (a severely underrated movie), I’ll give him the benefit of the doubt.

For all of us who can’t wait for Iron Man 3, at least The Avengers will tide us over.