It’s hard to believe that Zack Snyder’s ‘300’ came out seven years ago. It was 2007 when King Leonidas and his Spartans met their “beautiful deaths” on the big screen, although for this moviegoer it felt like yesterday. Love or hate ‘300,’ it’s a movie that was unlike anything else around at the time, and it inspired a slew of imitators.

Due to the some of the lackluster derivatives of ‘300’ that have come out over the years, audiences could be forgiven for walking into ‘Rise of an Empire’ with a healthy dose of skepticism. Regardless, after having seen the film I must say that I was pleasantly surprised. A friend of mine put it nicely: bring on ‘300: End of an Empire’ with the Battle of Plataea.

Sullivan Stapleton plays Themistokles, the kind of politician-warrior the world has long forgotten. (Can you imagine Harry Reid at the Battle of Salamis? Western Civilization would be doomed!) Themistokles has seen battle — watched men die because of the decisions he has made — and so does not take the decision to go to war lightly. Like King Leonidas, however, he understands the danger of attempting to negotiate with the world’s “wolves.”

“Negotiate with tyranny? Give me one example of when that has ever profited a nation? My fellow countrymen, we can only judge the future from what we’ve suffered in the past. Now many of you here stood with me at Marathon. And for those of you who served with me and suffered the cut and thrust of battle, you know how true peace is forged. Xerxes, the son of Darius, is a wolf at our door. Right here, right now we must choose — do we stand and fight for Greece or not? … We must persevere as one nation or we will perish clinging on to our own self interests.” — Themistokles

Stapleton’s Themistokles could never live up to Leonidas, but director Noam Murro wisely doesn’t ask him to try. He’s very comfortable in his own skin. No one can match the awesomeness of the Spartans, but they could be the best Athenians they could be. It was actually satisfying to see men who weren’t born and bred to be soldiers charge into battle in defense of higher ideals.

The flip side of the coin is Eva Green’s Artemisia who, quite frankly, might be one of the best movie villains of all time. She’s got strength and intelligence mixed with pure evil and sexuality. Green delivered a hell of a performance; when she was on screen you couldn’t take your eyes off her — even when she was kissing a man she just decapitated. 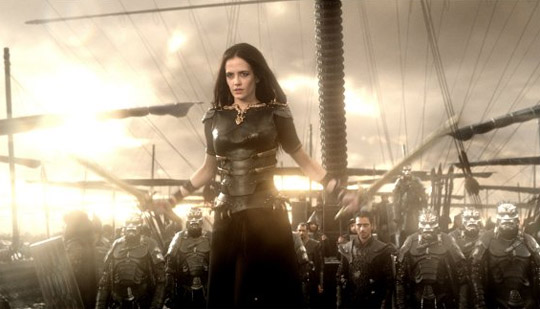 To understand how evil Artemisia was the audience just needs to have a sense of history. During ‘Rise of an Empire’ she meets with Themistokles and tells him that if he does not join her, then he will die simply because she has the numbers to overwhelm him. As it is with all dictators and despots, people are merely their pawns; the person with enough pieces to send to the slaughter “wins.”

Remember Ho Chi Min’s warning to the French? I do: “You can kill ten of my men for every one I kill of yours, but even at those odds, you will lose and I will win.” Human life means little to Communists in real life, and it meant little to Ms. Green’s Artemisia.

During the same scene she also promises Themistokles freedom “without consequences or responsibilities.” The Spartans and the Athenians knew that it is the fusion of freedom and liberty that is worth dying for, and not some definition of freedom that would require no concern for the man next to you. Strangely enough, when people talk about “freedom” today in America they are most often (sadly) using the term as Artemisia defines it.

Those who think “freedom” from consequences and responsibilities are what our founding fathers envisioned for the country have been mislead by individuals who are just as manipulative as Artemisia.

Finally, it would be a case of gross negligence to discuss ‘Rise of an Empire’ without talking about the blood spilled and the battles fought. Long story short, if you enjoyed the original ‘300’ then you will enjoy ‘Rise of an Empire.’ The movie is beautiful to watch, and director Noam Murro did a worthy job of displaying Themistokles’ strategic and tactical prowess. The movie messes with historical accuracy a bit, but then again it’s not vying for a prime time slot on History.

In short, if you miss Leonidas and the gang, then checkout Themistokles and his men. They’re not Spartans, but they’re pretty darn entertaining.

Editor’s note for regular readers: The book I’m working on references the Battle of Salamis, which was depicted in ‘Rise of an Empire.’ My characters need to get out of some dicey situations, and one in particular uses the strategies and tactics employed during some of the world’s most famous battles to do so. I’ll continue to keep you posted regarding the book’s progress.

Zack Snyder is teaming up with Frank Miller again. Need I say more? “Xerxes” will

see the light of day, and Holocaust denying mullah nut-jobs and the likes of Mahmoud Ahmadinejad aren’t happy about it (and that’s a good thing, my liberal moral relativist friends):

“‘300’ also became an international incident, of sorts. Iranian President Mahmoud Ahmadinejad bitterly denounced the film and the Iranian Academy of the Arts filed a formal complaint through the United Nations that framed the movie as nothing less than an attack on the historical identity of a nation…”

To a lesser extent, we can all sit back and enjoy as liberal media outlets and the hollowed out cultural carcass that is Europe freak out over Xerxes’ political undertones and the positive messages the kids might take away as it regards to Western Civilization. If you think really hard you might remember reading about our German friends’ reactions to 300:

LOS ANGELES, March 4 — Three weeks ago a handful of reporters at an international press junket here for the Warner Brothers movie “300,” about the battle of Thermopylae some 2,500 years ago, cornered the director Zack Snyder with an unanticipated question.

“Is George Bush Leonidas or Xerxes?” one of them asked.

The questioner, by Mr. Snyder’s recollection, insisted that Mr. Bush was Xerxes, the Persian emperor who led his force against Greek’s city states in 480 B.C., unleashing an army on a small country guarded by fanatical guerilla fighters so he could finish a job his father had left undone. More likely, another reporter chimed in, Mr. Bush was Leonidas, the Spartan king who would defend freedom at any cost…

Some attendees walked out of a screening there, while others insisted on seeing its presentation of the Spartans’ defense of Western civilization in the face of a Persian horde as propaganda for America’s position vis-à-vis Iraq and Iran…

“Don’t you think it’s interesting that your movie was funded at this point?” Mr. Snyder recalled being asked in Berlin. “The implication was that funding came from the U.S. government.”

When you read the negative reviews of Xerxes, you might ask yourself if it’s because Frank Miller is one of those rare breeds in Hollywood—the openly patriotic artist:

“…Then came that sunny September morning when airplanes crashed into towers a very few miles from my home and thousands of my neighbors were ruthlessly incinerated — reduced to ash. Now, I draw and write comic books. One thing my job involves is making up bad guys. Imagining human villainy in all its forms. Now the real thing had shown up. The real thing murdered my neighbors. In my city. In my country. Breathing in that awful, chalky crap that filled up the lungs of every New Yorker, then coughing it right out, not knowing what I was coughing up.

For the first time in my life, I know how it feels to face an existential menace. They want us to die. All of a sudden I realize what my parents were talking about all those years.

Patriotism, I now believe, isn’t some sentimental, old conceit. It’s self-preservation. I believe patriotism is central to a nation’s survival. Ben Franklin said it: If we don’t all hang together, we all hang separately. Just like you have to fight to protect your friends and family, and you count on them to watch your own back.

So you’ve got to do what you can to help your country survive. That’s if you think your country is worth a damn. Warts and all.

Frank Miller isn’t perfect. If you haven’t seen The Spirit, consider yourself lucky. However, Frank does know how to join forces with some pretty creative guys, each with a track record of directing a cool movie or two.

See you on opening night, Mahmoud! I’d invite you to see Tron, but I heard Islamic police states have an aversion to Imax 3D versions of Jeff Bridges. Your loss.