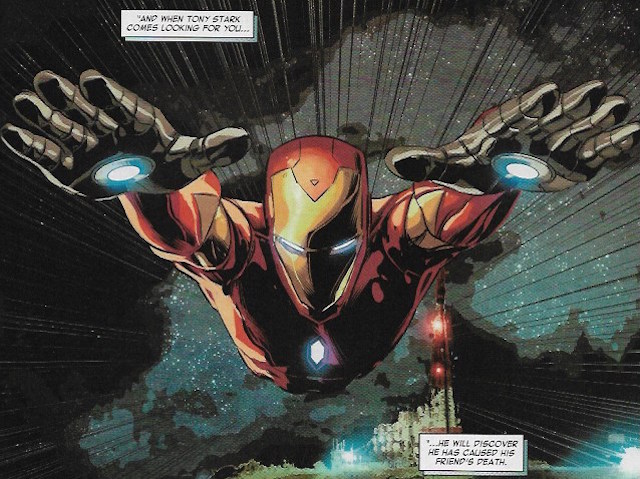 The issue of Invincible Iron Man that Mary Jane fans have been waiting for has arrived. The seventh issue on Bendis’ run features MJ’s first day at work for Tony Stark, and before it’s over she needs to reach Peter Parker at his emergency number. It may be the character who is introduced on the final page of the book, however, who Stark fans should be talking about.

IIM #7 dedicates almost the entire issue to Tony’s first professional interactions with his new hire. They talk…and talk…and talk, but in this case it’s okay because standards are set, boundaries are established, and chemistry needs to form.

Readers simply need to imagine what a similar introduction between Peter Parker and Pepper Potts would look like in The Amazing Spider-Man. Instead of devoting 95 percent of the issue to authentic human interactions, Pepper would get a cursory introduction and then a calamity would strike. The audience would weirdly be expected to care for the new relationship simply because it’s Pepper and Peter working together — and then Comic Book Resources would give it the obligatory glowing review. 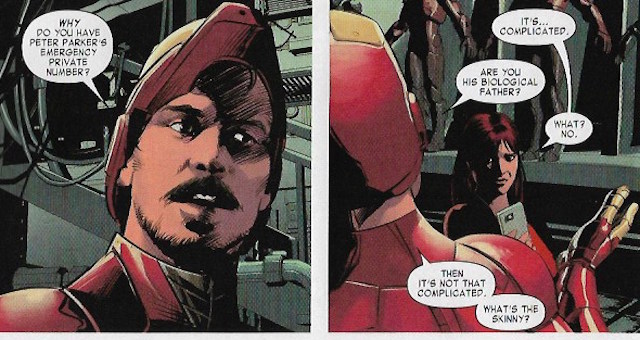 Perhaps one of the few awkward things about Stark’s decision to hire MJ is his cluelessness about her past. He invites a woman into his inner circle but does not really vet her. Only issues before he was telling his girlfriend about telepathic espionage, etc., and now he impulsively hires a former club owner. Regardless, Bendis’ scenario as it is written passes the smell test (barely). 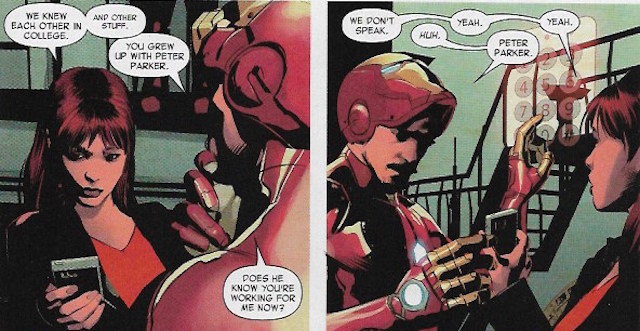 Aside from MJ’s meeting with her new boss, the rest of the issue is dedicated to Rhodey, who was sent to Japan to investigate a group of bio-hacker ninjas until Stark can get around to it. Rhodey goes missing, and through a strange twist of fate it turns out that technology titan Peter Parker is in country.

“You know your bodyguard, Spider-Man? Is he doing anything right now? Listen, I need a favor. It’s kind of a big one,” Stark says after getting Parker on the phone, which nicely sets up IIM #8.

One would think the issue would end with Iron Man racing to save his friend, right? Wrong. Bendis cuts to Massachusetts Institute of Technology, where a young woman appears to be making her own “Iron Man” suit in one of its labs. She is scolded by some older staffers who call her a “kid” in the final panel.

Who is this kid genius? Why is she making “Iron Man”-type armor? (And yes, I realize I am asking these questions when “to be continued…” obviously means that we will get answers in due time.)

The previous questions need to be asked because Marvel has made no secret of its desire to social justice the heck out of its own universe. It seems entirely plausible that Bendis could be setting the stage for Tony to be “killed” or temporarily replaced, just like Captain America, Thor or even Spider-Man (e.g., Bendis’ Miles Morales wants to be seen as “the” Spider-Man”).

If you have thoughts on IIM #7, feel free to share them below. I’d love to hear what you thought of MJ’s first day on the job, Bendis’ mystery character, or predictions for the next issue. 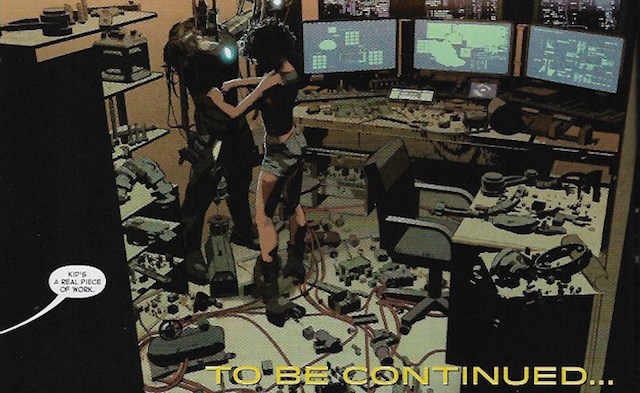