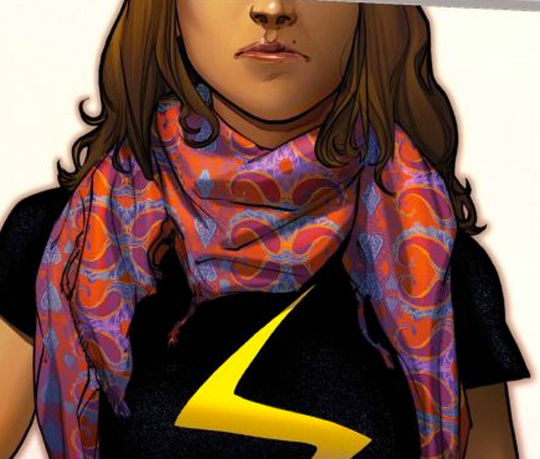 The trade paperback for ‘Ms. Marvel Vol. 1: No Normal’ is out, and on the cover a Comics Alliance pitch reads “This may be the most important comic published in 2014.” But is that true? It all depends on how you define “important.”

Consider the ways you could misstep in updating a classic comic-book superhero. Now imagine that your protagonist is A) female, B) 16, C) a Pakistani-American and, oh yeah, D) Muslim.

Could there be a tougher assignment? […] How can the timeworn superhero format possibly express the complexity of a modern teenage girl’s experience — all without objectifying her bod?

You can put it in the hands of G. Willow Wilson and Adrian Alphona, that’s how. Faced with one of the trickiest problems a creator could imagine — rebooting Marvel Comics’ decades-old heroine Ms. Marvel — Wilson and Alphona rise to it and burst through. …

Wilson and Alphona have written a comic for people who appreciate superheroes as icons, but don’t necessarily feel an ongoing emotional investment in their battles with the forces of evil. As such, the authors risk alienating the traditional fan base to zero in on a narrower demographic. Is it inevitable that an innovative female hero will have to draw her fans from this razor-thin cohort? To find out, stay tuned for our next installment.

Can a superhero comic book really be important if it’s marketed for a “razor-thin cohort” that doesn’t really possess an “emotional investment” in the battle between good and evil? Magic 8 Ball says, “not likely.”

Kamala Khan is actually a very interesting character, and writer G. Willow Wilson does a superb job conveying the trials and tribulations of a first-generation American teenager. Even her shape-shifting ability fits in nicely with the psychological tug-of-war that many teenagers go through, putting on a specific face for their friends and another for family. It is also incredibly moving to witness Kamala’s search for identity after she subconsciously uses her new powers to turn into Captain Marvel — a white woman — instead of Kamala Khan in a Captain Marvel costume.

Likewise, the complexity of Kamala’s family life is well written; her mother, her father, and her brother are all characters that readers will want to know more about. When a family risks everything to come to America to give their children a better life — and then those children frustrate or confuse them — how does that play out behind closed doors? What kind of conversations go on? Ms. Wilson deftly provides answers. 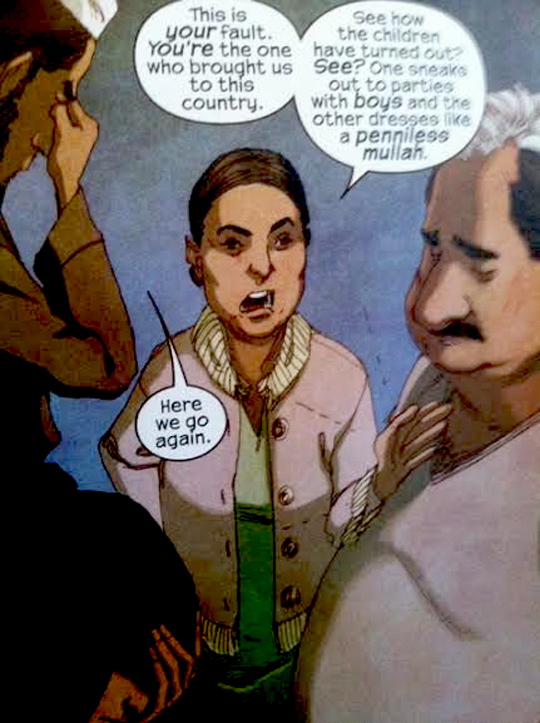 Unfortunately, outside the intimate portrait of what it’s like to grow up as an immigrant in the United States, it’s hard to get excited for the book — especially for readers with limited disposable income — because so little energy is invested in “battles with the forces of evil.” That may change as the series develops, but readers without much cash to spare aren’t interested in third-rate villains from Jersey City — they care about bad guys who threaten to take down New York City. Oddly enough, Dan Slott does a good job highlighting the character’s potential in her team-up with everyone’s favorite wall crawler in issues 7 and 8 of The Amazing Spider-Man. (Perhaps Dan Slott should just stick to writing light and fun Marvel Team-up fare since more substantive stories give him a hard time?)

The title’s other weakness is its lack of nuance when it comes to addressing those with legitimate questions about Islam — even labeling such characters “concern trolls.” Lily-white mean-girl “Zoe” and lily-white meat-head “Josh” generally represent ignorance, intolerance and racism.

They can’t go to the predominantly black area of Jersey City without hand sanitizers. 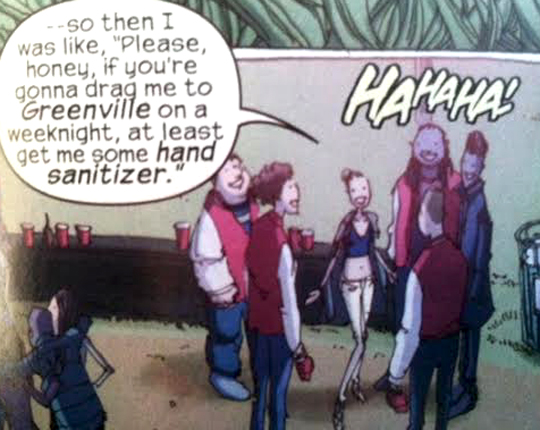 Zoe is a vapid party girl who says Kamala smells “like curry,” and Josh (who bumbles around with a giant bobble-head), thinks it’s hilarious to trick a Muslim girl into drinking vodka. 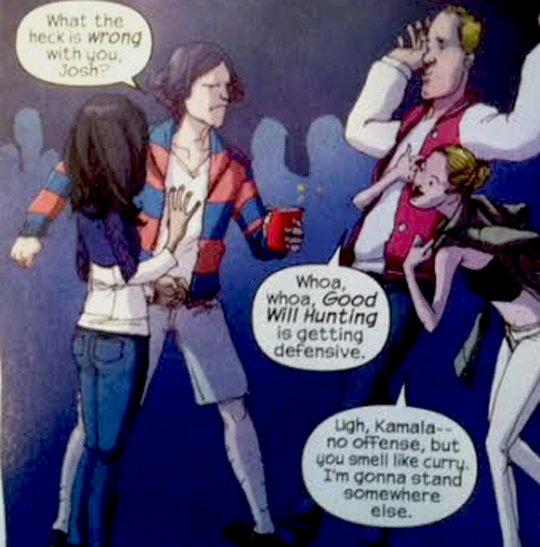 The two characters are portrayed as jerks for wondering whether adherence to Islam forces Ms. Khan to do things she’s not happy with, and then a few panels later readers see her openly resentful of the fact that women must sit below men and out of sight during prayers at the local mosque. She even sneaks out a back door, saying, “it’s not like they’re going to notice we’re gone.”

Ms. Marvel has the potential to be a great book. It also has the potential to be “important,” as Comics Alliance would say. However, at this time it seems a lot like Kamala, trying to find an identity within the Marvel universe. Right now, it’s a well-written book for a niche audience. If it aims for something more, then it’s going to have to make changes. If writer G. Willow Wilson is happy with where it’s at, then that’s fine too — but outlets like Comics Alliance should refrain from overselling the book.

Related: Marvel: We killed Peter Parker and ruined Tony Stark, but who cares — you now have Muslim Ms. Marvel