Hollywood on ‘Son of God’ and ‘The Passion of the Christ’: If it has Jesus, we’ll find an excuse to hate it

‘Son of God’ came out in theaters this past weekend, and you’ll be shocked (not really) to find out that critics hated it while most audiences walked away happy. The movie raked in well over $26 million dollars, coming in second to Liam Neeson’s ‘Non-stop,’ where the bad guy is a veteran who loves the Constitution. I saw ‘Son of God’ this weekend and am baffled (not really) how it could have possibly scored a “26% rotten” on Rotten Tomatoes. While it’s obvious that the movie was made by believers for believers (and those who may want to dip their toes into the pool of Christianity), it’s certainly not a “bad” film.

Perhaps critics were simply harsh because they feel it belongs on television instead of the big screen. That seems plausible. Given that, I decided to revisit another movie about Jesus, Mel Gibson’s ‘The Passion of the Christ.’ It turns out the critics didn’t like that one too much either.

Here is what I found: Rotten Tomatoes doled out a 49% “rotten” score for ‘The Passion of the Christ,’ while audiences overwhelmingly liked what they saw. Maybe if it made an extra $100 million over its already-impressive global haul it would have matched Rotten Tomatoes’ score for Neeson’s evil constitution-loving veterans flick…

‘The Passion of the Christ’ was a “film” by a “filmmaker.” Whether you like Mel Gibson as a person or not, the guy has talent. Audiences recognized it as well, and rewarded ‘The Passion of the Christ’ to the tune of $370 million at the box office in 2004. If I take my “Catholic hat” off and look at both movies from the point of view of someone who doesn’t particularly care for Christians, ‘Son of God’ would get the 49% “rotten” score and ‘Passion of the Christ’ would get a 65% “fresh” rating — but I’d shake my fist at Mel as I did it. There is really no way to read some of the critic’s reviews without coming to the conclusion that they simply don’t want Jesus on the big screen. 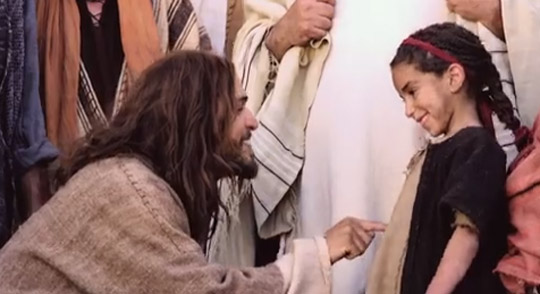 Probably one of the best reviews I’ve seen on the movie comes from YouTube critic Jeremy Jahns:

I was really skeptical about this movie. Going into it I was like: “All right, it’s part of a mini-series. It’s going to feel like it’s made for TV.” And it does for the most part, but there there were a couple of things about this movie that I did like what they did with it. Going into this movie first and foremost I was hoping they would touch on the fact as to why people felt this Jesus had to die. Seriously, a lot of these Jesus movies gloss over that. They’re like “Hey it was Jesus and he died because he had to, it’s salvation and stuff. It’s magic.”

But I’m always left with that feeling, “No, like politically speaking why did they feel they had to kill this guy and why was it just such a big deal and what went into it? And this movie — actually to my surprise — touched on that very thing. …

This movie is one of two things: it’s either a really impressive made-for-TV movie or it’s a not-as-impressive theatrically released movie. … ‘Son of God’ engaged me where I wanted to be engaged. And it played the angle I was actually hoping it would play that I didn’t think it would play. It still feels like a made-for-TV movie for sure, especially in some scenes. However, I’ll still say ‘Son of God’ is a good time…”

There’s more to it, but you get the point. It’s a fair review. Head on over to Rotten Tomatoes if you want to see a slew of people who seemed to be looking for things to criticize from the first moment Diogo Morgado — who did a commendable job as Jesus — appeared on screen.

The other thing that ‘Son of God’ did a good job with was showing the relationship Jesus had with his disciples. Think about it: Peter, the “rock” of the Church, denied Christ three times. Matthew was a tax collector. Judas betrayed him for 30 pieces of silver. Jesus called imperfect people to Him. He took in misfits. He loved the unloved and forgave those who society said were unforgivable. While ‘Son of God’ does skip a lot of important parts of the Bible, those it did show were handled with care. It’s a solid movie to watch if there is someone in your life who has ever essentially asked, “What’s the big deal with this guy? Tell me about Him.”

With that said, for those who already believe in Christ I’d have to go with Gibson’s ‘The Passion of the Christ’ as a must-see Jesus film. If you watched ten movies with Jesus in them and someone asked “Which one was directed by a Catholic?” there would be no question (which to this Irish-Catholic is a good thing).

While ‘Son of God’ says, “Hey, there’s this guy and his name was Jesus and you should look into him,” Gibson’s ‘The Passion of the Christ’ says: “Listen buddy, this guy went through some serious s**t — grueling gut-wrenching pain that you can not even fathom as you curl into bed at night with your XBox in 2014 — so check it out and appreciate what this man did for you.”

When I read reviews by critics who obviously have a thing against religious people I can’t help but think of the Romans laughing, kicking, spitting and punching Christ as he carried his own cross to the place of his execution. Whether one believes Jesus was the Son of God or not, no serious person argues that He wasn’t a real man who was put to a gruesome death for what He preached. That is why guys like Jeremy Jahns ask: “Why was it just such a big deal [to kill Him] and what went into it?” Most people do not know the story aside from the watered-down version they might get as a kid, or (sadly) the jokes that are told about Christ on television sitcoms.

In short, if you’re curious about Christianity, then check out ‘Son of God.’ If you want to get a taste of the very real pain Jesus went through before his death, check out Mel Gibson’s ‘Passion of the Christ.’ In both cases, if you go into each movie with an open mind, then you’ll walk away and realize that the critics at Rotten Tomatoes hold openly Christian films to an unfair standard.