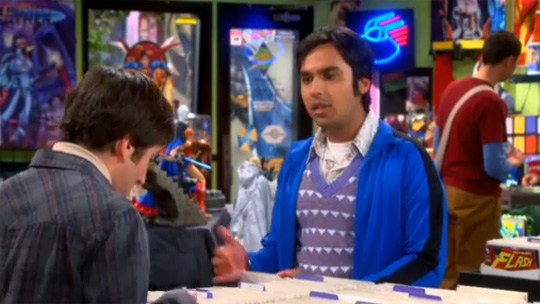 Do the writers of The Big Bang Theory read this blog? If not, it appears as though we’re on the exact same wavelength when it comes to Dan Slott’s Superior Spider-Man.

Here is what I said on February 1st after Dan Slott stalked “The Main Event” and got intellectually body slammed:

“It was only a few weeks ago that Dan Slott thought long-time Spider-Man fans would be okay reading a rip-off of 2003′s “Freaky Friday” starring Jamie Lee Curtis and Lindsay Lohan — only with Spider-Man and Doctor Octopus. (Or was that 1988′s “Vice Versa” starring Judge Reinhold and Fred Savage?)“

Now, take the most recent episode of The Big Bang Theory:

Howard: What were they thinking putting Doctor Octopus’ mind in Peter Parker’s body?

Raj: I’ve been quite enjoying that. It combines all the superhero fun of Spider-Man with all the body-switching shenanigans of ‘Freaky Friday.’

Let me spell it out for Mr. Slott and everyone else who keeps saying “Raj likes the Superior Spider-Man”: The reality is that the writers just made a joke that cut deep — at Dan Slott’s expense.

Howard asks “What were they thinking?” and the response — accentuated by the laugh track — was that Marvel killed off Peter Parker for what is essentially a rehashed version of Freaky Friday. Congratulations. Freaky Friday grossed $110 million dollars, so using the ‘Slott Rule’ for success, we only have to wait a few more decades before people realize the genius of Lindsay Lohan’s portrayal of Anna Coleman.

As I’ve said before, I believe there is room in the Marvel Universe for Doctor Octopus to play the “Superior Freaky Friday Spider-Man.” I am not opposed to having a megalomaniac running around New York with spider-powers. I just think that executing Peter Parker (twice) so that Dan Slott could make Jamie Lee Octavius everyone’s favorite wall crawler was an error of monumental proportions.

Ask yourself this question, Spider-Man fans: Knowing what you know about how Dan Slott conducts himself on message boards, how would he respond if someone said that they hated Superior Spider-Man because it was little more than ‘Freaky Friday’ with Marvel characters? Now ask yourself why he took to Twitter to feign admiration for a joke told at his expense. Perhaps because it’s a little more dangerous to mock and ridicule the writers of The Big Bang Theory than it is to personally attack the average fan? Hmmm.

Thank you, writers of The Big Bang Theory, for delivering a KNOCK OUT blow to this abomination.

Update: Someone over at ComicVine shared my blog post. Dan Slott has decided that personal attacks and weird discussions on Trayvon Martain and Ben Shapiro would be appropriate instead of actually discussing Superior Spider-Man.

“Douglas Ernst was clearly in the wrong– and horribly offensive– in the WORST way a human being could possibly be. He has NEVER apologized for that BASELESS, DISGUSTING, and REPREHENSIBLE attack. He has stuck to his guns that he was in the right for doing this TERRIBLE and ATROCIOUS thing. Douglas Ernst is a bad person. Plain and simple. Why you people give him the time of day here I’ll never know,” (Dan Slott).

It’s good to know “All-Caps” Dan Slott dislikes me so much that he … reads my commentary on legal cases like the Trayvon Martin case.

Speaking of legal issues, Dan Slott is now making weirdly veiled legal threats in my direction. Dan Slott stifles debate? Who would ever get that idea?

“If someone, like you, who is in the habit of spreading gross falsehoods about me online, I am interested to see if any of them rise to the level of being liable and actionable,” (Dan Slott).

Side note: Here’s Slott’s tweet after (one would assume, given the timing) reading this post. All press is good press, right? Even if writers are mocking your product, who cares if the attention will bring in more sales. Sad.