The real story behind ‘The Hawkeye Initiative’: Liberals bashing liberals 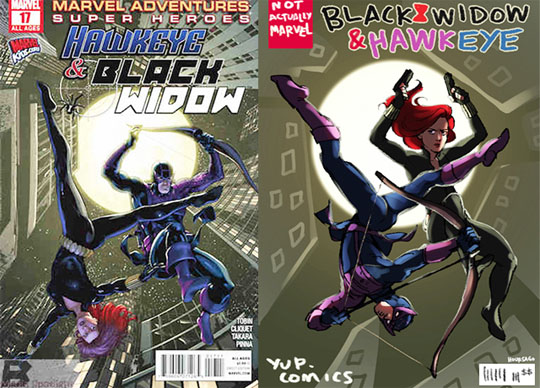 Not familiar with The Hawkeye Initiative? You should be, especially if you’re into comics. It’s a somewhat-amusing attempt by artists to replace “strong female character poses” with Hawkeye.

We’ve seen a lot of clever responses to the spine-twisting, butt-baring poses so many female comic book characters are subjected to, but the Hawkeye Initiative is particularly fun. Their mission: to take those particularly awful poses and replace the female characters with Hawkeye.

Why Hawkeye? It seems it all began when artist Blue decided to switch the poses and positions of Hawkeye and the Black Widow on one of their comic book covers. …

Then Blue and Noelle Stevenson (also known as Gingerhaze and creator of the fabulous webcomic Nimona threw a challenge out to Tumblr: fix those “Strong Female Character” poses by replacing them with Hawkeye doing the same thing.

The problem with I09’s Lauren Davis’ take on The Hawkeye Initiative is that it misses the story behind the story. Who are all these artists and writers and editors in the comic industry? What kind of sexist jerks would try and hide their objectification of women behind false attempts to portray a “strong female character”? Given that there’s a “war on women,” any rational human being would conclude that the perps are all very white, very Republican men. Right? Wrong.

Is it possible that some of the allegedly-sexist poses these women are put in are in fact rather innocuous — but that critics are merely projecting their own sexual biases onto the images? I think so. Scrolling through the Tumblr account, anyone who has read Spider-Man knows that as a quick and agile  character, many of his contortions would be interpreted as “sexist” if a woman was drawn the same way. Women have different bodies than men, an inconvenient truth that the gender police don’t want to acknowledge. 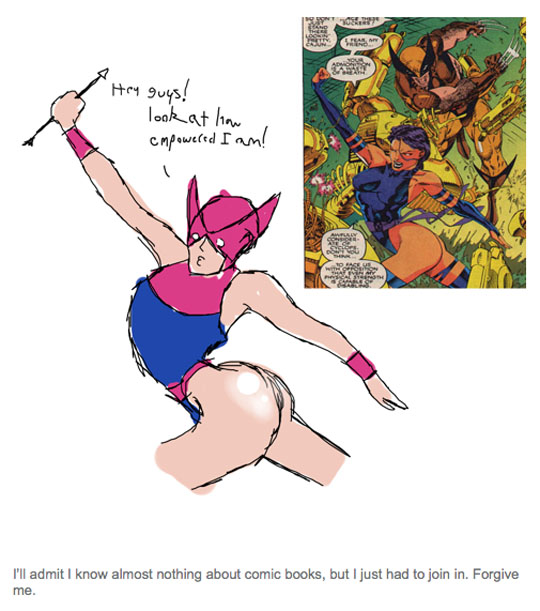 One of the biggest tells of The Hawkeye Initiative is that it doesn’t even require submissions to be from people who are actually fans of the work they’re criticizing. What if the image in question includes the Marvel equivalent of Ke$ha? What then? I guess it doesn’t matter, since all that counts to the self-righteous know-it-all are her intentions. “My statement about female empowerment matters more than my practical knowledge of the characters, their histories and their motivations.”

It may also be a shock to The Hawkeye Initiative crowd, but women are able to possess power, intelligence and sexuality at the same time. While even I get annoyed at the artist who is obviously obsessed with the porn-star-with-disturbingly-large-breast-implants look, I also don’t mind seeing  a female character whose strength and amazing figure are highlighted. (Apparently, the creators of The Hawkeye Initiative have never been to a bodybuilding competition, where men and women contort themselves in interesting ways to show off as many of their best assets in one pose to audience members and the judges.)

Regardless, the next time your friend talks to you about the “war on women,” go to your stash of comics created by liberal writers and artists. Show them a good butt-shot, and then ask them if they’d still buy the product if it was a known Republican who was devising such demeaning poses.

Update: If you’re coming here from Reddit, just a heads up: I’d comment in the thread, but my first tactful rebuttal was deleted because that’s how liberal Reddit goon moderators roll. We can’t have the conservative guy actually defending himself, can we?