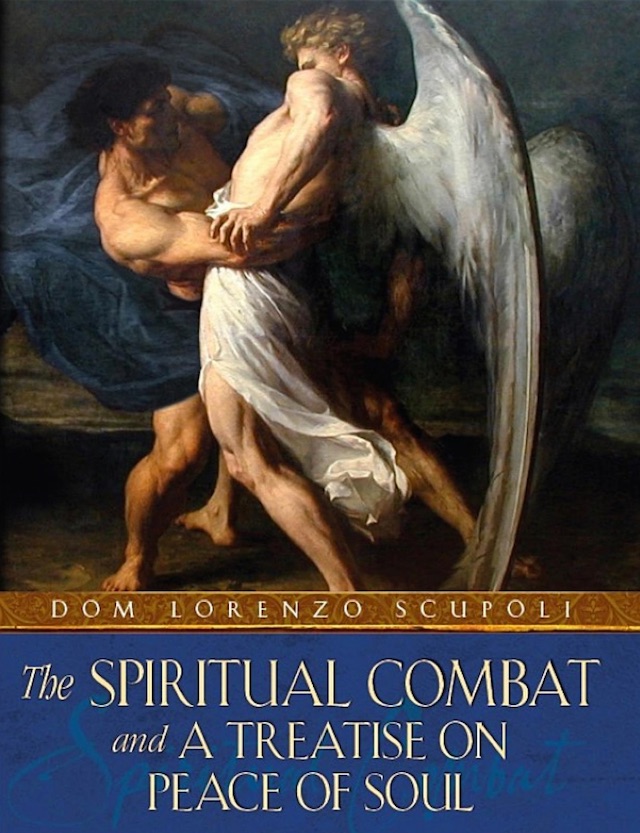 It has always been my belief that the vast majority of men, if not all men, have seriously wondered at some point how they would fare on the field of battle. War, for all of its wretchedness, offers men a clear picture of their inner virtue — or lack thereof. These “What if?” games are unnecessary, however, as Dom L. Scupoli Apulia’s The Spiritual Combat and a Treatise on Peace of Soul demonstrates.

The Italian author pointed out in 1589 what many men in 2016 fail to realize — bombs are already dropping all around us. Spiritual warfare rages in all directions. A man not only can be a war hero, but he must — his very soul depends upon it.

What men often fail to realize is that they are stuck in a no-man’s land reminiscent of World War I. This is a bad place to be. Man’s rational faculty is called from both sides in the only war that matters: “God moving it by His grace, and the flesh by its appetites.”

Being “neutral” in this war is not an option, and since tomorrow is never guaranteed it is best to pick a side now.

Fully mastering patience, humility, obedience and numerous other virtues is a difficult task. Scupoli details a few of the stumbling blocks we experience:

There are some who are so overwhelmed by their sins that they never even consider the possibility of breaking their chains. Others want to free themselves from this slavery, but they do nothing to accomplish this. Some think they are secure, and for that very reason are very far from being so. Others, after attaining a high degree of virtue, fall all the more heavily. …

When the devil has enmeshed the soul in sin, he uses every means at his disposal to distract its attention from anything that would enable it to recognize the terrible condition into which it has fallen.

The devil is not content to stifle every inspiration from Heaven, and to suggest evil thoughts in their place. He endeavors to plunge it into new faults, either of the same or a more vicious nature by supplying dangerous opportunities to sin.

Thus the soul, deprived of Heavenly guidance, heaps sin upon sin, and hardens itself in its evil ways. Floundering in the mire, it rushes from darkness to darkness, from one pit to another, always moving father from the path of salvation and multiplying sin upon sin, unless strengthened by an extraordinary grace from Heaven.” (Scuplio, Dom. The Spiritual Combat and a Treatise on Peace of Soul. Tan Classics, 2010. 89-93)

In many ways the soul is the beacon which directs a man towards virtue. If a man is not careful, a sinful calcification can take place around the soul. It soon becomes difficult, if not impossible, to hear or see the beacon and before long the captain of the ship “rushes from darkness to darkness.”

If you seek to become a virtuous man or woman, then The Spiritual Combat and a Treatise on Peace of Soul is a must-read. If you are a Christian who has ever wondered, “Why do bad things happen to good people? Why does God foist trials and tribulations upon me?” then Scupoli’s work is for you. I would rank it with Francis De Sales’ Introduction to the Devout Life and Saint Augustine’s Confessions as an essential addition to your library.

Editor’s Note: I will send a copy of “The Spiritual Combat and a Treatise on Peace of Soul” to the first regular reader who asks.