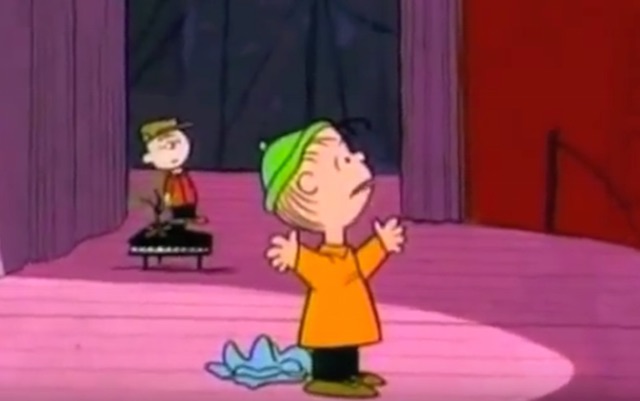 For a glimpse into the politically-correct minds of school administrators in the U.S., one simply needs to consider two stories concurrently unfolding in the news cycle.

In one instance a Kentucky public school district cuts any reference to Christianity during a theatrical version of A Charlie Brown Christmas. In the other, a Virginia school district defends a calligraphy lesson prompting students to write: “There is no god but Allah. Muhammad is the messenger of Allah.”

America 2015: Linus Van Pelt is too dangerous for the minds of elementary school children, but the shahada — the Muslim statement of faith — can be an official assignment given to high school students. 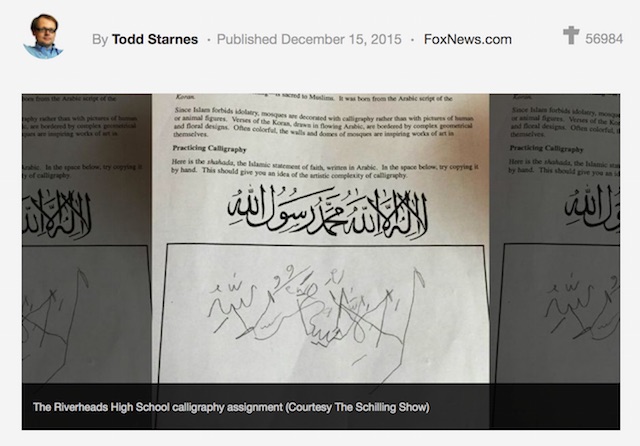 A Virginia school district is defending a classroom assignment that required students to practice calligraphy by writing the Muslim statement of faith, “There is no god but Allah. Muhammad is the messenger of Allah.”

“Neither these lessons, nor any other lesson in the world geography course, are an attempt at indoctrination to Islam or any other religion, or a request for students to renounce their own faith or profess any belief,” the district said in a statement provided to Fox News.

Students were also asked to try wearing traditional Islamic attire as “a part of an interactive lesson about the Islamic concept of modest dress.”

The district asserts that the teacher — who knew exactly what she was having students write — was merely asking her class to explore Arabic’s “artistic complexity.”

Meanwhile, Johnson County Schools in Paintsville, Kentucky, are adamant that a rendition of A Charlie Brown Christmas is tantamount to endorsing religion.

The district then announced it would remove any religious references from all of its Christmas plays. …

“As superintendent of Johnson County Schools, I recognize the significance of Christmas and the traditions and beliefs associated with this holiday. Over the past few days, there have been several rumors indicating that there would be no Christmas plays this year at our elementary schools. I want to clarify that all programs will go on as scheduled. In accordance with federal law, our programs will follow appropriate regulations. The U.S. Supreme Court and the 6th Circuit are official capacities and during school activities. However, our district is fully committed to promote the spirit of giving and concern for our fellow citizens that help define the Christmas holiday. With core values such as service, integrity, leadership, and commitment, our staff and students will continue to proudly represent our district as recently demonstrated by our many student successes.”

Got that? Schools can have Christmas plays — provided the holiday’s core inspiration, the birth of Christ, is never directly or indirectly addressed.

In the same month that an Islamic terror attack killed 14 and wounded 21 in San Bernardino, California, high school students are asked to practice writing ,“There is no god but Allah. Muhammad is the messenger of Allah,” but a classic Charlie Brown Christmas cartoon is somehow deemed a violation of federal law. Classic.

This is why home-schooling looks increasingly attractive to young parents with each passing year.