The power of prayer: A blueprint for realizing faith’s potential

It is incredibly tough to get those who do not believe in prayer to understand how it works. Even those who do believe in God often pray in strange ways and then get frustrated by the results. Since prayer recently helped me regain my work-related Twitter account after it was unjustly suspended, I will try to use that story to explain how it works.

During this whole ordeal I had a conversation with a friend about well-known personalities who did nothing to help me. I told my friend that it didn’t bother me because if God ultimately wanted to use them to help me, then He would. I prayed for an entire month, and last night I prayed throughout most of the night when an idea came to me: I would email Twitter’s CEO. I would make the case that he needed to intervene on my behalf. Then the words came to mind. When work started I didn’t know his email, but I took a chance on what I thought it might be — and I was right. Within 30 minutes of emailing him, my suspension was lifted and I received an apology from Twitter. A friend of mine said that what I did was something straight out of Ferris Bueller’s Day Off. I must admit, I did feel like the “The Sausage King of Chicago: Abe Froman.”

I nearly broke down into tears, knowing that my prayers had been answered. For someone who writes news for a living, Twitter is indispensable. Six-years worth of contacts and personalized news lists were restored. 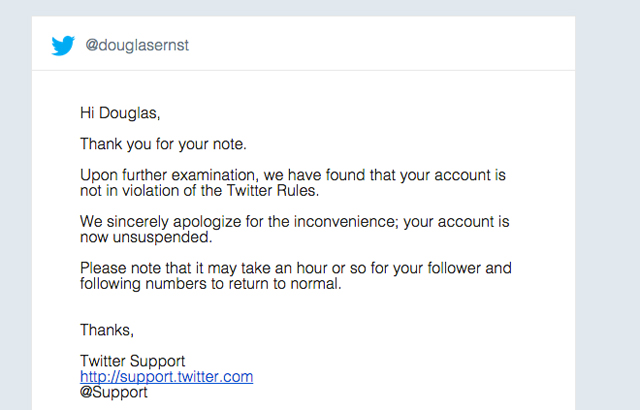 This is just one story of many that I can tell where prayer has worked miracles in my life. If you’re interested in understanding how I pray and prepare for prayer, then here is the general blueprint:

I can probably add to this list, but that is a good start. I’m confident that someone who takes this advice will see amazing results over time. It is a humbling experience to see just how prayers can be perfectly answered. Often I reflect on how seamlessly some of them have been answered and cannot help but well up. A passing glimpse at perfection — true perfection — is a thing of beauty, but at the same time it can be emotionally crippling. Perhaps others have had a different experience, but my own brief tastes of infinite knowledge and infinite love can only be dwelt in for mere moments. It is a paralyzing epiphany to realize that on many levels we are comically insignificant beings, yet infinitely loved by our Creator.

If you believe in God, then I hope my prayer blueprint can be of use to you. If you do not believe in God, then hopefully I have given you some worthwhile insight into a Catholic mind that’s been around since 1979. In either case, thanks for reading and know that there’s a good chance that on random nights I am praying for you, too.