What would the world look like if more people realized that they were spiritual beings temporarily housed in human form — and then acted accordingly? To give you a clue, I present you with the story of “Thomas Coats,” as chronicled by Steve Hartman for CBS. Every year Mr. Hartman goes out with a businessman who poses as as “Secret Santa.” The anonymous good Samaritan gives out roughly $100,000 during the holiday season to people in bus stations and thrift stores. The effects are amazing.

Steve Hartman: You don’t really know what people are really going to do with this money. Do you care?

Secret Santa Businessman: No, because one of the things that I do is I do not judge.

It’s easy to look at a man and make all sorts of judgments about who he is and what he represents, but that is a dangerous game to play if those judgments fill us with pride while sapping our ability to empathize with those less fortunate.  The Secret Santa Businessman does not fall victim to pride, and that is why the story gets better:

Thomas Coats: “I didn’t earn that.”

Secret Santa: “You did earn it, because I can tell you’re a good man.”

The Secret Santa Businessman says that Mr. Coats is a good man because he is. We all are. We all have the capacity for great good or great evil. Yin and Yang. The little devil on your shoulder vs. the little angel. However you describe it, that is the blessing and the curse of free will. We can be angels … or fallen angels, and those of us who realize that have an obligation to reach out a helping hand to those who have stumbled. It is our moral duty to remind others of the greatness inside them.

“When was the last time you heard that?” asks Steve Hartman to Thomas Coats. “Maybe … my mom?” he replies.

Steve Hartman: 30-year-old Thomas Coasts is a total deadbeat — at least by most accounts, including his own. Addicted to heroin, he recently hawked his own son’s toys for drug money. That’s how bad it is.

Thomas Coats: I haven’t worked in over a year. I’ve spent so much time in and out of treatment facilities.

Steve Hartman: Why his girlfriend hasn’t left him and taken their son is a mystery. Even to her. But she is now running out of patience, which is why the night before we met him, during another one of their many money fights, she suggested he try something radical.

Steve Hartman: And so, he did pray — for the first time since childhood. Then, out of the blue this saint shows up, slipping hundreds into his hand. You could almost see the wheels turning. That kind of kindness from a total stranger the day after he prayed … it was too much of a coincidence for this atheist to bear.

Thomas Coats: It’s amazing. That to me was a miracle. That was God saying: “Have you had enough, now? I’m going to show you something.” So from here on out, it’s up to me.

Steve Hartman goes on to say that Thomas checked himself in to a treatment facility, although this time “he says this will be the first time with a higher power at the helm.”

The point of this story is not to say that this is definitive proof God exists. I’m not making that claim. What I am saying is that those of us who do believe in God have to think long and hard about how we go about reaching out to atheists, the poor and those who are just generally different than us. 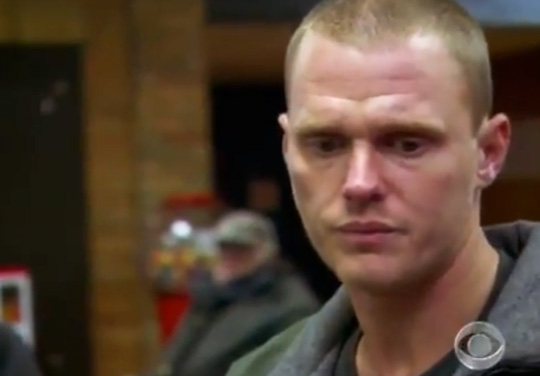 One of my Catholic friends, who is just as annoyed with rumblings that Pope Francis isn’t “conservative” enough, put it to me this way:

This is why I support the Pope. By not being judgmental, “Secret Santa” found this guy. Maybe Thomas kicks addiction, maybe he doesn’t — but for the first time in years he has hope. Pope Francis has drawn criticism for not being “conservative.” That’s dumb. The guy is super conservative, but he’s not judgmental. He actually extends a “hand” to those different from him. Atheists, gays, juvenile delinquents … it’s amazing what a non judgmental hand can do. Catholic church attendance is even up around the globe.

We are told faith the size of a mustard seed can move mountains. In the story, it was the guy’s girlfriend that 1.) hasn’t left him, and  2.) told him to pray. That is faith. Kudos to her.  I hope it works out for them.

This is why I think it is wrong to tell strangers they are going to hell. We (humans) don’t know that. It’s not our place to judge. I referenced St. Paul with that before. Second to Jesus, a huge chunk of the new testament is about/written by him. Before his conversion he made a living hunting down and killing Jews that converted to Christianity.  He worked for the ruling priest class of Israel and possibly the Romans. Now, he’s a saint.  He wrote of the tears when he felt Gods presence at his conversion, probably just like the “deadbeat” in the news story.

While I do not quite understand how individuals can walk through life and not realize that there are things at play beyond human comprehension, the fact remains: they’re here. As you move forward, try and figure out ways to reach out to those who are different from you politically, spiritually, and socially. Perhaps they’re just like Thomas, who went through his entire life with only his mother having told him he was a good man. Through your temperance, empathy, humility and random acts of kindness you too might become someone’s guardian angel — or the one who makes an atheist believe in God.

Related: Mysterious ‘angel’ priest at car crash reminds us of our true nature

Related: Break free of the Matrix: The 1-year challenge to see the world in a different light

Related: The effects of meditation: What if you could ask your nightmares why they haunt you?