Superior Spider-Man: Everyone but Dan Slott knows it’s inferior to its predecessor

It was only months ago that Marvel and Dan Slott gave Amazing Spider-Man fans a radioactive middle finger by giving the iconic character a send off only a villain could love.

As Dan Slott explained to CNN at the time:

For all intents and purposes, [Otto] was the adult Peter could have become, Spider-Man’s dark reflection. So what if we flipped it? What if we gave him a second chance? Peter’s final, heroic act was giving Doc all the memories and experiences that kept him on the right path. But is that enough? Can that overcome Ock’s true nature? (Dan Slott)

The answer is clearly no.

Over Easter weekend my wife and I went to Barnes and Noble for coffee and there were two months’ worth of Superior Spider-Man sitting on the shelves. Apparently, sales are not so “superior” in Lynchburg, Va. And so, I did a quick read, got what I needed to write a review and saved myself roughly $10 — which I promptly spent on Sweet Frog frozen yogurt.

Issues 5 and 6 of Superior show once again why liberal guys like Dan Slott often drop the ball when it comes to weaving a thought-provoking Spider-Man tale. Let us consider the evidence:

1. In Massacre, the audience has a character who has committed mass murder in the past and who is intent on doing so at the first available opportunity. 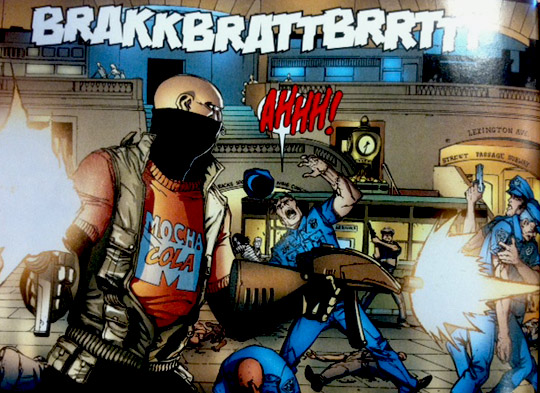 2. The guy is an expert, going so far as to have an explosive-rigged building filled with hostages as his ace in the hole. 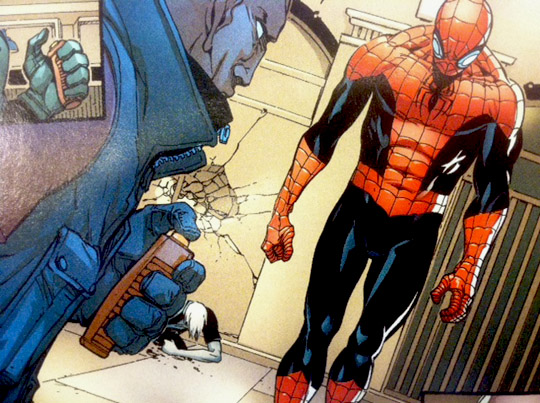 3. Doctor Octopus (in Peter Parker’s body) is a bright guy, and figured out how to save the hostages beforehand and disable the bombs. When Massacre clicks his detonator and nothing happens, it’s game over. 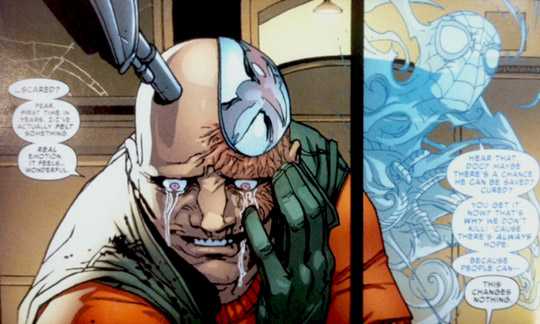 As usual, the criminal (in this case, one who isn’t supposed to be capable of emotions) fears for his life after he has been caught and his hangs in the balance. Funny how those epiphanies happen at just the right moment, isn’t it? And as usual, Dan Slott via Peter Parker tries to make the case that killing is always off limits for the hero because “there’s always hope” … for change. (Think Mr. Slott’s version of Peter voted for President Obama?)

If Peter Parker comes back to life, or takes back control of his mind — or does whatever the heck he needs to since the exact status of his soul is still in question — he should rename himself the Amazing Red-Herring Man, because Doctor Octopus rightly points out that sudden feelings of guilt and remorse changes nothing — particularly for the dozens of lives the murderer extinguished. The innocents are still dead. The family and friends and loved ones still must pick up the pieces while the murderer lives on. Over time the victims are forgotten about, and dupes like Peter Parker feel sympathy for the monster who must atone for his sins.

4. And so, it appears as though Dan Slott took the intellectually lazy way out, having the Superior Spider-Man then play judge, jury and executioner with a suddenly defenseless man. 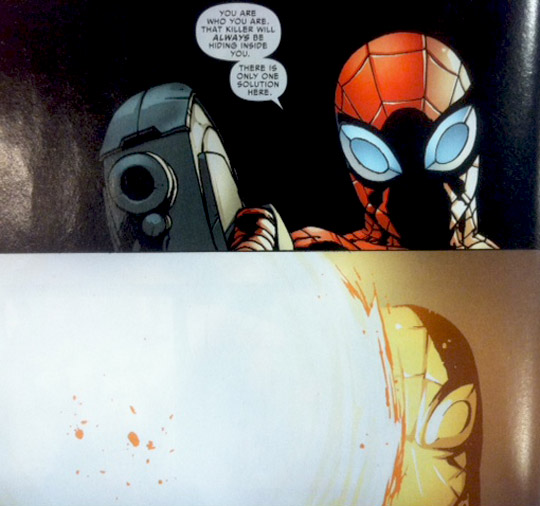 If Slott wanted readers to wrestle with a moral conundrum, wouldn’t it have been better to have placed the hero in a position where the only way to save a life was to take a life? That’s what law enforcement agencies and military men have to deal with on a daily basis. They are put into situations where they have a split second to act, and the only way to save innocents is to end the life of the men who threaten them.

5. Dan Slott doesn’t get that, and it shows when he fills Wolverine’s mouth with nonsensical, morally-relativistic pap. 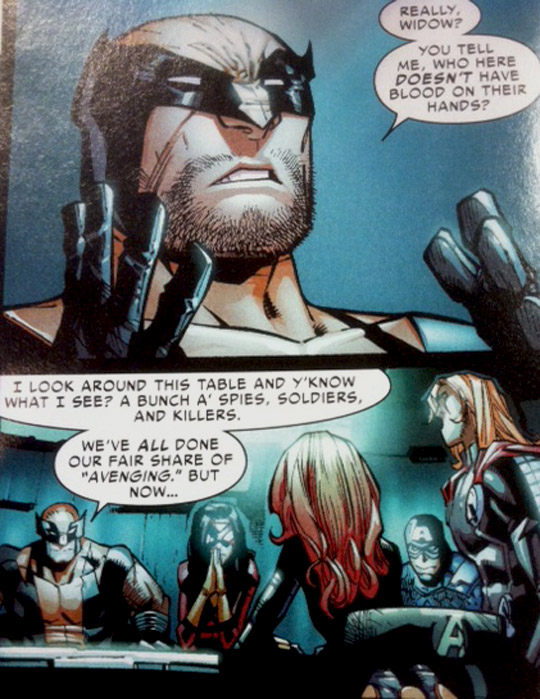 Wrong, Wolverine (aka: Dan Slott). Combatants on the battlefield do not have the same rights granted to civilians. That is another complex issue that Marvel readers don’t get to explore because to my knowledge there has never been a run where Captain America’s black ops against the Taliban were told. He was more interested in taking down the Tea Party than the Taliban over the past few years, which should tell you something about the intellectual courage of the writers and editors currently taking up residence at the “House of Ideas.”

Readers could have had an instance where Doc Ock killed while in Peter’s body in a way that left even Peter haunted by the fact that the right thing was done in an impossible situation. Pete would have forever asked himself: “What would I have done?” Instead, everything is clearly spelled out: Doctor Octopus did the wrong thing because he executed a defenseless man without a trial by jury.

6. Fast Forward to the end of Superior Spider-Man #6, and Ghost-like Peter is losing his mind that Doc Ock has beaten a couple of hack villains to a bloody pulp, which begs the question: Shouldn’t Ghost-like Peter have been in total meltdown mode the entire issue since Massacre apparently was executed on live television hours earlier? I guess technically it wasn’t shown, but it would be a rather cheap “out” if Massacre was spared.

Note: For those who take issue with the “live television” phrasing, the issue heavily implied that everyone knew what happened. Jonah knew. The Avengers knew. News reports mentioned that Spider-Man “neutralized” the situation . Massacre went to a place where he would get maximum media coverage. There would have been security cameras everywhere. These little things call “cell phones” exist. There were witnesses. Check out the Spider-Man Crawlspace review of issue #11 for more details. 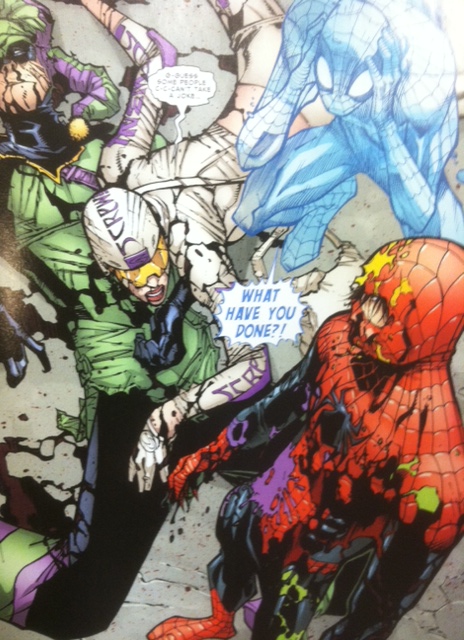 The bottom line is this: After six issues of the Superior Spider-Man, it is more apparent than ever that the decision to kill off The Amazing Spider-Man in the manner Mr. Slott did was not worth the cost in good will towards Marvel. For every interesting morsel readers are given to chew on, there are mouthfuls of spoiled stale ideas that remind them why “Superior” is vastly inferior to its predecessor.

Although, truthfully, why does Marvel care? These days, the guys in charge know that their Chinese censorship cop overlords will help bring in the cash, provided the artistic integrity is left at the door. I doubt that will be a problem for the guys who are asking you to root for the Superior Spider-wannabe-rapist.

Update: Newsrama has seemingly blocked me from commenting on a blog about … me. I guess when you tactfully defend yourself you’re a troll. Or perhaps if you make Dan Slott look bad the powers that be cut you off. That happens when you’re friends with the writer.