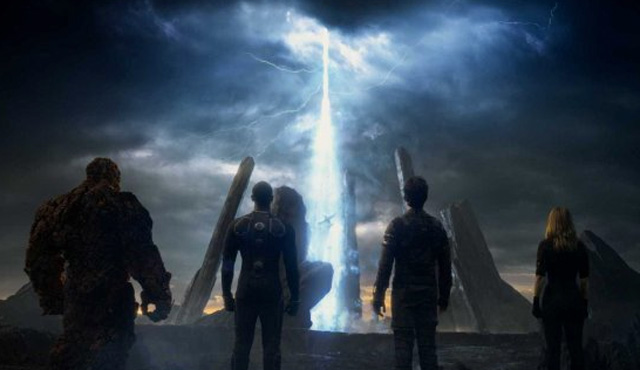 Michael B. Jordan is understandably frustrated. The new Fantastic Four movie looks like it will be a fantastic flop — not necessarily due to his efforts — but because it’s likely to be a melancholy and boring iteration of what should be a fun film. It looks like Fox hired the ghost of Edgar Allan Poe to be the cinematographer, and fans know it. In order to salvage some form of respect, Mr. Jordan has pulled out the handy-dandy race card.

Some people may look at my casting as political correctness or an attempt to meet a racial quota, or as part of the year of “Black Film.” Or they could look at it as a creative choice by the director, Josh Trank, who is in an interracial relationship himself—a reflection of what a modern family looks like today. …

Sometimes you have to be the person who stands up and says, “I’ll be the one to shoulder all this hate. I’ll take the brunt for the next couple of generations.” I put that responsibility on myself. People are always going to see each other in terms of race, but maybe in the future we won’t talk about it as much. Maybe, if I set an example, Hollywood will start considering more people of color in other prominent roles, and maybe we can reach the people who are stuck in the mindset that “it has to be true to the comic book.” Or maybe we have to reach past them.

To the trolls on the Internet, I want to say: Get your head out of the computer. Go outside and walk around. Look at the people walking next to you. Look at your friends’ friends and who they’re interacting with. And just understand this is the world we live in. It’s okay to like it.

Notice what Mr. Jordan does: he essentially lumps all critics into one group. Racists and trolls occupy the same tent as those with legitimate gripes (i.e., fans who want the on-screen Human Torch to match the one who they’ve read about in the comics for decades, and fans who are tired of politically correct pap). Mr. Jordan then tries to turn himself into a cultural martyr sent from Hollywood to save us all.

What group do guys like me fall under, Mr. Jordan? I belong to an interracial family and I generally like the big screen versions of the comic books I read as a kid to be faithful to the source material. I also find it weird to editorially mandate things like gay Iceman and She-Thor when creating new and interesting characters is an option.

Michael B. Jordan would not be writing op-eds like this for entertainment magazines if he thought Fantastic Four was going to be a huge success. One reason why no one cared that Samuel L. Jackson was the big-screen version of Nick Fury in 2008 was a.) because when he was cast he personified “cool,” and b.) Marvel Studios hit a home run with Iron Man.

Michael B. Jordan is not an American icon of cool, and Fox does not look like it will hit a home run with Fantastic Four this August.

As I have said before: it would annoy me if Blade or Rhodey were suddenly turned into white guys, but that’s not good enough to Hollywood actors or politically correct comic book creators. I and many others have to be on board with everything they come up with or be lumped into a category with racists and “trolls.”

The only way to stop this kind of tactic is to push back — hard — every time. If you do not define yourself, then guys like Michael B. Jordan will do it for you. When they pull the race card, you will be labeled a racist or a cultural dinosaur who needs to “go outside” more often.

In short, Fox’s Fantastic Four looks so flawed that the race of Johnny Storm is at the bottom of the list in terms of things to gripe about. The studio needs all the fans it can get at this point, because the buzz on the film seems to be, “Please let this bomb so the rights can go back to Marvel!” Opinion pieces that rely heavily on the race card are not helping Fox in its promotional efforts. If anything, the studio just looks desperate.