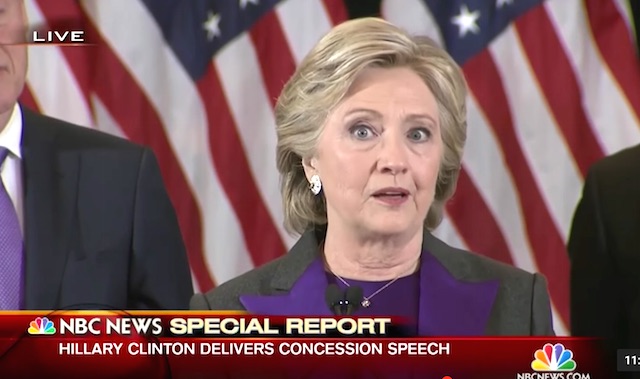 The tears may not be dry on the pillows of Hillary Clinton’s most ardent supporters, but now is the time to discuss one of the many reasons why Donald Trump handily defeated the former secretary of state on Election Day. The American people saw blatant evidence that a nexus of cronyism connecting powerful politicians, lobbyists, and federal bureaucrats kept a woman out of prison who clearly — clearly — should be in an orange jumpsuit.

Imagine if you will, dear reader, a case where you are entrusted with Sensitive Compartmented Information Facility (SCIF) intelligence. You want to run for president one day, but you don’t want reporters or congressional committees gaining access to your work through Freedom of Information Act requests and other legal means. You decide to run the nation’s top secrets through a secret email server in your home, and it somehow winds up on the laptop of Anthony “I-sext-teenagers” Weiner.

Question: Is there any doubt in your mind that you would be in shackles in a heartbeat?

Answer: Of course not, which is one of countless reasons why voters revolted against Mrs. Clinton in droves on Tuesday. 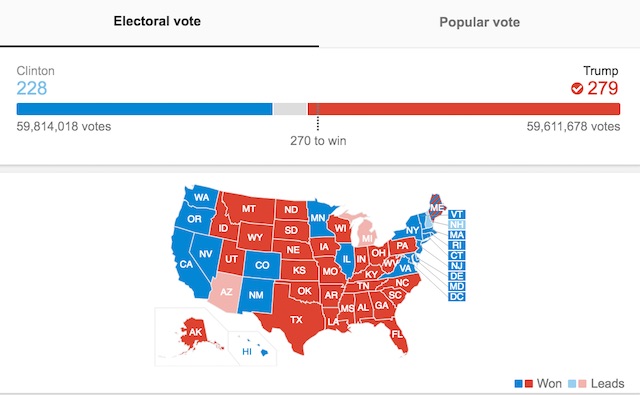 Anyone who is remotely familiar with Hillary Clinton knows that she has drooled over the presidency for decades. There was an insatiable craving for power in her eyes that even the writers of Saturday Night Live could not deny. She acted as if she were entitled to job, and so the American people rightly denied her the one thing she wanted more than anything in the world. Her friends in high places may have kept her out of jail, but voters were determined to keep her out of the White House.

This all seems pretty straight forward, doesn’t it? Wrong. To political commentators like like Van Jones, what really happened last night was a “whitelash against a black president.” That may be news to the millions of white voters who voted for Mr. Obama — twice — before pulling the lever for Mr. Trump, but I digress. The point is that no level of electoral punishment is brutal enough to cause many well-known members of the media to engage in serious self-reflection.

Here is the simple truth: If the Democratic Party did not want to lose the 2016 U.S. presidential election, then it should not have nominated a woman who is the epitome of corruption. Case closed.

Anyway, feel free to share your thoughts on the election in the comments below. I’d love to hear what you have to say.

It is extremely interesting that JPMorgan Chase — historically a solid investment bank — makes some dunderhead investments and loses $2 billion, and suddenly it’s getting investigated by the Department of Justice. Meanwhile, the United States Postal Service loses billions every year and nobody bats an eyelash.

The Postal Service said its loss widened to $3.2 billion in the first three months of 2012 and repeated on Thursday its warning that it will likely default on payments to the federal government unless Congress passes legislation offering some relief. …

The agency, which does not receive taxpayer funds and has been losing billions each year as Americans communicate online, said it lost $2.2 billion in the same period in 2011. …

The Postal Service lost $5.1 billion in fiscal year 2011 and was unable to make a massive annual payment for future retiree health benefits, which is required by law. The agency said much of the loss during the second quarter of 2012 came from setting aside funds for the $11.1 billion that is due this year.

So it “does not receive taxpayer funds” but yet it requires “legislation offering some relief.” Am I living in the Twilight Zone? It doesn’t require taxpayer money, but yet it does to the tune of $5.1 billion dollars if it’s going to survive? How does that work? If someone can tell me how this so-called independent agency can simultaneously be independent from and dependent on the federal government for its survival, please let me know. Has the USPS ever turned a profit in the past decade? If the answer is no, then its “independent” status is moot.

As our good friends at The Heritage Foundation note:

While the focus right now centers on the pre-funded pension benefits, the real reason for the USPS’s dire financial straits is the steady decline in mail volume as customers increasingly use electronic communications. Times and technology have changed; the USPS has not.

Regardless, the point is, why is JPMorgan Chase being singled out for bad decisions when the United States Postal Service made 5.1 billion bad decisions in a single year?

The FBI has opened an inquiry into the multibillion-dollar trading losses at JPMorgan Chase, stepping up pressure on the bank after key U.S. agencies said they were looking into high-risk trades that first drew regulators’ attention last month.

Do you know what happens when you stop people from taking risks in a capitalistic economy? Answer: You stop people from being rewarded for those risks. JPMorgan Chase, again, has a good track record of making money for its shareholders. The federal government has a great track record of losing trillions of dollars and then telling you not to worry about it. They do that because the politicians in charge now will be dead or long gone by the time you and your kids get run over by a debt-Zamboni the size of a house.

But you should worry about it, and Exhibit A is Greece. The country is imploding before our very eyes, there’s a run on banks and they have no one to blame but themselves. The difference between Greece and the United States is that no one can bail us out. No one. We’re too big, and if we fall it will be the crash heard ’round the world. And like the Greek tragedy happening overseas, it will be our own fault.

In short, White House Press Secretary Jay Carney inadvertently spelled out the limits of the federal government when he admitted reams upon reams of regulation “can’t prevent bad decisions from being made on Wall Street.” Most Democrats are actually calling for more regulation, which does nothing to fix Carney’s astute observation of the human condition and everything to highlight why liberals are incredibly scary; in their insatiable quest to control the uncontrollable they are willing to use any excuse to consolidate more power. They truly believe that if only they have their hands on more levers of power they’d eventually find the right combination of pulls and pushes and tweaks to get their desired result: total equality.

But human beings are complex. Some are smart. Others are dumb. Some are ambitious, while others are lazy. Most are honest, but many are devious. And so, the liberals’ plans always fail, but instead of ceding power to capitalism — that beautifully imperfect system that sorts through all the madness better than any other that has ever been devised — they double down. Again and again they ask for more power and more money, and every failure of theirs is attributed to a JPMorgan Chase or Bain Capital or Mitt Romney or some boogeyman that can distract from the failures of centralized planners run amok.

Don’t be distracted by their attempts to draw attention from their abysmal performance. Our elected leaders have composed a national disaster to the tune of $16 trillion dollars. They should be the object of our disdain at this time. An investigation of JPMorgan Chase, you say? I can think of 535 other investigations that would be more worth your time, Attorney General Eric Holder. Hint: They’re all local to Washington, DC.