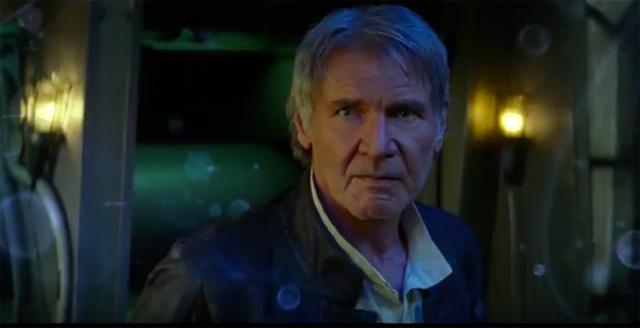 The new trailer for ‘Star Wars: Episode VII — The Force Awakens’ was released on Monday night — and it delivered. Unfortunately, JJ Abrams’ political activism also has awakened the kind of Grade-A trolling one can only find via Twitter.

Harrison Ford’s narration for the new trailer is incredibly interesting when it is juxtaposed with his thoughts on The Force in ‘Star Wars: Episode IV — A New Hope.’

A young Solo once said:

Luke Skywalker: You don’t believe in the Force, do you?

Han Solo: Kid, I’ve flown from one side of this galaxy to the other, and I’ve seen a lot of strange stuff, but I’ve never seen *anything* to make me believe that there’s one all-powerful Force controlling everything. ‘Cause no mystical energy field controls *my* destiny. It’s all a lot of simple tricks and nonsense.

Now, after years of experience, Solo sounds like a former atheist who has experienced the metaphysical first-hand.

Han Solo: It’s true. All of it. The Dark Side. The Jedi. They’re real.

‘The Force Awakens’ looks like it will have something for everyone. If successful, it will be a beautiful bridge between generations of fans.

The only possible obstacle to enjoyment could be Abrams’ penchant for political activism, which helped inspire the #BoycottStarWarsVII hashtag Monday night. The top-trending hashtag included the following tweet from an account identified as End Cultural Marxism:

While it sounds far-fetched for ‘The Force Awakens’ to be “anti-white,” it is not hard to believe Abrams would allow politics into his films — because he has done it before.

‘Star Trek: Into Darkness’ courted controversy when its writers and star actor Benedict Cumberbatch explicitly said it was social commentary on the Bush administration’s foreign policy.

It was also just over one week ago that Abrams helped raise $750,000 for the Democratic Party at his Pacific Palisades, California, home.

After a praise-heavy intro by the Star Wars director, Obama spent about an hour and 15 minutes “passionately” talking to around 20 guests about issues such as gun control, prison reform, voter turnout and the economy, according to one source. The event was estimated to have raised over $750,000 for Democratic Party war chest, say insiders.

In town for the afternoon, Obama was speaking in the living room of the Pacific Palisades home of Abrams and his wife Katie McGrath at a $33,400-a-ticket roundtable. The event at the Star Wars director and longtime supporter’s pad to raise cash for the Democratic Senatorial Campaign Committee was the first of three fundraisers POTUS will hit while in Los Angeles for less than 7-hours today.

It is highly unlikely Disney would allow its first ‘Star Wars’ movie to get too heavy-handed with politics, but it is not unreasonable to believe Abrams would stitch his own activist politics into the finished product.

My prediction: ‘The Force Awakens‘ will be a fun movie that people of all ages and ethnicities can enjoy, even if there are subtle instances where JJ “I -hold-huge-Hollywood-fundraisers-for-Democrats” Abrams tries to sneak his own brand of activism into the finished product. That is par for the course in Hollywood. The key thing is to simply be aware of it when it happens.