I wrote not long ago that Herman Cain could win. Way back in December I tweeted on Cain as possible VP pick. I believe he can win it all, and many who saw him talk about his victory over colon cancer believe it as well. Hurdles he faces are cancerous media that eat up air time covering gay soldiers instead of global economic meltdowns, or apprehensive voters on the verge of letting their fears create a self-fulfilling prophecy.

Herman Cain has been funny. He has shown heartfelt emotion. He has shown command of economic issues. He has shown an ability to learn from his mistakes. His stump speeches are inspiring and uplifting and genuine. His known flaws in no way disqualify him as a candidate.

Anyone who wants to see the melting bowels of Morgan Freeman, Bill Maher, and the liberal media race baiters on national television just needs to put up a black champion of the free markets and our founding fathers against “The One.” Those who want to see Charles Blow of the New York Times blow a gasket only need to empower Herman Cain to do just that.

Herman Cain isn’t a career politician, but he was standing up to Bill Clinton in 1994. In 2011 he’s been standing up for free market principles, balanced budgets, and limited government in ways your average American can understand and appreciate. It appears as though the biggest obstacle standing in his way are primary voters who might not have the courage of their convictions.

Whomever you vote for, let your principles lead you. Political calculations are for Beltway mathematicians who see zero problems with 14 trillion dollars of debt.

Update: Traffic is spiking, in part, because this was posted before the Florida straw poll results were in. The moral of the story is that the people will determine who wins—not the media.

Billionaire/reality TV star/national joke Donald Trump wants to assure the American people he’s would give it some, “serious, serious thought,” about running for president if the economy stays in the toilet. The last time he gave Americans some serious thought he came across like Toucan Sam, so he’s going to have his work cut out for him if he’s ever going to get Marco Rubio credibility.

So far, Trump has a long way to go:

As he did when he considered a presidential run earlier this year, Trump blamed a lot of the problems in the U.S. economy on “foolish leaders” who allow other countries — principally China and the members of OPEC — to steal jobs and keep the U.S. over an expensive oil barrel.

Donald Trump is a blowhard in the vein of Chris Matthews. Some people like that. They’re good for entertainment, which is probably why they both have television shows. However, they’re also not taken seriously be serious people. Snake-oil salesmen can rile up a crowd, but they can’t trick a well-informed people. And right now the public is doing its homework. The main drivers of debt are Social Security, Medicare, and Medicaid. If you don’t fix them, you’ve essentially fixed nothing.

The sad thing about the bills being debated in Congress is that they’re ultimately useless if they don’t fundamentally change the way our entitlement programs are structured. If a deal is reached a handful of politicians will pat themselves on the back, but the main problem will still be unresolved. It’s not going away. Sadly, neither is Donald Trump. 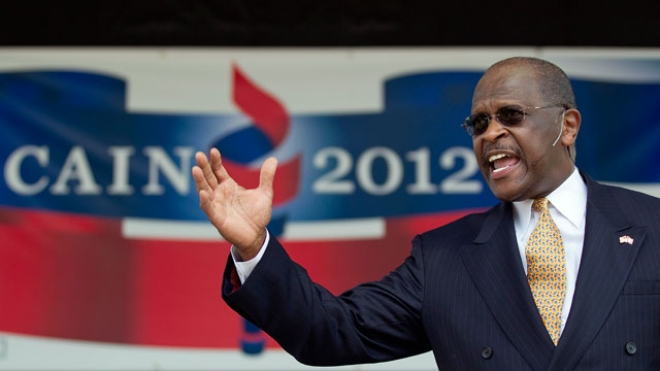 I’ve heard a few smart people tell us that Herman Cain can’t win. The only problem with that is––they’re wrong. Sometimes the smartest guy in the room wants to be the smartest guy in a really big room (say, one the size of a cable news audience), and then they overplay their hand.

Let me tell you a little thing about Beltway experts, whether they’re on the left or right. “Experts” like many who say that Herman Cain can’t win, have an enormous amount of knowledge. They’re like oceanographers that know everything about the deep. In fact, they’re so invested in the ocean that they spend all their time learning about what goes on miles beneath the surface, where no sun shines, where odd things exist and random clues to the origins of life sit waiting to be discovered.

Those same scientists often get a superiority complex because the average person can’t name rare bacteria living in pitch black, at pressures that would turn your brain into a sand dollar. But what they don’t get is this: The average person doesn’t need to be an “expert” to have an adequate understanding of how the world works, what lurks in the shadows, what to watch out for, and how to navigate their immediate environment.

In the political realm, principles can guide you.  They can be applied to any situation, and more often than not you’ll get the “right” answer if you don’t abandon them. You don’t need to be lawyer to understand the Constitution. It was written that way on purpose! It’s bad enough that the liberal Beltway elitists have tried to convince Americans that comprehending the Constitution is out of reach unless you have a law degree. Now we have Beltway elitists from the right who try to convince Americans that unless you went to Harvard or Yale the presidency isn’t up for grabs.

They’re wrong. Herman Cain’s resume is strong. His message resonates with people. He’s forceful, yet always in complete control. He knows how to articulate the conservative message in ways everyone can relate to.

The next time you get the feeling that the commentator on TV isn’t impressed by a Masters degree from Purdue University– tune them out. The next time a Beltway elitist tries to force a candidate on you, throw them overboard. Then tell them to study the remnants that sink to the bottom of the ocean. If they’re lucky, they’ll find John McCain’s 2008 campaign…or bin Laden’s corpse (take a picture for me!)

Ron Paul has a distinct honor: he’s the first man to simultaneously throw his hat into the presidential ring and disqualify himself in one fell swoop. A political nanosecond after announcing his campaign, Paul decided Pakistan’s definition of “sovereignty” (i.e., one is sovereign even if they have next to zero control over large swathes of land populated by terrorists, and an intelligence service infested with them) is one that would fly with the American people in 1776, 1787, or 2012.

On killing Osama bin Laden with Seal Team Six instead of “working” with the Pakistanis:

“I don’t think it was necessary, no. It absolutely was not necessary,” Paul said during his Tuesday comments. “I think respect for the rule of law and world law and international law. What if he’d been in a hotel in London? We wanted to keep it secret, so would we have sent the airplane, you know the helicopters into London, because they were afraid the information would get out?”

Since Ron Paul couches everything in his infallible knowledge of the Constitution, I’m looking forward to his followers repeating the red herring, as if the Founding Fathers would have agreed. As Ed Morrissey rightly points out, the UK isn’t Pakistan—yet. Years ago Mark Steyn looked at the demographics and laid out some ominous trend lines for England (i.e., Muslims having babies while Brits sit out the baby-making game will have interesting repercussions in the decades to come), but as of now your run-of-the-mill MI-5 guy isn’t dreaming of chopping off heads. ISI is a bit more “nuanced”, to say the least.

On another level, the answer to Ron Paul’s question about sending in planes to London is, “Perhaps. It depends on the circumstances.” Since when does the Constitution limit the United States from acting in its own interest when national security is at risk? It doesn’t. Our rights don’t come from bureaucrats in Belgium, they come from the Creator.

If it’s determined that a significant threat to our God-given rights resides in London, and that conditions exist that warrant acting unilaterally, any sane President will do so.

Ron Paul’s argument against capturing and killing Osama bin Laden the way we did is based on the false premise that somehow there’s an ideal notion of sovereignty that trumps common sense. Does anyone think that Barack Obama wouldn’t have preferred a less risky endeavor, one spearheaded with more cooperation with the Pakistanis? President Obama, as liberal as he is, had a reality-slap given to him upon entering the White House. For all his faults, Gitmo is still open. Drones are still still dropping bombs. And our Special Ops heroes are still doing what needs to be done.

There’s a reason for that. And someone who’s been around for as long as Ron Paul should know it. The fact that he doesn’t speaks volumes.