The 2016 U.S. presidential election of Donald Trump is not even one week old and it is already paying cultural dividends. The very same people who for months worried about the sanity of the Mr. Trump’s supporters are melting down. Hollywood activists like Joss Whedon are using coup-like rhetoric, protesters are destroying private property, and Safe Space America advocates are terrified because voters would not allow them to turn the nation into a giant college campus.

And then we have artist Humberto Ramos, a man who so desperately wants a safe space that he is refusing to attend conventions in “red states.”

Continue on, dear reader, as I break it down into its many embarrassing elements.

“I remember my first trip to the USA as a life changing event, it was 1992 and for the first time I arrived to the land of opportunity, where dreams come true. I felt I got to the place where everything was possible if you work hard for it, so I did and that hard work paid off as a wonderful career filled with success and personal pride for the achievements accomplished but no professional goal could even get close to what it is to me the thing I thank the most about my job, the amazing chance to meet people from a different country, a different culture and background a different language who became my friends, people both colleagues and fans who honored me with their sincere friendship and love, their care and warmth. Every single time I’ve step into the USA I felt at home some of people I get to see at every show I am invited to have slowly but strongly turn into my second family, some of them I even get to see them more frequently than my blood family, I always felt welcome to the USA until last Wednesday, November 9.”

Humberto Ramos came to the U.S. decades ago with the idea that The American Dream was attainable — and within a short amount of time his theory was verified through hard work and determination. He felt nothing but “care and warmth” from the vast majority Americans.

“I, as well as the rest of the world witnessed with more sadness than horror how that map in the TV screen turned red a color that means stop, danger or beware I couldn’t believe my eyes. I understand politics and also understand that every single person is entitled to a political orientation which I can agree with or not, I have dear close friends whose political orientation is the total opposite to mine, I’ve always respected that and will keep respecting because I strongly believe this is the only way this insane world can heal…. through respect.”

The artist acknowledges that he has met many “red state” friends, who have done nothing but wish him the best in his personal and professional endeavors.

“I understand the needs and the urge for a change in a way that make us hope for a better future to our families, believe me, we in Mexico sadly know that better than no one else. I respect when you choice for a fresh new approach, I respect the right for this country I admire to vote different from what us outside the USA wish. but when the new elected president’s very first campaign speech address me, a Mexican who constantly visit your country I can’t but take his sayings as a personal offense, when he said Mexicans where …. well, all the things he said I thought: nobody will take this guy for real, I thought he will say he crossed the line an apologize, I thought he as a candidate for a respectful party will moderate ….. never happened.”

Yes, Donald Trump’s Republican primary speech certainly addressed Mexicans. What Mr. Ramos leaves out is that the future president-elect was talking about people who are entering the country illegally.

Reasonable people have concluded that Mr. Trump did a horrible job articulating his point, but he was clearly talking about illegal immigration and the problems that come from having no control over the southern border. Humberto Ramos apparently cannot make a distinction between legal and illegal entry into the United States, but at least 60 million Americans (many of them Hispanic) had no trouble doing so on Nov. 8.

“After witnessing the USA election I will be respectful of the decision taken and I will keep respecting your country, your people and your laws, but also and above all I respect myself and my country and I don’t take for granted Mr. Trump’s speech and the people to hear it and embrace it, I know when I’m not welcome and I won’t expose myself to be offended or mistreated, there is no need.

So I want to communicate that four at least the next 4 years I decide NOT to attend to any conventions that take place in the red states, those states who voted for Mr. Trump, those states where I am clearly not welcome.

For the fans. I ask your understanding and support. Hey, we can meet in many shows across your beautiful country but please understand I can’t go to a house I’m not being invited, the vote clearly says that.”

Your friendly neighborhood blogger lives in a “blue” state and has “blue”-favoring relatives, but I am not actively looking for a new home or avoiding family members.

Unlike Mr. Ramos, I am mature enough to understand that just because someone favors a different public policy than me, it does not mean I am “not welcome” in their presence.

“One last thing, I love the USA and I love your people, those who share love and care, to all you we from the world beg you, don’t let the bullying an hatred win, we stand with you … make America great. Yes, you can.”

That is great advice, but it seems as though it should be applied to left-wing activists like Joss Whedon.

“This is simple: Trump cannot CANNOT be allowed a term in office,” the Save The Day Super PAC creator tweeted Monday. “It’s not about 2018. It’s about RIGHT NOW.”

Question: Who should Humberto Ramos fear more — Donald Trump, who only wants to deport people who entered the country illegally while millions of others respect our immigration laws, or guys like Joss Whedon?

All sovereign nations have immigration laws (do a little homework on how Mexico treats immigrants from Latin America), but not all of them have millionaire Hollywood activists who use coup rhetoric when elections don’t go their way. One would think Mr. Whedon would be a bit more responsible with his words now that dozens of arrests have been made in Portland, Oregon, due to destruction wrought by left-wing protesters.

Finally, this post would not be complete without mentioning Dan Slott (who seemingly deactivated his Twitter account Monday because he too needs a temporary safe space from all the Donald Trump news out there).

Ask yourself this question: Is it more likely that upon hearing news that Donald Trump would be the 45th commander in chief that racist white people got into their Dukes of Hazzard cars and attacked Muslims, or that most reports were stupid college kids exaggerating the facts, political fights that got out of hand, and outright hoaxes? 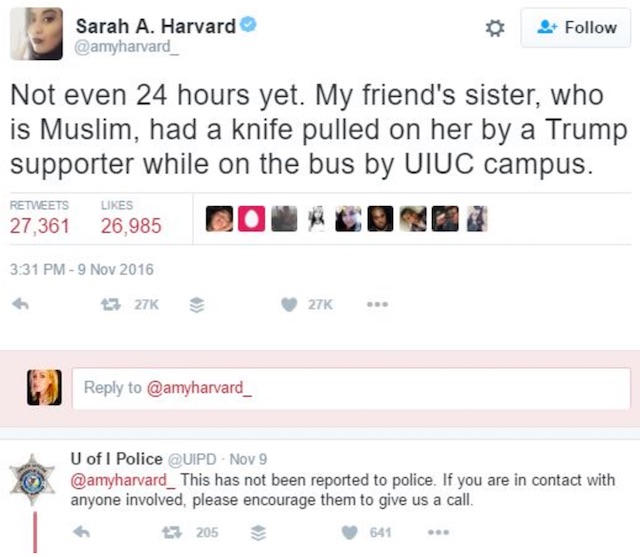 The reason why the Dan Slotts of the world cannot take this new political reality has little to do with anything truly scary about Donald Trump. A political earthquake happened that makes normal people reexamine their existing assumptions about the world, but Dan Slott and his friends are ideologues. Therefore, they have decided to double down on the “Trump is Hitler … Trump is Darth Vader” theory that has been peddled for months.

If I see Mr. Ramos sometimes in the near future within my “blue” state, then I will have two words for him: “Grow up.”