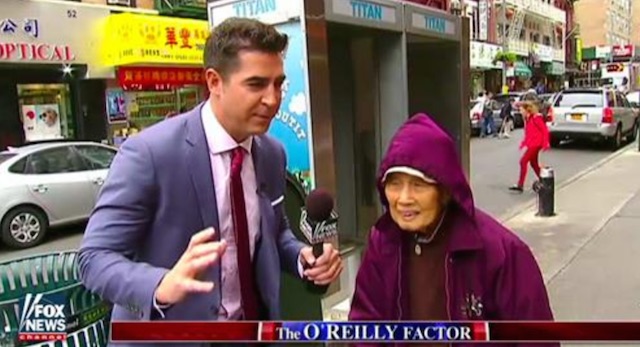 Fox News regularly fights the refrain that it is filled with a bunch of racists and bigots. Given that, one would think that producers would shy away from material that feeds the narrative. If you thought that, then you would be wrong! O’Reilly Factor producer Jesse Watters came out with a “Chinatown” segment this week that was one of the most disgusting things I have seen on a cable news station in years.

As a staunch conservative, I will now explain to you why friends of limited government should vehemently condemn the network for putting this “political humor” on the air.

Conservatives like to think of themselves as politically incorrect, but there is a difference between speaking uncomfortable truths and being a low-life jerk. Jesse Watters does not know the difference between the two because he approached people who did not understand English, asked them culturally insensitive questions, and then exploited their inability to communicate to mock them.

That, dear reader, is not “politically incorrect” — that is mean. And for some reason people on social media do not seem to get this. 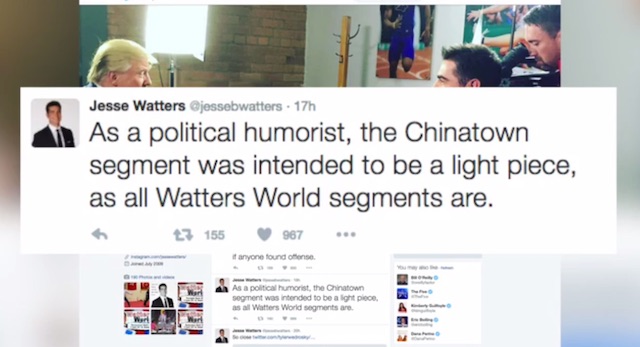 As I told multiple individuals over the past few days, what Jesse Watters did was one step removed from asking a Chinese stranger what “Ching-Chong Ching-Chong” means. The guy literally asked people if he should bow to say hello, if it was the “year of the Dragon,” and if they knew karate. He preyed on the ignorance of an old woman for a cheap joke, and issued a non-apology apology when he was called out by millions of people with a functional moral compass.

What is extra grating about Mr. Watters is that he did what all bullies do — he went after an easy target.

Would Jesse Watters go into a Muslim neighborhood and makes “jokes” to Arabic-speaking women about washing feet in the sink? No.

Would Jesse Watters go into a community of Somali immigrants and joke about child soldiers? No.

Would Jesse Watters go into a Jewish community and joke with people who only speak Hebrew about rhinoplasty? No.

The reason why Mr. Watters created this “joke” the way he did was because he knew he could get away with it in an asian community. If he pulled that level of racial or cultural insensitivity in other areas, then he would have received a black eye and a trip to the hospital.

If you ever wondered why minority groups tend to shy away from the Republican Party, then Jesse Watters’ “Chinatown” is a great learning tool. There is nothing wrong with racial jokes in the appropriate forums (e.g., Comedy Central roasts), but it is certainly beyond the pale to use an immigrant’s language barrier as a springboard for ridicule.