Colin Kaepernick is an NFL millionaire who has been rooted on for years by stadiums filled with Americans of all colors. He was adopted by family that obviously instilled in him the kind of work ethic it takes to break into professional sports. Despite living in the freest nation the world has ever produced (while pulling in $19 million per year), he now says he cannot stand for the national anthem because America “oppresses black people and people of color.”

The NFL released his statement on Saturday after news of his decision spread:

“I am not going to stand up to show pride in a flag for a country that oppresses black people and people of color,” Kaepernick told NFL Media in an exclusive interview after the game. “To me, this is bigger than football and it would be selfish on my part to look the other way. There are bodies in the street and people getting paid leave and getting away with murder.”

Yes, that’s right, because America isn’t perfect Mr. Kaepernick says he cannot show pride in the American flag. Someone should ask the formerly productive quarterback if he can name one country on earth where everyone acts like angels and there are no skeletons in the closet. If he cannot name such a place, then he should be informed that he is an ignorant fool.

Yes, racial issues are “bigger than football,” but the universal principles the nation was founded upon are bigger than random incidents of racism in a nation of 350 million people.

The Preamble to the U.S. Constitution states:

“We the People of the United States, in Order to form a more perfect Union, establish Justice, insure domestic Tranquility, provide for the common defense, promote the general Welfare, and secure the Blessings of Liberty to ourselves and our Posterity, do ordain and establish this Constitution for the United States of America.”

Can anyone deny that millions of Americans strive every single day to achieve the goal of “a more prefect Union”? Countless men and women have died to secure liberty for future generations, and yet the Colin Kaepernicks of the world think it is all diminished because some individuals fall short of our highest ideals. 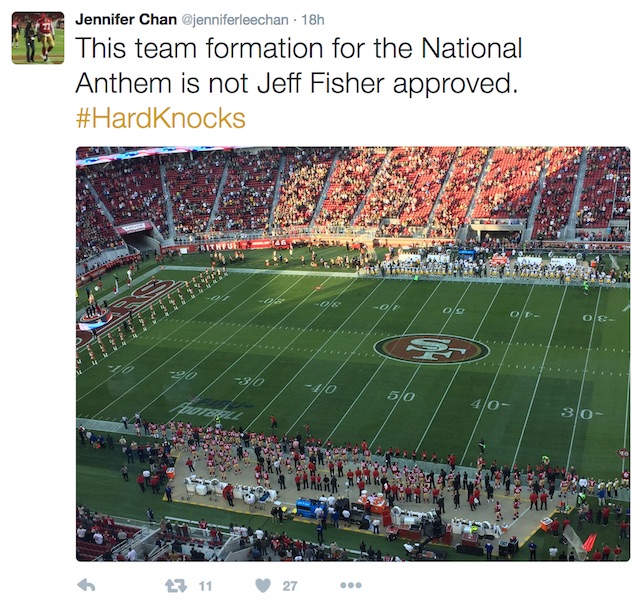 Colin Kaepernick should be ashamed of himself for using the flag to exploit his own political activism — while simultaneously putting the organization he works for and his teammates in a horrible bind. What makes the situation worse is that if the team decides to let him go because of his poor performance on the field, then he will conveniently say it was done for racial reasons.

Look at the picture of the San Francisco 49er’s entire team — white, black, asian, and hispanic men and women from all across the U.S. — and then look at the one goof sitting down by himself — benched — in between two jugs of Gatorade. Their behavior should tell the quarterback that the national anthem transcends the contemporary obstacles we face, but for whatever reason the message does not sink in.

Mr. Kaepernick may be exercising his right to free speech, but he is not a leader. He is a selfish man who took attention away from his team’s primary mission — to win on the football field — and focused it all on his political frustrations. If I were a fan of the San Francisco 49ers, there is no way I would be rooting for the guy.