Zendaya as Mary Jane? Ask about red hair for the next year and you’ll be called a ‘racist’

And so it begins — the great new excuse to call people “racist” for the next year.

News broke on Thursday afternoon that Zendaya will be playing the iconic role of Mary Jane in next summer’s latest Spider-Man movie, Homecoming.

Diehard Spidey fans have long speculated about whom the 19-year-old Disney Channel star would portray in Sony’s high-profile reboot of the superhero franchise, starring British actor Tom Holland as a teenage Peter Parker, a.k.a. Spider-Man.

At least one recent draft of the script has Zendaya’s character dropping several clues to her identity as Mary Jane, one of the most familiar love interests in the Marvel superhero’s universe — and played by Kirsten Dunst in Sam Raimi‘s 2002-07 movie trilogy starring Tobey Maguire as the webslinger.

Zendaya, the star of the Disney Channel series “Shake It Up!” and “K.C. Undercover,” was cast back in March to play a “key role” as a character named Michelle.

Your friendly neighborhood blogger has plenty of thoughts on Sony’s movie, but what concerns me most is the knee-jerk reaction by race-obsessed goons to label anyone who wants to see a beautiful redhead on the big screen as “raaaaaaacist.”

One of the first race-runners out of the gate was Devin Faraci of the website Birth. Movies. Death. He worries about the “next racist fanboy outrage,” (because honoring source material is apparently ‘racist’ nowadays).

The comments section of websites like The Wrap (You will never find a more wretched hive of scum and villainy) was just as bad.

Ah, yes, all those “racist white nerds” who like their Blades and Rhodeys black and their Mary Janes white with red hair…they’re so weirdly racist!

The good thing about Sony’s habitual screw-ups when it comes to…pretty much everything…is that at this point fans only want to see a good movie. My prediction is that Zendaya — who is certainly beautiful  — will do just fine.

It’s hard to do a worse job than Kirsten Dunst, so as long as Zendaya captures the essence of MJ’s character then most long-time fans will forgive the studio’s deviation from the comics.

It is much harder to turn the other cheek, however, with writers who salivate at the chance to spit out charges of racism over the slightest disagreement.

What do you think of Zendaya’s casting? Do you agree? Disagree? Do you think it was strange of Sony to keep it a secret for so long if the casting is not supposed to be a big deal? Let me know in the comments section below.

Update: Dan Slott decided to weigh in on the issue, and he was in rare form with his Straw Man arguments and specious claims. I cover it in the comments section, but decided to take a screenshot of the embedded tweets since he has a habit of deleting them when things get out of hand. 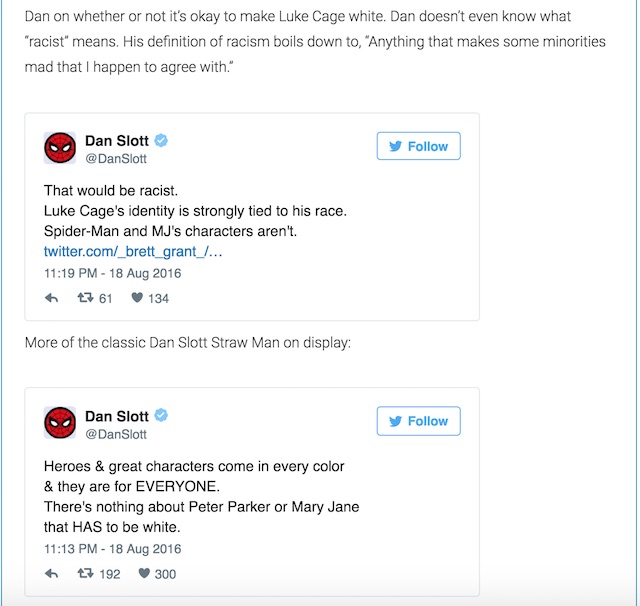