Question: What could be better than watching Hollywood actor Leonardo Dicaprio lecture the world on Climate Change when everyone knows he loves to fly around in private jets for pleasure, party on giant yachts, and leave a bigger carbon footprint in one year than the average person would in 10 lifetimes?

Answer: Watching Hollywood actor George Clooney fidget in his seat when he is asked about hosting a fundraiser for Hillary Clinton — couples paid up to $353,400 to attend — while also lecturing Americans on the corruptive nexus between money and politics.

First, we have Chuck Todd of “Meet the Press” asking Clooney about his fundraiser for presidential hopeful Clinton and protests by supporters of Vermont Sen. Bernie Sanders.

“Do you look at how much is being raised, and I think the cost of the Friday night dinner [was] $350,000 a couple to be a co-chair. Do you look at it yourself and think that’s an obscene amount of money?” Todd asked Saturday.

Clooney’s response was to admit that it is a legitimate gripe, but that he was going to continue being a part of the problem anyway.

“Yes. I think it’s an obscene amount of money. I think that, you know, we had some protesters last night when we pulled up in San Francisco and they’re right to protest. And they’re right to protest. They’re absolutely right. It is an obscene amount of money. The Sanders campaign, when they talk about it, is absolutely right. It’s ridiculous that we should have this kind of money in politics.” — George Clooney, April 16, 2016.

In George Clooney’s mind, the National Education Association can raise gobs of money for Democrats and it’s not a problem because they represent Democrat teachers, but a super PAC for Florida Sen. Marco Rubio is “ridiculous” — even though guys like me think his ideas represent us. 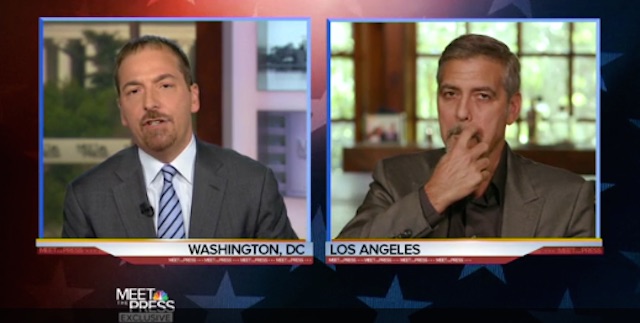 Personally, I think money in politics is overrated (just ask…Marco Rubio! — or any number of Republicans who spent millions of dollars and lost the 2016 Republican presidential primary). If George Clooney wanted money to have less influence on the political process, then he would become an advocate for limited government. He cries about cronyism while asking voters to fuel the vehicle that drives it, but I digress.

The point here is that Clooney, like his buddy Leonardo Dicaprio, is a political hypocrite. Sanders, although a self-avowed socialist who thinks bread lines and food shortages are cool, is 100 times more principled than Hillary Clinton and should be given credit for that.

The reason why men like Bernie Sanders and Donald Trump have attracted millions of supporters is because they are sick of George Clooneys on both sides of the political spectrum. A candidate cannot say, “[insert behavior] is morally wrong, but I will do it anyway if it benefits me politically … and then maybe it will change when I’m elected.”

Here is where it gets interesting. Comic book writer Kurt Busiek decided to weigh in on the issue over at Deadline Hollywood. In his defense of Clooney’s hypocrisy he inadvertently exposed the danger of leftist activists who essentially push for the U.S. to unilaterally disarm when it comes to nuclear weapons.

“Unilateral disarmament leads to losing,” according to Busiek. “[Clooney’s] point is that it’s bad to have this kind of money in politics overall, not that it’s okay for everyone else but his favored candidate shouldn’t get any.”

If unilateral disarmament “leads to losing” when it comes to campaign-finance reform in American elections, then why would the same idea applied to national security not “lead to losing” between the U.S. and nation states that publicly express a desire to see it wiped off the face of the earth?

Every year activist groups like “Global Zero” try to gain the support of Hollywood activists like George Clooney’s buddy Matt Damon. These actors push for massive reductions of U.S. nuclear weapons, despite the fact that such moves would be cheered around the world by rogue nations.

The answer is bad no matter how you slice it.

The moral of the story here is that modern-day liberalism is a tangled knot of contradictions:

Now if you’ll excuse me, I have to sit back and marvel out how Hollywood activists, election-year politics, and comic books all came together for a blogger who loves to write on each issue.

Exit question: What kind of person plops down $353,400 to eat dinner with a politician? Is there anyone alive whose existence would make you say, “I’d spend $350,000 to eat a seared salmon and parsley-caper sauce with that guy,”?