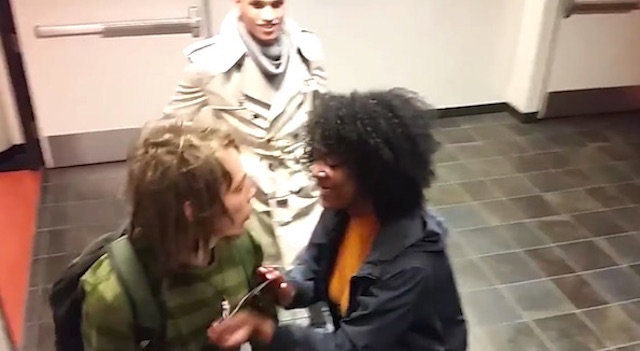 Not a week goes by that some college campus proves yet again that America’s future tyrants are ready and willing to plunge us into 1,000 years of darkness as soon as the opportunity presents itself.

San Francisco State University wins that dubious distinction this week, where a black woman literally cornered some dreadlock-sporting white kid, grabbed him by the clothes, and harassed him about “cultural appropriation.”

Yes, we have reached the point where Social Justice Obsessives are so mentally unstable that they deem themselves Haircut Police and start physical confrontations with complete strangers.

“You’re saying that I can’t have a hair style because of your culture? Why?” said the stunned student.

“Yeah, because it’s my culture,” the woman replied.

Here’s where it gets Twilight Zone-quality weird. The woman grabs the guy as he tries leave her nuttiness behind, but when he tries to push her off she then accuses him of touching her!

“You put your hands on me, you gonna learn,” the race-psycho said.

When will colleges reach peak stupidity? Professors pump their students with totalitarian mind gruel and then the rest of us have to deal with the blowback in the real world. A small part of me wishes I was back in college so I could deal with these bullies face to face.

Here is the statement SFSU released once the story spread like wildfire on social media, via KRON-4.

“We are aware of the video made of an incident which occurred on campus yesterday afternoon. University police were called to the scene of the incident when it occurred. The two individuals involved in the incident are not San Francisco State University employees. Further, no criminal charges have been pressed at this time to the University’s knowledge.

San Francisco State University promotes the rights of the campus community to engage in free speech, but does not condone behavior that impedes the safety or well-being of others. We are taking the matter seriously and will promptly and thoroughly investigate this incident through applicable University channels, including our campus student conduct procedures.”

SFSU, if it is anything like most institutions of “higher learning,” does not promote free speech. Ask author Ben Shapiro, who routinely has presentations derailed because of threats and hecklers, if free speech exists on the modern college campus.  The answer: “No.”

Imagine a situation where the white kid pushed this female bully the moment she laid hands on him, she fell to the ground, and then filed a complaint minutes later. How much do you want to bet that he would have been disciplined by SFSU administrators instead of her?

Monstrous seeds have been spread across the country and they are bearing bad fruit. It is not likely that pensive white kids with dreadlocks will be able to uproot these disgusting plants, but hopefully there are others who will answer the call. If not, then stay tuned here as I continue to chronicle America’s descent into politically correct madness.