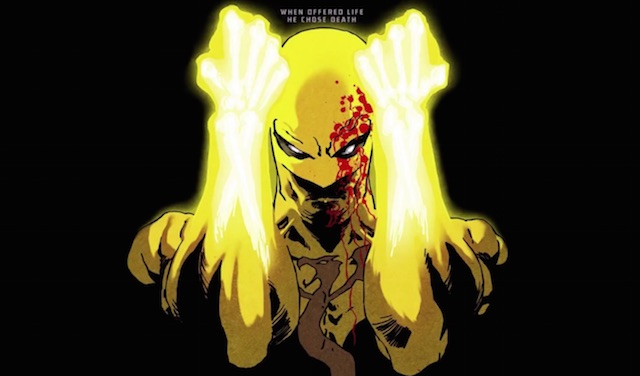 This blog previously covered the collective ulcer Marvel’s Iron Fist was giving Social Justice Obsessives prior the official casting announcement. Work prevented me from circling back on their meltdown after Finn Jones of “Game of Thrones” landed the part, but as luck would have it a friend of mine sent The Great Iron Fist Lament of 2016 by i09’s Rob Bricken. His smug is so strong that he even applied it to the headline: “It Actually Really, Really Sucks That TV’s Iron Fist Is White.”

Does it “really, really suck,” or does it only suck in the mind of pasty-white Rob Bricken and his social justice obsessed friends?

Yes, it’s true that the comics character Iron Fist is white, and thus it is indeed technically accurate for a white guy to play the role on TV. But technical accuracy does not equate “the right thing,” for lack of a better term. Because as with so many superheroes, there is nothing about the character of Iron Fist that requires him to be played by a white person. Nothing. It is fundamental to no aspect of his personality, his origin, his powers.

To men like Rob Bricken, the creator is not the lone arbiter of what constitutes “the right thing.” Instead, it is weirdly up to Rob Frickin’ Bricken.

It tends to be the Brickens of the world who say Luke Cage’s “blackness” is a “fundamental” aspect to his personality (even though Cage could have just as easily been a Mexican or Vietnamese immigrant facing similar circumstances), but yet when a character is white … then the color of his skin is inconsequential. Telling.

In fact, Iron Fist is unique among Marvel’s other superheroes that have made the leap to live-action in that making him, say, an Asian-American would have unequivocally improved him. Why? Because Iron Fist never should have been white in the first place.

Again we see Bricken behaves as though he is some infallible being, a Lady Social Justice of sorts, blindfolded with the “Scale of Should” extended in his right hand. When a creator comes to The Wizard of Bricken with a new character, it is Rob alone who determines what its race should be.

Any time an activist gets up on a moral pedestal and starts ordering creators or fans around in terms of what the race of a character should be, then fans have an obligation to knock him off it — hard. The wannabe totalitarian is strong in the social-justice types, which is why it is necessary to always push back against their claptrap.

His character was, and is, an appropriation of Asian culture —no different from American Ninja, Shogun, The Karate Kid, The Last Samurai, and all the other movies/comics/stories where a white guy discovers a foreign culture, learns its ways, and becomes better at it than the people born into it. It is both crappy and a cliché, and one that still gets used too often. This obviously wasn’t considered a problem in the ‘70s, but it sure as hell is a problem now.

How pathetic does a man need to be to get bent out of shape over Ralph Macchio’s “Daniel” getting trained to take on the Cobra Kai by Pat Morita’s “Mr. Miyagi”? Since when did Asian people get sole custody of martial arts? The answer to the second question is never.

No American should ever apologize for enjoying the Karate Kid, Iron Fist or any other work of fiction that allegedly “appropriates” Asian culture.

Note: Nowhere in China is there an Asian Rob Bricken telling artists to stop writing about robots because Western Civilization embraced the fusion of science, technology and free markets for hundreds of years while rulers in the “Middle Kingdom” scoffed at compasses and telescopes as children’s toys.

But here is the kicker:

Besides racists, there’s only one group of people who had an emotional stake in keeping Danny Rand a white guy, and that’s the small group of die-hard Iron Fist fans for whom changing anything would be a betrayal of the highest order.

There it is — the telltale sign of the social justice goon — the “you’re basically a racist if you disagree with me” card.

I’m not a die-hard Blade fan, but I would be annoyed if a director turned him into a white guy. I’m not a Storm fanatic, but I wouldn’t want her to be Russian. That’s because I think creators who adapt material for different platforms should try as hard as they can to be loyal to the source material. But to smarmy io9 editors, there are only “die-hard fans” and “racists.”

Every time these clowns pull the “racist” card they need to be mocked and ridiculed. They have no convincing arguments, so they try to shut down debate by sliming critics as racists, bigots, homophobes, etc. The only intolerant ones in these discussions are the people claiming to be society’s paragons of tolerance.

There was very clearly a right choice here, and Marvel didn’t make it. Be upset. Let them know. And don’t let them forget it.

Patrick Henry once implored, “Give me liberty or give me death!” as the colonies were on the brink of war with England. Today, every single online Rob Bricken thinks he’s a patriot when he melodramatically laments the race, gender or sexuality breakdown of fictional characters. Sad.