Chris Pratt 100% right on success: ‘Apply constant pressure for as long as it takes’ 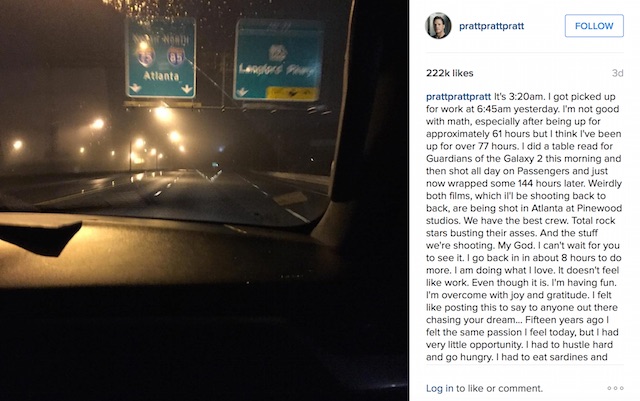 It’s not often that a Hollywood actor talks about the recipe for professional success — and nails it. Guardians of the Galaxy star Chris Pratt took to Instagram on Jan. 27 and did just that.

prattprattpratt It’s 3:20am. I got picked up for work at 6:45am yesterday. I’m not good with math, especially after being up for approximately 61 hours but I think I’ve been up for over 77 hours. I did a table read for Guardians of the Galaxy 2 this morning and then shot all day on Passengers and just now wrapped some 144 hours later. Weirdly both films, which iI’l be shooting back to back, are being shot in Atlanta at Pinewood studios. We have the best crew. Total rock stars busting their asses. And the stuff we’re shooting. My God. I can’t wait for you to see it. I go back in in about 8 hours to do more.

I am doing what I love. It doesn’t feel like work. Even though it is. I’m having fun. I’m overcome with joy and gratitude. I felt like posting this to say to anyone out there chasing your dream… Fifteen years ago I felt the same passion I feel today, but I had very little opportunity. I had to hustle hard and go hungry. I had to eat sardines and figure out how to get gas money. And I never had a plan B. I never stopped believing. Ever. Don’t give up. Apply constant pressure for as long as it takes. It will break before you do. Go get it.

Mr. Pratt is 100% right. To prove it, I will share just one example from my own life that testifies to the authenticity of his claim.

Roughly 15 years ago I not long removed from the U.S. Army and on my way to USC. I used to read The Drudge Report and think how cool it would be to one day write something that garnered one of his top headlines.

This past Tuesday I wrote a piece for work and once again experienced that unique feeling that only happens when a dream others call crazy becomes a reality. 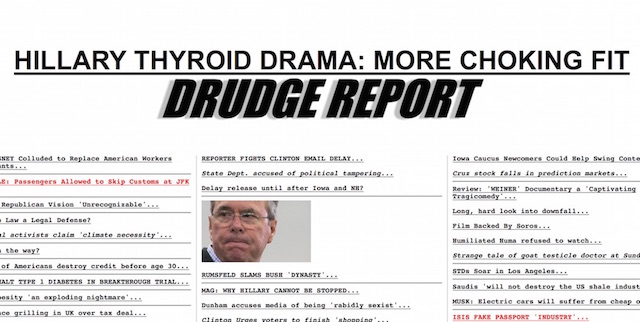 In the 15 years between dreaming about landing a bullseye Drudge hit and actually doing so, there were three roach-filled apartments, stretches were I was literally licking Chipotle burrito bowls clean because I was so low on cash I didn’t want to waste a calorie, and a temporary “mattress” made of my own clothes on a hardwood floor in Washington, D.C.

One section of Mr. Pratt’s message in particular hit home with me: “Apply constant pressure for as long as it takes. It will break before you do.”

That comment echoes something I have told my wife for years. I have always said that with enough time and pressure, we all have the ability to bend reality to our will.

There are many factors that affect how quickly one manifests a particular dream (which I would be happy to discuss in the comments section), but the following is a blueprint that has worked extremely well for me over the years.

One simply cannot go wrong if he or she follows those bullet points. It is a breath of fresh air to see a well-known actor who gets it, and for that Mr. Pratt has earned a large amount of good will with this writer.

I look forward to seeing both Guardians of the Galaxy 2 and Passengers in theaters.