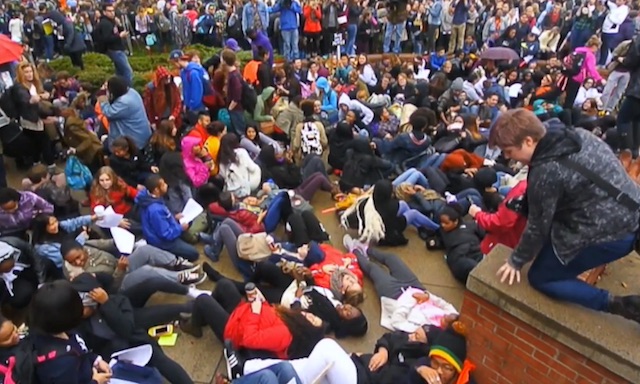 Somewhere in between Gender Studies 101, partying, putting money on meal cards, and sexual exploration, Ithaca College students are allegedly bombarded with racial injustices. Sometimes, people say mean things. It apparently hurts their feelings more than it hurts the skulls and spinal cords of gay men thrown off tall buildings by the Islamic State group in Syria. And so, there must be a “no confidence” vote in Ithaca College president Tom Rochon.

College faculty and staff must now reap what they have sown.

Members of the campus community walked out Wednesday “for all the injustices students of color face on this campus and other colleges nationally. With University of Missouri’s president stepping down, we demand Rochon to do the same as it is vital to fight against both covert and overt racism in all places of education and empowerment,” according to the event Facebook page.

In a statement issued after the protest, POC at IC said they want to make one thing loud and clear: “We are here, and we demand change.” …

“Diversity and inclusion here at Ithaca College is nothing more than an image,” one protester said into a microphone. Many in the crowd responded with cheers and clapping. …

Those sentiments were echoed by a woman who stood with POC at IC, shouting from Free Speech Rock: “We desire his resignation, not his input.” She went on to list some goals, including Rochon to resign or be removed from his position, a “radical transformative change in government and structure at Ithaca College” and “we want to bring a sense of safety, emotional stability and dignity to the experiences of POC at IC, other marginalized groups and the intersection between us as well as the entire Ithaca College community.”

What is Mr. Rochon’s offense, you ask?

Answer: He is not a member of the Precrime Police Department from “Minority Report.”

There have been several controversial incidents this semester, including a Blue Sky Reimagining Kick Off event in October that was meant to “formulate ideas about the evolution of Ithaca College.” During the event, an alumna on the panel, Tatiana Sy, a woman of color, said she had a “savage hunger” to succeed. However, two other alumni on the panel then referred to Sy as a “savage” throughout the event. Future Blue Sky Reimagining events have been put on hold.

After the Blue Sky event, Rochon issued a statement that he had apologized to Sy and regrets that the event was diminished by “insensitive comments.” He went on to say, “In general, the college cannot prevent the use of hurtful language on campus. Such language, intentional or unintentional, exists in the world and will seep into our community. We can’t promise that the college will never host a speaker who could say something racist, homophobic, misogynistic, or otherwise disrespectful.

Behold, the fragile mind of modern youth — so delicate and brittle that it crumbles with every episodic instance of unwelcome rhetoric. It’s not hard to guess who would be the first to fold in a mainland invasion of America by its future enemies. But I digress.

This is only the beginning. The roller coaster of weird is just pulling out of the gate.

The anti-free speech “muscle” of Mizzou had a big win on Monday, which means that its allies on campuses across the country will now seek to duplicate or surpass their ideological peers. I implore any young person attending college to push back twice as hard the next time your wannabe police-state overseers request “muscle” to do their dirty work.

Buckle up, because this roller coaster looks like it will have plenty of twists and turns. And, as always, welcome to the Twilight Zone.