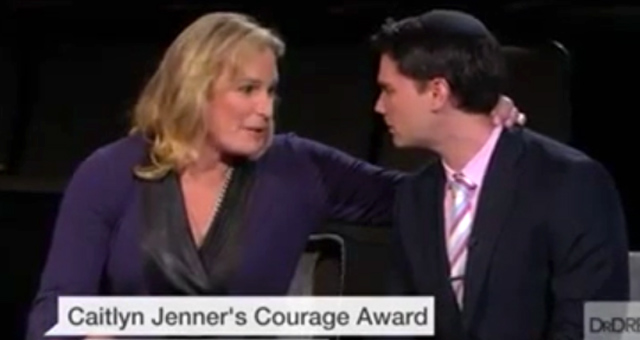 An interesting thing happened Thursday night on HLN’s broadcast of Dr. Drew On Call — a transgender reporter decided that the best response to Ben Shapiro’s questions about the mental stability of transgender individuals was to grab him by the neck and threaten to send him home “in an ambulance.” Mr. Shapiro — who has a law degree — didn’t flinch, and then proceeded to win what was essentially a 5-on-1 debate. If one considers Dr. Drew biased against Mr. Shapiro, then an argument can be made that the Breitbart News editor fended off six detractors in one sitting.

Here is what Mr. Shapiro said about Caityn Jenner:

“It turns out that every chromosome, every cell in Caitlyn Jenner’s body, is male, with the exception of some of his sperm cells. … It turns out that he still has all of his male appendages. How he feels on the inside is irrelevant to the question of his biological self.”

Inside Edition reporter Zoey Tur was none too pleased with Mr. Shapiro’s statement. After condescendingly putting her hand on the lawyer’s shoulder and saying “You don’t know what you’re talking about,” the conservative pundit shot back “What are your genetics, sir?” It was then that the threat of physical violence occurred. Ms. Tur said with her hand cradled around Mr. Shapiro’s neck:

“You cut that out now, or you’ll go home in an ambulance.”

Ben Shapiro’s response was classic: “That seems mildly inappropriate for a political discussion.”

The panel then found a way to brush off Ms. Tur’s boorish behavior by saying that Ben Shapiro was being “rude,” “egregiously insulting,” and “not being polite to the pronouns.” (Oddly enough, no-one called Ms. Tur out later on in the segment for being “egregiously insulting” when she went on to call Mr. Shapiro “little boy.”)

Here is the problem for intelligent conservatives: In a world where feelings rule, the man of logic becomes “rude” and his utilization of reason becomes “egregiously insulting.”

Consider this response by Mr. Shapiro when Dr. Drew asked what the “goal of treatment” would be if one believes that transgender individuals suffer from an incurable mental illness:

“The goal would be to allow people to live with it in an appropriate way — to flourish without imposing on the rest of society a necessity for fictionalized thinking. Okay, because that actually is a cost to society. I’m sorry. My grandfather was bipolar, okay? And he thought the radio was talking to him. They put him in a mental hospital. They did not tell him the radio was talking to him to allow him to live a better life — they put him in a hospital and then they gave him lithium, which allowed him to live a better life. Looking for better solutions than transgender surgery [since suicide rates essentially remain static with gender reassignment] would be a better solution than pretending that transgender surgery is the cure for people.”

This sort of reasoning — present throughout the entire discussion — was what the other panelists deemed “insulting.”

Ben Shapiro’s problem is that he is smart, he knows that he is smart, he refuses to allow feelings to trump facts, and he isn’t deterred when his critics raise their voices or threaten to send him home “in an ambulance.” This can come off as smug or uncaring, but that is only further evidence of just how far we have drifted as a culture away from a reverence for logic and reason.

When society has reached a point where “not being polite to the pronouns” brings a television panel to the brink of an all-out brawl, then something has gone seriously wrong. The fact that Ben Shapiro had to be countered with five dissenting voices indicates that it isn’t he or his “insulting” pronoun etiquette that is the problem, but those who are slaves to their emotions.

A man can “feel” like he is in love, but then use logic and reason to deduce that his heart is in fact just filled with lust.

A man can “feel” like he is doing right by his neighbor, but then use logic and reason to rightfully conclude that his actions are a recipe for long-term turmoil.

Ben Shapiro’s fears of what it would mean to live in a world governed by “fictionalized thinking” are not irrational. Americans would be wise to listen to a man who hurts their feelings with sound logic over one who soothes egos with falsehoods.