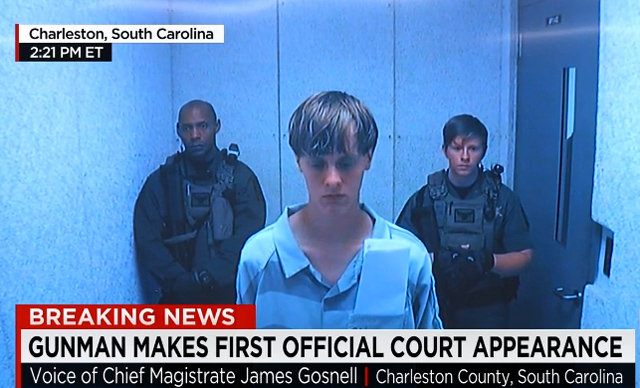 In a recent blog post I mentioned that God had the power to bring a greater good out of any act of evil. The world is seeing that play out just two days after a massacre that killed nine Christians at the Emanuel African Methodist Episcopal Church in South Carolina. Dylann Roof allegedly said he wanted to start a “race war” by slaughtering the innocents inside, but his actions only gave the world a taste of true Christianity: Family members of the victims have already forgiven him.

Dylann Roof heard words of forgiveness from families of some of the nine people he’s accused of killing.

His response: A blank expression.

Wearing a striped inmate jumpsuit, the 21-year-old appeared Friday afternoon by video feed at a bond hearing in Charleston, South Carolina. He stood motionless while listening to the anguished words of relatives of victims he allegedly gunned down Wednesday night at a Bible study at the historic Emanuel African Methodist Episcopal Church.

“I will never be able to hold her again, but I forgive you,” a daughter of Ethel Lance said. “And have mercy on your soul. You hurt me. You hurt a lot of people but God forgives you, and I forgive you.”

Watching the reaction of casual observers on social media indicates that many members of the Twitter mob have never really been introduced to true Christianity. If they were familiar with the religion, then they would know that Christians literally have no other choice but to forgive — our very souls depend on it.

Rev. T.G. Morrow talks about this very fact in his book Overcoming Sinful Anger. He says on page 25:

Forgiveness is one of the most fundamental things we are called to practice as Christians. Unforgiveness is an indication that we are not truly in touch with our faith. Must we forgive immediately? No, but we shouldn’t delay too long to begin the process. It may take time, but in the end, we must do it.”

A national audience of tens-of-millions of people will now be exposed to an awesome power that allows men and women to forgive cold-blooded killers in the blink of an eye. Millions of people whose only introduction to Christianity has been the jabs of light night comedians or the mockery seen on many sitcoms will now step back and seriously ask, “What’s going on here?”

Now consider this: all of it was seen by your Creator, but He is actually willing to forgive you for all of it — if you only walk towards Him with a contrite heart.

Dylann Roof may have wanted to start a “race war,” but at this rate it looks like his plan is going to spectacularly fail. One can only hope that he uses his time behind bars to revisit the faith that allowed his victims’ families to literally forgive him overnight.