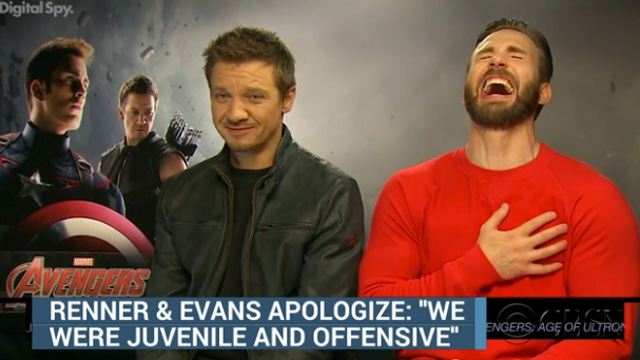 “Avengers: Age of Ultron” won’t be in American theaters until May 1, 2015, but “Avengers: Age of the Offended” can be found any time of the day on Tumblr and Twitter. Aliens and robots may not be able to defeat Hawkeye and Captain America, but professional whiners have shown that they can make Jeremy Renner and Chris Evans apologize for going off script.

Messrs. Evans and Renner made the mistake April 22 of believing that only rational adults would hear their interview with Digital Spy. Prickly men and women who go through life looking for things to “trigger” them made the actors pay for it immediately.

Digital Spy: I know a lot of fans were actually pretty invested in the idea of Natasha with actually either or both of you guys, and now obviously she’s with Bruce. What do you guys make of that?

Chris Evans: **laughing hysterically** I was going to say something along that line. She’s a complete whore.

Renner: What a trick, man!

The jokes show an odd lapse in judgment considering the millions of children who will watch the interview on YouTube. It would make sense for the actors to apologize to parents who weren’t expecting to get slut-bombed while watching promotional interviews with their kids. However, saying sorry to single women for calling a fictional Russian spy a “slut” is just another sad capitulation to online censorship cops. 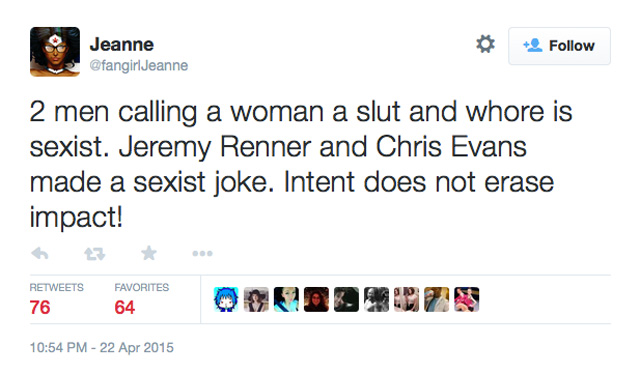 Note to the Jeannes of the world: They didn’t call a “woman” a slut — they called a fictional woman a slut. Regardless, Chris Evans and Jeremy Renner both promptly issued a blanket apology:

Chris Evans: Yesterday we were asked about the rumors that Black Widow wanted to be in a relationship with both Hawkeye and Captain America. We answered in a very juvenile and offensive way that rightfully angered some fans. I regret it and sincerely apologize.

Jeremy Renner: I am sorry that this tasteless joke about a fictional character offended anyone. It was not meant to be serious in any way. Just poking fun during an exhausting and tedious press tour.

The strange thing about the whole “slut” controversy is that it occurred at the very same moment Scarlett Johansson was telling a women’s magazine about the time Black Widow said she was “whoever you want me to be.”

I think my favorite thing about playing her is the character is you know very kind of slippery — she’s a slippery fish by trade — but in fact she’s very, she’s really honest. I mean she’s, it’s kind of an interesting dichotomy because you have this character who you would expect to be sort of —she says in Cap 2 ‘I’m whoever you want me to be,’ but in truth, when you’re talking to Natasha you’re really getting Natasha. She’s very straightforward and I like that part of her. […] She’s kind of a chameleon but then she’s very much like herself.

Black Widow is a “chameleon” who can be “whoever you want” her to be — unless it’s a “slut.” That is sexist. She must only be a supersmartindependentrolemodel (one word) — even though she’s a Russian spy who probably slept with men while undercover (or was that under covers?). 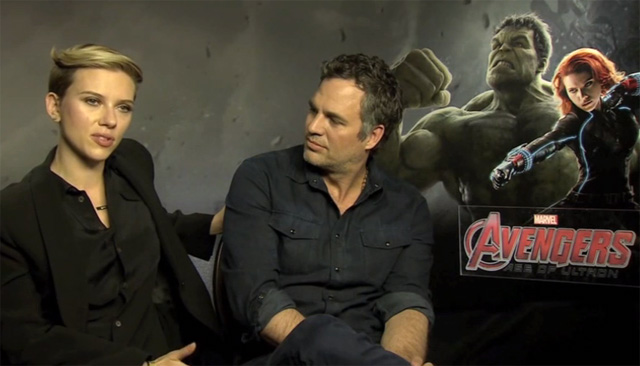 The one good thing about the apology offered by Messrs. Evans and Renner is that it refers to their comments as “juvenile and offensive.” At no point do the men give credence to accusations that their jokes (about a fictional character) were sexist. The full-time complainers were able to extract an apology from the actors, but it was one that was carefully worded to only apply to those with a legitimate gripe. Marvel Studios’ Hawkeye and Captain America were forced to join common sense in tactical retreat, but war was not totally lost. They’ll live to fight another day when “Avengers: Infinity Offended.”

Exit question: Is there any time that it is permissible for a man to jokingly call a woman (or fictional character) a slut in 2015, or is the word completely off limits to the perpetually-offended crowd?