Starbucks told America that it needed to have a conversation on race. In Atlanta, race activists decided this weekend that shouting at people who were minding their own business after church would be a better option.

For those who are unfamiliar with the “Black Brunch” campaign, activists have oddly deemed brunch to be an activity reserved exclusively for white people, and thus have moved to disrupt that aspect of the local economy. The reason: they seek to remind white people that “Black Lives Matter.” Members of these activist groups shout about Trayvon Martin, Eric Garner, etc., and then get upset when college kids getting by on minimum wage and tips ask them to leave.

Personally, I just feel bad for these activists. They’re so deluded that they think yelling at white people who are trying to have a nice meal with friends, family and loved ones is going to somehow engender sympathy and respect. In reality, such tactics are much more likely to lose potential allies forever. Then, when guys like me bring it up, they take to Twitter with “White dudes seem to have a lot of opinions on how Black youth leaders should protest.” Classic.

Black lives do matter in Atlanta and elsewhere, which makes me wonder why black people in Atlanta keep killing each other. That isn’t an opinion — it’s a fact.

The “Black Brunch” campaign did prompt me to look into black homicides in Atlanta, and the data leaves the activists with egg-covered faces. Maybe they should take that into consideration the next time they try to ruin someone’s brunch, but I digress.

In my quest to get to figure out who was really killing black people in Atlanta, I first wanted to find out how many homicides there were last year. Atlanta magazine reported that there were 84 in 2014. By a wide margin the victims were black, so I turned to the official Atlanta Police Department crime statistics to find out who was responsible. It turns out that it wasn’t old white women who like seeing their grandchildren for breakfast once a month.

Readers can feel free to peruse Atlanta’s uniform crime reports on their own. I have included two screenshots here, but there is plenty of data to swim through for those who are into that sort of thing. In short, it’s pretty damaging to the “Black Brunch” activists. If I was more energetic, then I would look up abortion statistics for Atlanta by race. Perhaps I’ll save that for another day. 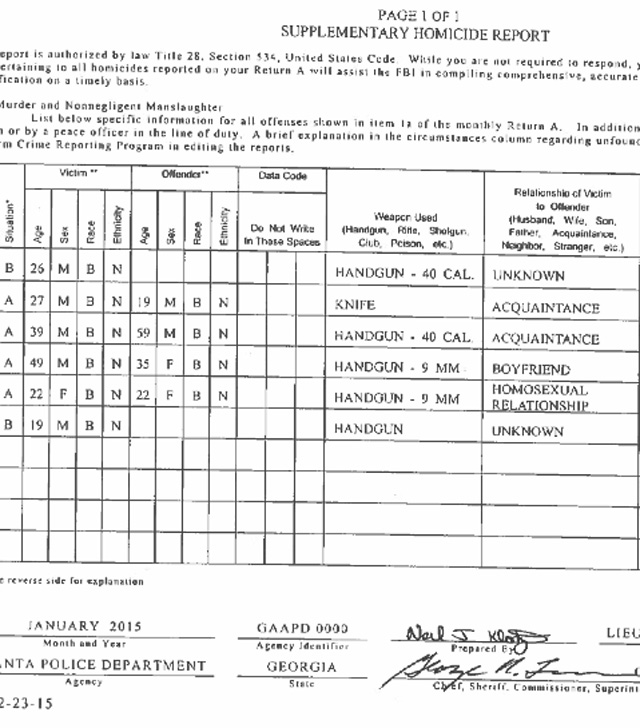 The trend that objective observers will find indicates that race activists in Atlanta do have a lot of work to do, but unfortunately it doesn’t involve making life difficult for small business owners in the local community. The national statistics provided by the FBI are just as bad.

Normally I’d end the blog post here, but since the go-to retort when guys like me use hard data to prove a point is to start talking about “white privilege,” I might as well refresh readers’ memories on a little incident involving Atlanta’s now-retired Judge Marvin Arrington.

For those who don’t remember, the judge — who is black — asked all white lawyers to leave his courtroom as he exploded on the young black men and women who were present for sentencing.

“I came out and saw the defendants, and it was about 99.9 percent Afro-Americans,” Arrington told CNN affiliate WSB-TV of Atlanta, “and at some point in time, I excused some lawyers — most of them white — and said to the young people in here, ‘What in the world are you doing with your lives?'”

The judge thought his message would make a greater impact if he delivered it to a black-only audience, he said.

“I didn’t want them to think I was talking down to them; trying to embarrass them or insult them; be derogatory toward them, and I was just saying, ‘Please get yourself together,'” Arrington said.

In his Tuesday night appearance on CNN, Arrington told Anderson Cooper that that seeing the same faces walk in and out of his courtroom year after year takes its toll.

That isn’t a “white dude’s” opinion — that is a “black dude’s” opinion who was so beaten down by the cultural decay within his community that he had a meltdown in his courtroom.

I do not enjoy looking up homicide statistics in Atlanta to make its local race activists look like petty clowns. There is no sick glee gained by pointing out uncomfortable racial crime data. However, when activists start acting like belligerent jerks, then it’s time to pour some cold, hard reality on their heads.