Obama: “ISIL is not ‘Islamic,'” but let’s talk about ‘terrible deeds in the name of Christ’ 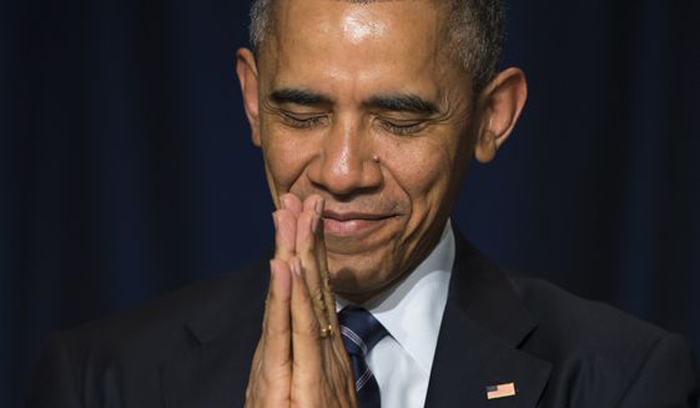 President Obama gave an address to the nation on September 10, 2014 in which he said “ISIL is not ‘Islamic.'” Today, at the annual National Prayer Breakfast, he reminded the world of that by oddly mentioning people who “committed terrible deeds in the name of Christ,” during the Crusades.

Only days after the Islamic State group began burning its victims alive, and only days after Boko Haram did the exact same thing in Cameroon (90 civilians slaughtered), Mr. Obama decided it was the perfect time to wag his finger at Christians over … the Crusades. Oddly enough, none of the president’s speechwriters thought it would be a good idea to remind him that the Crusades were born out of the need to push back against Islamic empire-building.

The president said that while religion is a source for good around the world, people of all faiths have been willing to “hijack religion for their own murderous ends.”

“Unless we get on our high horse and think that this is unique to some other place, remember that during the Crusades and Inquisition, people committed terrible deeds in the name of Christ,” Obama said. “In our home country, slavery and Jim Crow all too often was justified in the name of Christ.

“So it is not unique to one group or one religion,” Obama said. “There is a tendency in us, a simple tendency that can pervert and distort our faith.”

Islamic radical terrorist groups are chopping off heads and burning men alive in 2015, and president Obama’s brilliant idea is to start erroneously lecturing audiences on battles that took place around 1100. Worst of all, the man bends over backward to not mention Islam in connection with Islamic terrorist groups, and yet he is quick to throw out Christ’s name to admonish Christians. To rub salt in their wounds, it’s coming from a man who sat in “Reverend” Jeremiah “God d**n America! Dat’s in-da Bible!” Wright’s church for 20 years.

In Mr. Obama’s mind, the Crusades just sprang up out of nowhere. In Mr. Obama’s mind, Christians just marched off to Jerusalem to kill Muslims for no apparent reason. He believes it is inappropriate to call terrorism committed in the name of Islam “Islamic terrorism,” but it is appropriate lay guilt trips on Americans for the actions of the first settlers (never mind the fact that slavery in some form or another was practiced in all cultures throughout the history of mankind until Western Civilization took control).

The Spanish Inquisition claimed around 3,000 lives — or, put another way, 23 more than those lost during the September 11, 2001 terrorist attacks. The point isn’t to begin to start a tit-for-tat death toll debate, but to show that Mr. Obama’s bizarre warnings to Christians makes no sense when one considers the fact that Libya and Iraq have imploded, Afghanistan is a mess, Syria is on fire, and Yemen and Pakistan are giant question marks — right now.

Americans need leadership in this present moment, and all they’re getting from Mr. Obama is a poorly crafted history lesson.

Exit question: Who would you rather trust with your life: Jordan’s King Abdullah II or President Obama? The former Cobra attack helicopter pilot, or the community organizer?