Islamic State burns Jordanian pilot alive; Americans would be unwise to look away 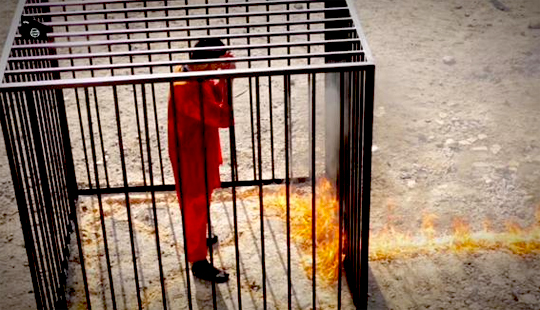 The Islamic State group entered a strange new dimension of killing on Tuesday by burning Jordanian pilot Moaz al-Kassasbeh alive. For those who have not been following the story, his F-16 was downed in Syria in December. The Sunni radical terror organization threatened to execute him unless the Jordanian government swapped prisoners for him on Jan. 26, and when the Jordanians refused the result was one of pure evil.

Video and stills appear to show a Jordanian military pilot being burned alive while confined in a cage. …

The 22-minute video begins with an attack on Jordan’s King Abdullah II, suggesting he is to blame for what happened to the pilot, Moath al-Kasasbeh.

The vast majority of Americans will never see the actual video. One can make a reasonable argument that it isn’t necessary to see a man burned alive to understand the threat the free world is up against with the Islamic State group and its ideological allies, but I think all too often the decision to turn away is rooted in the the desire to forget.

The reason why Michael Moore recently called the late Navy Seal Chris Kyle a “coward” is because Mr. Moore does not sit down and watch headline-capturing beheading videos when they happen; it’s a safe bet that he did not watch Lt. al-Kassasbeh’s gruesome demise. Likewise, it is easier for America’s critics to attack its foreign policy as some sort of unwarranted attack on Islam when the horrific actions of powerful Sunni terrorist organizations are swept under the rug. 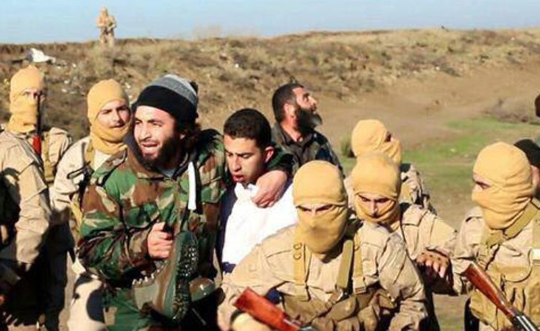 To make matters worse, the Pentagon seems to be saying things to convince the public that the Islamic State group’s behavior is rooted in desperation. The reality is much more frightening: chopping off heads and burning people alive is who they are.

Rear Adm. John Kirby held a press conference to address the situation and how the United States plans to respond. Kirby said that the plan was to degrade and destroy IS capabilities and continue to put them on the defensive.

When asked about the seriousness of the murders, Kirby couldn’t put it into words.

“I can’t–there’s no way I could possibly figure out how to justify it in your brain because it’s so twisted,” Kirby said. “These aren’t the acts of a winner. They’re not winning.”

How does one define “winning” against the Islamic State group, al Qaeda, al-Shabaab, Boko Haram, and others? There are any number of metrics one can use to show that if they aren’t winning, then they most-certainly are putting up an impressive fight. It also doesn’t help that the Obama administration keeps freeing the types of people from Guantanamo Bay who would jump at the chance for a front row seat to a pilot burning like Americans jump at the the chance to attend the Super Bowl.

All it would take is one demonically creative Islamic State commander to unleash all sorts of previously unimagined terror on the Western world. Americans are doing themselves no favors by burying their heads in the sand when faced with true evil. They should confront it head on, and one way to fully grasp the nature of these savages is to view what they are capable of doing to their enemies.