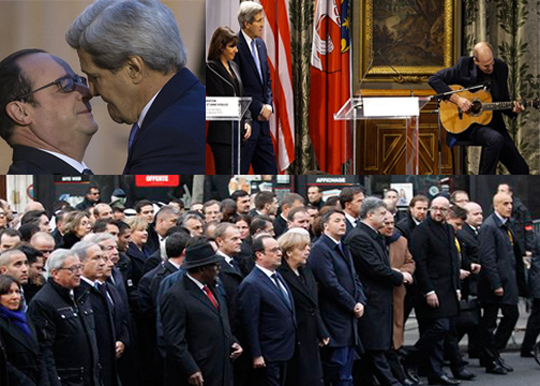 At what point does the most ardent supporter of President Obama admit that his administration is out of its league? The U.S. was not able to send a single recognizable figure to meet with 40 world leaders as 3 million free-speech-supporting Frenchmen marched through the streets of Paris, but a week after the fact John Kerry can come strolling in — with James Taylor.

Taylor performed a live rendition of “You’ve Got A Friend” as Kerry stood next to him.

“Close your eyes and think of me and soon I will be there to brighten up even your darkest nights,” Taylor sang softly.

The visit came after the White House admitted it made a mistake when it failed to send a high-profile US representative like Kerry to France’s massive anti-terror rally last Sunday.

Where does one begin? Perhaps there are some bongo-playing Baby Boomers out there who think this was a good idea, but in in general it’s just embarrassing. Imagine you are a woman in her mid-thirties and the guy you’re seeing starts making mix-tapes like you’re both still teenagers every time you want to talk about something important — that’s the State Department under John Kerry.

If James Taylor wasn’t available, would someone have asked Barbara Streisand to sing “No More Tears”? If she weren’t available, would someone ask Elvis Costello to sing “I Want You”? If John Kerry were a cellist with Yo-Yo Ma’s skills and he composed a personal tribute in memory of the victims of terrorism, then that would make sense; bringing in James Taylor to a diplomatic engagement is just weird.

If you feel like someone is playing a joke of gargantuan proportions on you, then just know that you are not alone.