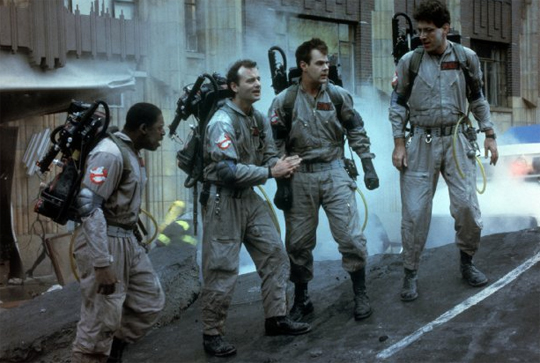 The world is getting an all-female Ghostbusters film that apparently doesn’t even take place in the same universe as the original movies. Why is it still called Ghostbusters then? Good question. Paul Feig of Bridesmaids and The Heat fame is taking on the project, but at the end of the day he would have been wise to take his own advice…

PAUL FEIG: I had been contacted by Sony and Ivan a number of months ago when I was in Budapest shooting my new movie Spy. But I was like, I don’t know if I want to take that on because the first two are such classics and just because of how do you do it? Who do you bring in now that Harold’s gone? I know that Bill didn’t want to do it and I love Dan, but it was just like I don’t know how to do it. Then I had lunch with [Sony Pictures co-chairman] Amy Pascal when I got back to town. She was just saying, gosh, nobody wants to do this. I said, yeah, it’s really hard to take that on, especially since it’s 25 years later. how do you come back into a world that’s had these ghosts and all this? It just felt too difficult. How do you do it and not screw it up?

Amy Pascal should have taken the fact that no one wanted to touch Ghostbusters as a clue that maybe it shouldn’t be done. Paul Feig’s gut told him that he shouldn’t take the project either, but then he came up with a not-so-bright idea: Let’s make a movie that isn’t anything like the original Ghostbusters, but then call it Ghostbusters so we can say that we did Ghostbusters. Genius! And if people don’t like my idea of having an all-female cast in this non-Ghostbusters movie, then we’ll just sit back and watch our friends in the media call them sexists.

As it turns out, Ernie Hudson — Winston himself — also thinks this is an odd idea.

“I heard it was going to be a total reboot, and that it would have nothing to do with the other two movies. If it has nothing to do with the other two movies, and it’s all female, then why are you calling it Ghostbusters? I love females. I hope that if they go that way at least they’ll be funny, and if they’re not funny at least hopefully it’ll be sexy. I love the idea of including women, I think that’s great. But all-female I think would be a bad idea. I don’t think the fans want to see that.”

Mr. Hudson is going to get himself in trouble with that “sexy” remark, but it’s hard to argue with his underlying point: Hollywood is forcing a bastardized version of Ghostbusters into existence, and Amy Pascal somehow thinks that fans of the original will be happy with that.

Paul Feig is obviously a talented man, but calling a film Ghostbusters that is almost completely divorced from the original is not a good way to win over its fans. If he can propel this movie to box office success, then he will deserve every penny that Sony pays him.