D’Souza’s ‘America’ reminds us: As free men ‘we must live through all time, or die by suicide’ 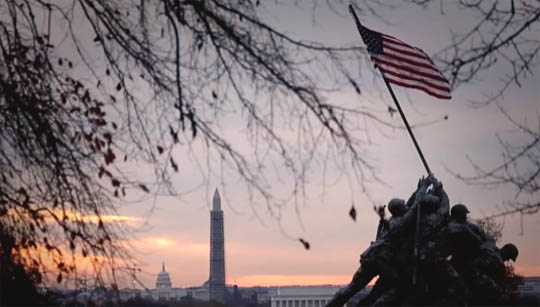 Dinesh D’Souza’s ‘America: Imagine a World Without Her’ is an important book. It addresses what Abraham Lincoln knew long ago: “If destruction be our lot, we must ourselves be its author and finisher. As a nation of free men, we must live through all time, or die by suicide.”

“What kind of crazy American would want to end the nation?” is a logical question. The answer, however, is not a pleasant one. There are plenty of U.S. citizens who do not believe that America is, as George Washington put it, the “cause of mankind.” There are Americans who believe that America’s founding was so flawed that the only option is to “fundamentally transform” it, either through radical revolution from the outside or from a kind of stealth revolution from within. Mr. D’Souza directly rebuts the case against America made by men like Saul Alinsky, William Ayers, Noam Chomsky, Ward Churchill, Michel Foucault, Howard Zinn and their ideological allies.

What makes ‘America’ interesting is that many of the men covered in the book were interviewed by D’Souza for his upcoming movie by the same name. He isn’t afraid to let America’s critics have their say. He is confident that when those thoughts and ideas are placed side-by-side with an articulate defense of the principles of our founding, the wisdom of Washington will shine even brighter.

Any book that defends the America’s founding must address slavery, and as usual D’Souza does not shy away from the task. And, while it’s useful to have quotes on hand by former slave Frederick Douglass, who eventually believed that the U.S. Constitution guaranteed that slavery was an ugly “scaffolding to the magnificent structure [of America], to be removed as soon as the building was completed,” readers need more. Readers need to know that slavery wasn’t an American invention — but that it was present in all cultures up until that period of time. What is uniquely Western, he says, is not slavery but the abolition of slavery.

D’Souza adds another bitter pill for progressive men like Saul Alinsky (the author and “community organizer” who dedicated ‘Rules for Radicals’ to Lucifer, “the first radical”) to swallow: Christianity helped propel the anti-slavery movement:

Slavery became controversial for one reason: the influence of Christianity. …

Even atheists admit that the anti-slavery movements in England and America were led by Christians. I am not suggesting that the Christians were the only ones who disliked slavery. From ancient times there had been another group that dislike slavery. That group was called the slaves. So there were always reports of runaways, slave revolts, and so on. What Christianity produced was an entirely different phenomenon: men who were eligible to be masters who opposed slavery.

D’Souza then points out that while the seeds for ending slavery were planted by Christians (i.e., we are all equal in the eyes of God), the Founders in Philadelphia found themselves in an interesting predicament: the choice was not whether to have slavery or not. “Rather, it was whether to have a union that temporarily tolerated slavery, or to have no union at all,” because immediately ending slavery would have been a deal-breaker for the Southern states.

Abraham Lincoln said it well during the Lincoln-Douglass debates regarding the Declaration of Independence:

[The Founders] intended to include all men, bu they did not intend to declare all men equal in all respects. … They defined with tolerable distinctness in what they respect they did consider all men created equal — equal in certain inalienable rights. They did not mean to assert the obvious untruth, that all were then actually enjoying equality… They meant simply to declare the right, so that the enforcement of it might follow as fast as circumstances should permit.”

What would have happened to the nation in its infancy if the Founders pushed the slavery issue to the point that the Union dissolved from the get-go? The world would be a very different place. Ultimately, it did take a Civil War and hundreds-of-thousands of deaths to resolve the issue, but to assert that the Founders should have pushed the issue as they were preparing to declare independence from England is bizarre.

In short, ‘America’ is a good read and well worth your time. Luckily, if you don’t have a lot of spare time or $30 on hand for the hardcover you can see the movie when it lands in theaters July 2.

And yes, I will be reviewing the film.