Official: I thought ISIL’s plans were ‘preposterous’ — (Guess who’s back? Back again. Jihad’s back. Tell a friend!) 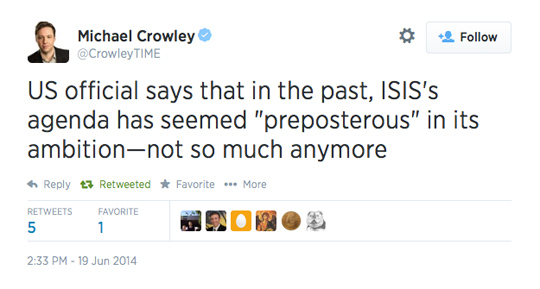 Chief foreign affairs correspondent for Time magazine Michael Crowley had an telling tweet today: “U.S. official says that in the past, ISIS’s agenda has seemed ‘preposterous’ in its ambition — not so much anymore.”

When radical Islamic extremists say they want to kill Americans, they find ways to kill Americans. When radical Islamic extremists say want to create an Islamic caliphate, they actively work around the clock to make that happen. It may take a century or two in their mind, but this many years after September 11, 2001 it is intellectually criminal for policy makers to dismiss their publicly stated plans.

The goals of the Islamic State of Iraq and the Levant have never been “preposterous” — the willful ignorance of U.S. politicians is preposterous. Sadly, even when American-jihadists openly state their intentions to “bring back the caliphate,” as if beheadings and stonings were no different than an Eminem album, the world refuses to take them seriously. (Guess who’s back? Back again. Jihad’s back! Tell a friend.)

Here is a newsflash from Minnesota Public Radio:

Over the past few months, as many as 15 young Somali-American men from the Twin Cities have traveled to Syria to join radical groups trying to overthrow President Bashar Assad’s regime, according to the FBI.

One of the men, Abdirahmaan Muhumed, told MPR News through a series of Facebook messages that he is fighting alongside the Islamic State of Iraq and Syria. ISIS, as it is commonly known, captured the Iraqi cities of Mosul and Tikrit this week.

Muhumed said in Facebook messages that ISIS is “trying to bring back the khilaafa,” a reference to an Islamic empire. He also said “Allah loves those who fight for his cause.”

Someone is recruiting Twin City terrorists and the FBI doesn’t know the point man. The scary thing is that you probably have friends and family members who aren’t too concerned that 15 Somali-Americans have packed up and headed off to Syria in search of the best terrorist training jihad can buy. Some of these guys will come back to U.S. shores as ISIL “veterans,” and when they do it won’t be pretty.

I normally don’t like to quote myself, but I will since this is a post about U.S. officials who are shocked at what’s going on in the Middle East:

If we return to the pre-9/11 mindset in order to combat Islamic terrorism, then we will have 9/11-type results. It’s really that simple. The delivery vehicle for their terrorism may very well be different, but the body count and subsequent effect on the economy will be the same or worse.

April 26, 2012: Why the West matters: Buried alive in Syria, sex with the dead in Egypt

Western Civilization is something special, but people have a way of taking the special things in their life for granted. For a long time now the United States—and more broadly Western Civilization—has been a beacon of light in a really dark, really weird world. The guys who are burying their countrymen alive and the ones crafting laws that would make it okay to defile a dead body—they play for keeps. If we don’t find our moral compass, speak up, stand up and fight for our culture then they’ll take that too.

They. Play. For. Keeps. That is the bottom line. Unfortunately, American officials refuse to take them at their word because to do so would mean that we would have to show commitment equal to — or greater than — their own to have a fighting chance at stemming the tide.

Here is what Abu Bakr al-Baghdadi told U.S. troops only five years ago:

The Islamist extremist some are now calling the most dangerous man in the world had a few parting words to his captors as he was released from the biggest U.S. detention camp in Iraq in 2009.

He wasn’t bluffing. He wants to bring terror to the United States, and his ideological friends across the world want to help him. Maybe one or two them will be from Minnesota if we don’t take them seriously.