Obama needs Iran’s Revolutionary Guard to help save him in Iraq, which means he has failed

As Iraq and Syria are being run over by Islamic radical nut jobs, the “blame Bush” crowd has been rather quiet. Perhaps that’s because it was only a few years ago that Vice President Joe Biden and the Obama administration were casting the relative stability in Iraq as a the next big “great achievement” … for them.

“I spent — I’ve been there 17 times now. I go about every two months — three months. I know every one of the major players in all of the segments of that society. It’s impressed me. I’ve been impressed how they have been deciding to use the political process rather than guns to settle their differences.”

Extremists from the al-Qaeda offshoot ISIS have blurred the border to Syria, captured Iraq’s second largest city, and advanced toward the capital. Kurds have taken Kirkuk, an oil-rich city in the northeast that borders Iraqi Kurdistan. Iran is deploying Revolutionary Guard forces to fight ISIS.

And, according to current and former U.S. officials, the administration of President Barack Obama indirectly facilitated the mayhem.

“Top State Department officials long argued that the civil war in Syria was the root cause of ISIS’s rise because it gave them a haven in which to operate and recruit,” Adam Entous and Julian Barnes of The Wall Street Journal report.

For the last two years, the main criticism on Obama’s policy toward Syria has been that the “United States, rather than read the signals early on and arm the Syrian opposition when it was making substantial gains, allowed a vacuum to form and then fretted when that vacuum was filled by jihadists.” …

When an American president desperately needs the Iranian Revolutionary Guard to help save the day, you know that he has failed — miserably. 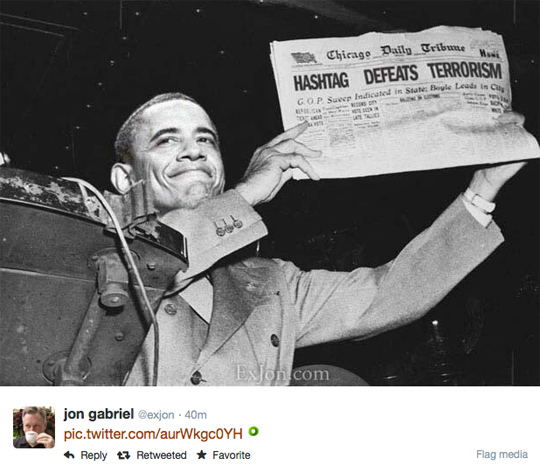 America now finds itself in a no-win situation. Essentially, we need a bunch of state-sponsored terrorists to kill a bunch of Sunni terrorists and then hope that the end result somehow results in a safer world for Americans. What are the chances of that happening? At the moment: Slim to none.

Some military officials now believe ISIS is the single greatest terrorist threat the U.S. and its allies face—stronger than the al Qaeda affiliates in Yemen or Africa and far more powerful than al Qaeda’s central leadership in Pakistan. Other senior U.S. officials say ISIS has yet to carry out any attacks directly targeting the U.S.

“It makes you want to kill yourself,” a senior U.S. official said of the intelligence on ISIS, which was presented by U.S. and Gulf allies during the May [security] meeting in Jeddah.

Why would an official say such a thing? Answer: Because he or she saw the enormity of the task before us and knew that a.) it was either too late to stop the blow back from reaching American shores, or b.) that the Obama administration was not capable of doing what needs to be done to reverse the jihadist tide.

This is going to get much worse before it gets better, in large part because the president is a political creature. The Middle East only presents a U.S. president with a multitude of difficult choices, and up until this point Mr. Obama has done his best to simply wash his hands of the matter. Only, that isn’t an option any longer. The world’s attention is on him and its waiting for an answer.

As Business Insider points out, his choice to simply look away since 2008 allowed problems to “fester.” The problem — Islamic terrorism — a term the White House didn’t even allow the State Department to use, never went away. In fact, it thrived in the chaos created by Syria’s civil war. And now it can not be denied any longer.

ISIS seeks to create an Islamic caliphate, and regardless of the upcoming battles it faces with the Iranian Revolutionary Guard, Iraqis or coalition partners, it is now a force to be reckoned with. If you believe in the power of prayer, I suggest saying a few for Mr. Obama; he’s going to need as many as he can get in the months ahead.

Related: Remember Obama’s failure to secure a status of forces agreement with Iraq as it burns