Drudge is right: ‘In this manic Digital Age… It’s vital… To clear your mind… Constantly’

Written by Douglas ErnstPosted on May 19, 20148 Comments 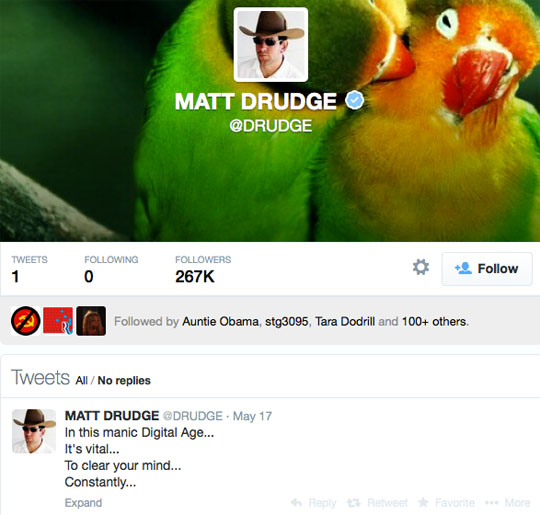 If you follow Matt Drudge on Twitter, you’ve already seen that he’s deleted all his tweets except one: “In this manic Digital Age…it’s vital…to clear your mind…constantly.” He’s right.

The great thing about the internet is that more information than ever is available at the touch of a button. MIT courses are available for free online. If you need to know how to fix a hole in drywall (as I recently did) you can learn how to do it in minutes. If you want to learn about octopus camouflage, you with one quick Google search. If you want to learn about all the times much of Virginia has been under water over the course of millions of years — to the dismay of the Climate Change crowd — you can do that. The problem is that there is so much information available that sometimes it’s easy to get lost and confused if you’re not grounded and viewing it all through a principled perspective.

Last year I mentioned that I began meditating. There were many reasons for that, but one was to clear my mind on a regular basis.

Have  you ever tried drinking from a fire hose? Probably not, but it’s obvious that it would be a rather unproductive experience. The news consumer today often finds himself trying to drink from a fire hose of information. Unscrupulous individuals know that this is what many people are doing and they use it to their advantage. Scandals — legitimate scandals — fall to the wayside because the “hose” keeps going 24 hours a day. A story that happened a day ago feels like it’s a week old. A story that happened a week ago feels a month old, and so on and so forth.

The Washington Free Beacon reported May 1 (which seems like ages ago, doesn’t it?):

The previously unreleased White House emails this week revealed a coordinated attempt to protect President Barack Obama during the 2012 election campaign and place the blame for the terrorist attack on the anti-Islamic YouTube video and not a “broader failure of policy.”

Baier pressed Vietor on his role in changing the talking points by adding a line about the administration warning the day before the attacks of “social media reports calling for demonstrations,” in order to bolster the false idea that the attack was the spontaneous result of a riot against the video. Vietor affirmed this, but when Baier asked him if he’d changed “attacks” to “demonstrations,” he got amnesia.

“Dude, this was like two years ago,” Vietor said. “We’re still talking about the most mundane process.”

“Dude,” Baier sarcastically shot back, “it is the thing that everybody is talking about.”

Vietor’s math is also off. The attack that killed four Americans took place Sept. 11, 2012, less than 20 months ago.

If your mind is not clear — and if you are not principled — it becomes very easy to adopt the “dude…that was ages ago” mindset for any number of events that should occupy a more prominent place in your consciousness. In a weird way, the sheer amount of information available has turned many people into human goldfish; they only make decisions based upon the most recent twitter hashtag or newsworthy event happening…now….or now…or now…or now.

Say what you will about Matt Drudge, but he’s a very shrewd individual. There’s a reason why he’s been so influential for such a long period of time. He may be rather enigmatic, but he’s certainly worth taking seriously. “Clear your mind constantly” is advice worth taking in the digital age.

Now if you’ll excuse me, I’m going to do just that.