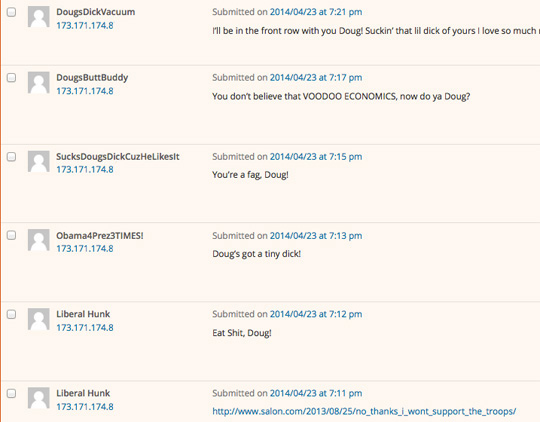 Normally I would never post some of the behind-the-scenes stuff that goes along with running a blog, but lately I’ve had to make the point while there are mean people out there, we always have the power to respond with dignity and class, or with venom and vitriol. Take for instance the above comments (I omitted the last number of  the IP address), sent to me today. Little did our liberal friend know that I’ve always wanted to get a comment from someone named ‘Doug’s Dick Vacuum’ because that’s what “fag” (his word) conservatives secretly desire.

What isn’t a secret is that sometimes I like when liberals are mean, because so often they disguise what’s really on their mind. This particular guy thinks it’s okay to hurl gay slurs and he apparently has a thing against the  military (just like many of my college professors).

The question becomes: How do you deal with it? Normally, I just sort of laugh and delete the comment. I’m not sure if I was supposed to be hurt or offended, but if so it didn’t work. Since the troll commented on my “About Me” page he must know I was once an infantryman. Translation: it is almost impossible to offend me. I might think someone is a loser, lost, confused or just plain stupid, but in general I think the best way to deal with someone like “Doug’s Butt Buddy” is to ignore them.

Since the “Liberal Hunk” who wants me to “eat shit” provided a link to a story about how mindless it is to “support the troops,” here’s an excerpt. It will give you an idea of what I had to deal with for six years as I went through my undergraduate work at USC and then completed my Masters at American University:

Who, for instance, are “the troops”? Do they include those safely on bases in Hawaii and Germany? Those guarding and torturing prisoners at Bagram and Guantánamo? The ones who murder people by remote control? The legions of mercenaries in Iraq? The ones I’ve seen many times in the Arab world acting like an Adam Sandler character? “The troops” traverse vast sociological, geographical, economic and ideological categories. It does neither military personnel nor their fans any good to romanticize them as a singular organism.

Again, it’s quite fortuitous that becoming an infantryman actually makes you immune to attacks on infantrymen. Internet trolls make you say “Yawn. Moving on.”

Hard-core liberals go completely silent as guys like Venezuelan President Nicholas Maduro mow down students in the streets, but they’ll go out of their way to portray American soldiers, sailors, airmen and Marines as mindless drones. These days, I usually just say a little prayer for the person and move on.

Perhaps the strangest trolling I ever received came from a website dedicated to finding out if I “hated America.”

The author (whose work I won’t link to, but you can find it quite easily) wrote:

“In asking that his superheroes be just as evil as he is, Douglas Ernst has set a new low for conservatives all over the country. You’d have to imagine that sometimes he cheers for the bad guys to win just so he can say the heroes should have tortured and killed more people to prevent disaster.

Things are starting to take shape now. Douglas Ernst can be compared to Adolf Hitler during his rise to power.”

Regular readers will find this post interesting, given that Superior Spider-Man creator Dan Slott has obsessed over a blog post where I called him out for flippantly inserting real-world genocidal maniacs like Hitler, Pol Pot and Genghis Khan into Amazing Spider-Man.

Note how Dan Slott handled the accusation that his character (who he put into Peter Parker’s body for over a year) was a monster worse than Hilter, and how I reacted to a the author of a website who literally compared me to Hitler.

On one side we have a comic book creator who was so offended that he took to almost every social media platform under the sun to scream about how offended he was; on the other side there was me, who basically ignored the guy.

My final response to him (at which point he ended his blog):

More power to you, sir. I’m confident my site will continue to grow, as it has done since day one. I’m also confident anyone who randomly lands on your little blog about me will think one thing: “It rubs the lotion on its skin,” — Douglas Ernst to author who dedicated a hate website to him.

As predicted, my blog has continued to improve and grow and thrive with new subscriptions.  The troll, seeing that his efforts would not alter me from my set course, eventually gave up.

Be the aircraft carrier. Don’t be the tugboat. You’ll be glad you did.

Update: The liberal troll referenced for the purposes of this blog didn’t like that I exposed him as a troll. I normally wouldn’t do this, but I’ll be nice: All of your trollish messages are now going into the trash. I will no longer see them. If you want to continue to shout strange things into a digital trash can, go ahead. It’s really big, so feel free to go on for as long as you’d like.