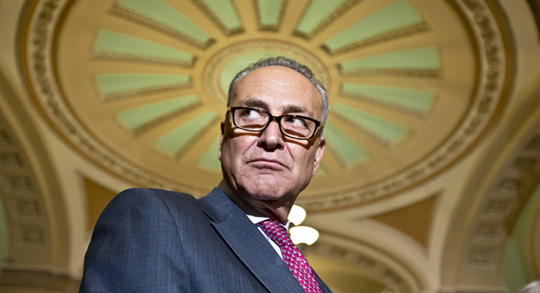 Every member of the committee — every one — has taken money from Comcast PAC. I now give you…crony capitalism:

The Senate Judiciary Committee held its first congressional hearing on the Comcast-Time Warner Cable merger Thursday, and every single member of the committee has taken money from Comcast PAC — even Democratic senator Al Franken of Minnesota, who is generally considered to be anti-Comcast.

Out of 18 committee members, 10 Democrats and eight Republicans, 17 got money from Comcast’s federal PAC, according to the database at OpenSecrets.org, technology website Ars Technicareported.

Ars Technica then confirmed with Mr. Franken’s spokespeople that he did accept $5,000 in Comcast PAC cash in 2009 for his recount fund, since OpenSecrets.org did not have that donation listed.

The full list of Senate Judiciary Committee members and the cash they’ve accepted from Comcast PAC donations are:

The sad thing is that there are people out there who still blindly defend the idiocy of both parties. No matter what “their team” does, they’ll defend it it to the death, which is fitting, since that’s exactly the kind of mentality that is killing the freest nation ever created.

Think of all the issues that senators influence, either through legislation or their close relationships with bureaucrat overlords in Executive agencies manning the administrative state. Now think of all the companies that know that if they just cough up the right amount of cash, that the guy or gal “representing” you in the nation’s capital will bend over backwards to find a way to vote against your best interests while still managing to hold onto a job. Infuriating, isn’t it?

If you want to get the nation back on the right track, find your friends and family members who defend the the most boorish behavior and inflammatory rhetoric displayed by the losers in their favorite political party, and then convince them that they are doing the nation a grave disservice.

Now if you’ll excuse me, I have to sit and think about how pathetic our state of affairs must be for me to bite the bullet and end a blog post with Calloway’s “I Wanna Be Rich.”